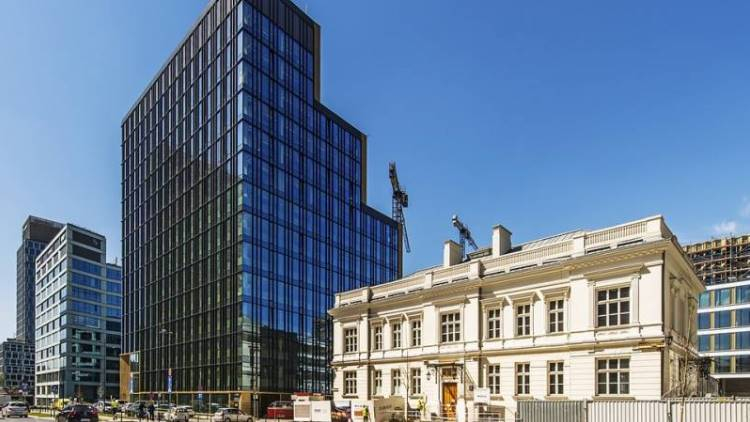 Construction work on Villa Offices, the highest commercial building in Warsaw Brewery mixed-use complex, has been completed by developer Echo Investment. WeWork will soon open its headquarters in the new office building.


Villa Offices is a 55-metre building with a total area of over 16,000 sqm. Tenants of global co-working office space network WeWork will soon be the first to start operating there. On the ground floor of the building, service premises are being built with completion planned for the end of 2020.

The building features bicycle racks, cabinets and drying cabinets are available in a garage, as well as two stations for charging electric cars. Office tenants also have at their disposal green terraces, located on the top floors where it’s possible to plant and care for various species of perennials, grasses and herbs. Such green roofs encourage birds to nest and are an attractive place for bees, butterflies and insects, which contributes to increasing urban biodiversity. The office building received an 'Excellent' BREEAM rating at the design stage.

In the immediate vicinity of The Villa Offices, Echo Investment is developing Malthouse Offices. It will be the largest office building in the whole complex. The facade of the building is almost ready with most of the works being carried out inside the building now. The list of tenants will include Grupa Żywiec and Allen&Overy. The completion of works is planned for Q3 2020.

Along Haberbuscha and Schielego Street, Gatehouse Apartments’s units are being fitted-out. The facade of the building is finished. 450 new apartments for long-term rent are being built here. Resi4Rent will hand over them to the first tenants in Q3 2020.

The entire Warsaw Brewery project is planned to be finished at the end of 2020. by Property Forum
Sale of office buildings, increase in the assets’ value, and the preparatory works for the next "destination" projects are the highlights of the financial results of Echo Investment for H12022.
Read more >