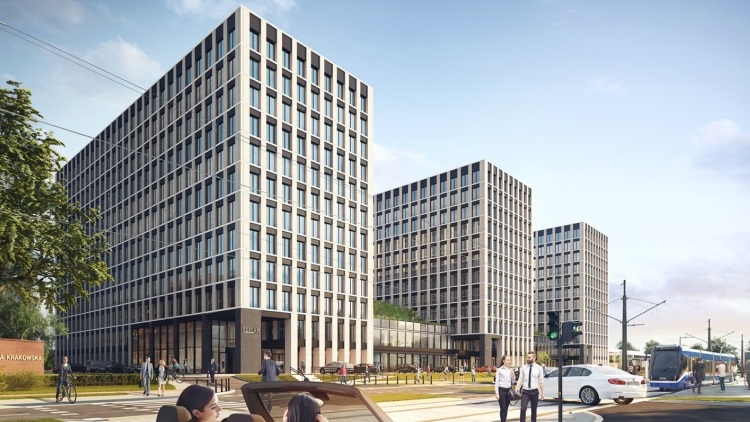 Construction works on the modern office complex Podium Park in Kraków’s Czyżyny are under way. In connection with completion of the pre-lock-up stage in Building A, Podium Investment started to perform finishing works. Currently, according to the schedule, lock-up stage works in Building A are under way. Completion of the first building is planned for the end of June 2018.

Podium Park is a modern complex made up of 3 office buildings. In each of them, above-standard environmental protection, technology and bicycle infrastructure have been planned. In addition, the project is one of the first in Poland to have obtained the prestigious BREEAM certificate at the Outstanding level.
Podium Park will have numerous facilities, such as electronic car, bicycle and scooter rental services, 36 electric car charging stations or exceptional urban farming zone.
The complex is being built in Kraków, at the junction of al. Jana Pawła II and ul. Izydora Stella-Sawickiego streets, in the immediate vicinity of the Kraków University of Technology, Kraków Technology Park, University of Physical Education and Tauron Arena.
In recent years Kraków has become one of the biggest office centres in Poland. Huge demand for office space results, among others, from very high interest of companies from the modern business service sector in the capital of the Małopolska region, developed infrastructure and huge numbers of educated staff. In response Kraków’s developers invest in innovative office centres, a press release by the developer concludes.
In 2016, over 50 thousand employees in the modern business services industry were employed in Kraków, which puts the city in the first position in Poland, ahead of Warsaw, Wrocław and the Tri-City.