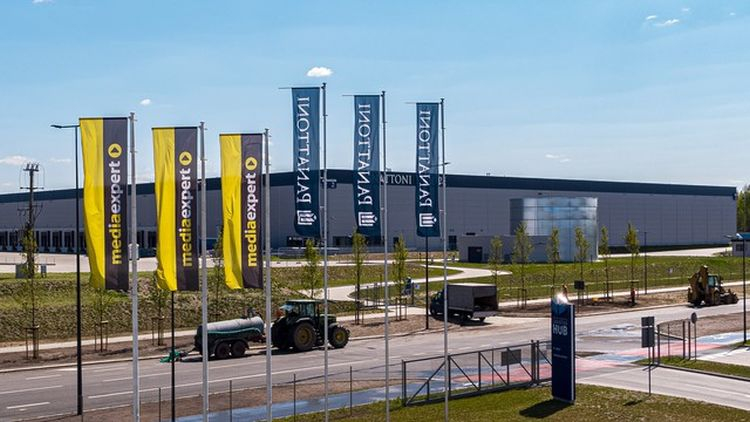 Panattoni will develop a third building for Media Expert within the Central European Logistics Hub in Łódź. At the end of January this year, the owner of the store chain was granted early access to the 80,000 sqm centre, which is to be combined with two other existing buildings to form a national distribution complex for Media Expert. All three buildings have a combined area of 233,000 sqm. As well as these buildings in the administrative capital of the region, the chain has also leased 23,000 sqm in Panattoni Park Stryków III.


Panattoni, having delivered 150,000 sqm to Media Expert in two buildings within the Central European Logistics Hub (CEL Hub) in Łódź, is now completing the third project for the chain within the complex. The developer is to hand over an 80,000 sqm building in February this year, just under a year since it completed the previous project, which also had a similar area, within the Hub. The building is to be connected to the other two, which are already operational, via a conveyor belt that will allow goods to be automatically dispatched. Work on developing the final building within the CEL Hub for Media Expert has been underway since May 2021. Altogether the electronics store chain leases over 300,000 sqm from Panattoni within Central Poland, which includes space in Panattoni Park Łódż East as well as Panattoni Business Center Łódź III and also Panattoni Park Stryków III, where it recently took up 23,000 sqm.

Marek Dobrzycki, Managing Director of Panattoni comments on the over-threefold increase in the amount of space occupied in the Central European Logistics Hub: “Another huge development within the Hub is a demonstration that the idea behind creating the New Industrial District of Łódź is sound. This is a unique development not only for Poland but for all of Europe, which is why we are pleased that it is becoming an important element in the development of leading companies from different sectors." And he adds: “The Central European Logistics Hub benefits from having a very good location, which has become even more attractive through the assistance provided by the city, for which we are eternally grateful.”

The three-building complex will fulfil the role of a centralised location for Media Expert, from which the company will serve its entire distribution chain. The company's extension of its warehouse space within the Central European Logistics Hub is due to the expansion of the chain and its continuous development. The company now sells goods in over 520 electronics stores in almost 430 towns and cities. A location in the central part of the country allows it to optimise its logistics chain and cut delivery times to individual customers (e-commerce, omnichannel) as well as to its brick-and-mortar stores.

The Central European Logistics Hub lies within the city limits of Łódź. Within the vicinity of the complex can be found a railway station and, in partnership with the city, a dedicated bus line has been set up. Furthermore, the complex provides many advantages to those operating a central warehousing facility. The development is situated on ul. Jędrzejowska in Łódź just next to the A1 – the only Polish motorway to run from North to South. The Hub is just 30 km from the Łódź Północ junction where the A1 and A2 motorways cross.

Eventually, the entire Central European Logistics Hub will have an area of over 720,000 sqm. Upon completion of the three buildings for Media Expert, the area of the Hub has reached 550,000 sqm. Other companies that have already decided to develop their operations in this location include BSH Sprzęt Gospodarstwa Domowego and SMYK. The Hub is driving the development of the New Industrial District in Łódź and has the possibility to create up to 7,000 jobs.