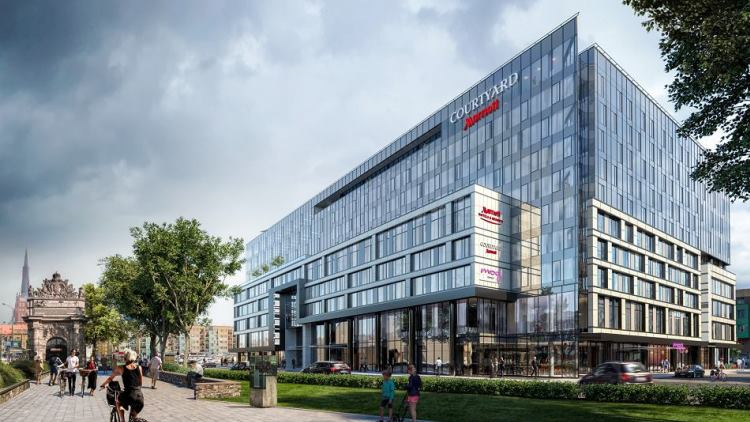 Polish developer Porto was granted a €29 million loan by the European Investment Bank via Bank Gospodarstwa Krajowego (BGP) for the construction of a mixed-use complex in Szczecin. Thanks to the application of pro-ecological technology, Posejdon will reduce CO2 emissions up to even 76% compared to a similar building constructed using a traditional technology.

The Posejdon service complex, located in Szczecin, is the largest low energy consumption facility (NZEB – Nearly-Zero Emission Building), i.e. one that in advance meets the most strict, future standards related to energy consumption, which all facilities will have to meet after 1 January 2021 in order to obtain a building permit, currently constructed in Poland. Due to application of modern, pro-ecological solutions, the entire complex will reduce CO2 emissions by even 76% in relation to a similar building constructed using traditional technology.
“Posejdon is constructed in a place well known to every citizen of Szczecin, which waited very long to regain its former glory,” said Marcin Woźniak, a member of the Management Board of Porto Sp. z o.o. “We have developed an ambitious and modern project based on three stable pillars: hotels of the largest global hotel network Marriot, modern offices, and a small, but well-conceived commercial part. Today, all facilities of this type are constructed like this all over the world.”
“As EIB, we are honoured to finance the first energy Nearly-Zero Emission Building in Poland,” said Vazil Hudak, the Vice-president of the European Investment Bank. “The bank already financed similar facilities in other countries, e.g. in Germany or Scandinavia. Together with our long-term partner BGK and out new client and investor – Porto, we are pleased to present the Polish project Posejdon right here, during COP 24 conference organised by the United Nations in Katowice. This project is an example of EIB’s support for pro-ecological city solutions in Europe as well as our fight against climate change through the financing of energy-efficient projects, in this case, in the real property sector.”
Paweł Nierada, First Vice-President of BGK, said: “One of the key goals of BGK’s activity is to improve the quality of life of Poland’s population. The financing of environmentally friendly infrastructure projects is part of our mission, which is to promote the country’s balanced development in social and economic terms. The joint commitment on the Posejdon project confirms the good, 17-year-old cooperation between BGK and the EIB. Thanks to this cooperation we have financed over time many projects, including the construction of the Lagiewnicka bypass in Krakow, around 800 km of motorways, more than 1200 km of expressways and 44 urban ring roads. We also cooperate on the Marguerite Fund II, a pan-European equity fund for infrastructure investments in renewables, energy, transport and digital infrastructure”.