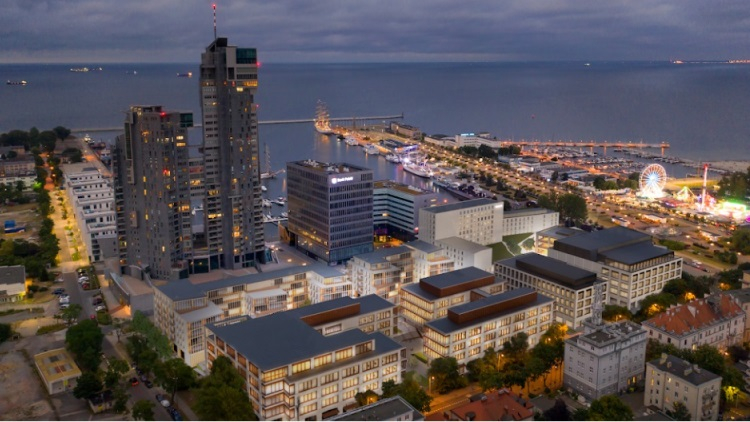 Vastint Poland has signed a contract with Budimex SA for general contracting services for the initial part of the second phase of the Waterfront complex in Gdynia. The planned investment will be built on Hryniewickiego Street, in the vicinity of Kościuszko Square, and will comprise the construction of four buildings totalling ​​45,000 sqm including underground garages. The general contractor plans to start construction in May of this year, with the investment scheduled for completion in 2023.


The planned investment is a continuation of the first phase of the Waterfront, which was commissioned in 2015 and included two buildings with office and hotel functions located directly at the Nadbrzeze Prezydenta (President’s Waterfront). The existing buildings will be supplemented with an additional 80,000 sqm of residential, office, and service space. Due to the scale of the planned project, it will be phased. Work will begin with the development of the section of the site on Hryniewickiego — while the driveway to the Marriott Hotel is maintained from Jana Pawla II Street — followed by the area directly adjacent to Kosciuszko Square, where the Gemini Center previously operated.

As part of the commencing stage, two office buildings with a leasable area of ​​14,500 sqm and two residential buildings behind them with 126 residential and commercial premises will be built along the frontage of Washingtona Street. The sale of apartments will be launched after the completion of construction, and all premises will be delivered in a ready-to-live-in standard.

The final part of the project will most likely be initiated with a one-year delay and is to comprise another office building, service premises, two hotels with conference space, and public and cultural facilities, including a cinema with eight screening rooms. An important element of the development is the public space adjacent to Kosciuszko Square, around which public life will take place. The whole will be complemented by urban greenery, meant to convey a seaside character and emphasize the variety of functional zones of the planned project. The design of this part of the complex will be completed in the coming months.

The architectural design of the Waterfront was created in the JEMS studio. The architects’ main goal was to create a space envisioned as the new heart of Gdynia, open not only to people working and living there but also to all city residents and tourists. The attractive development of the complex will be a showcase of the city and a favourite place to meet, work, and live.