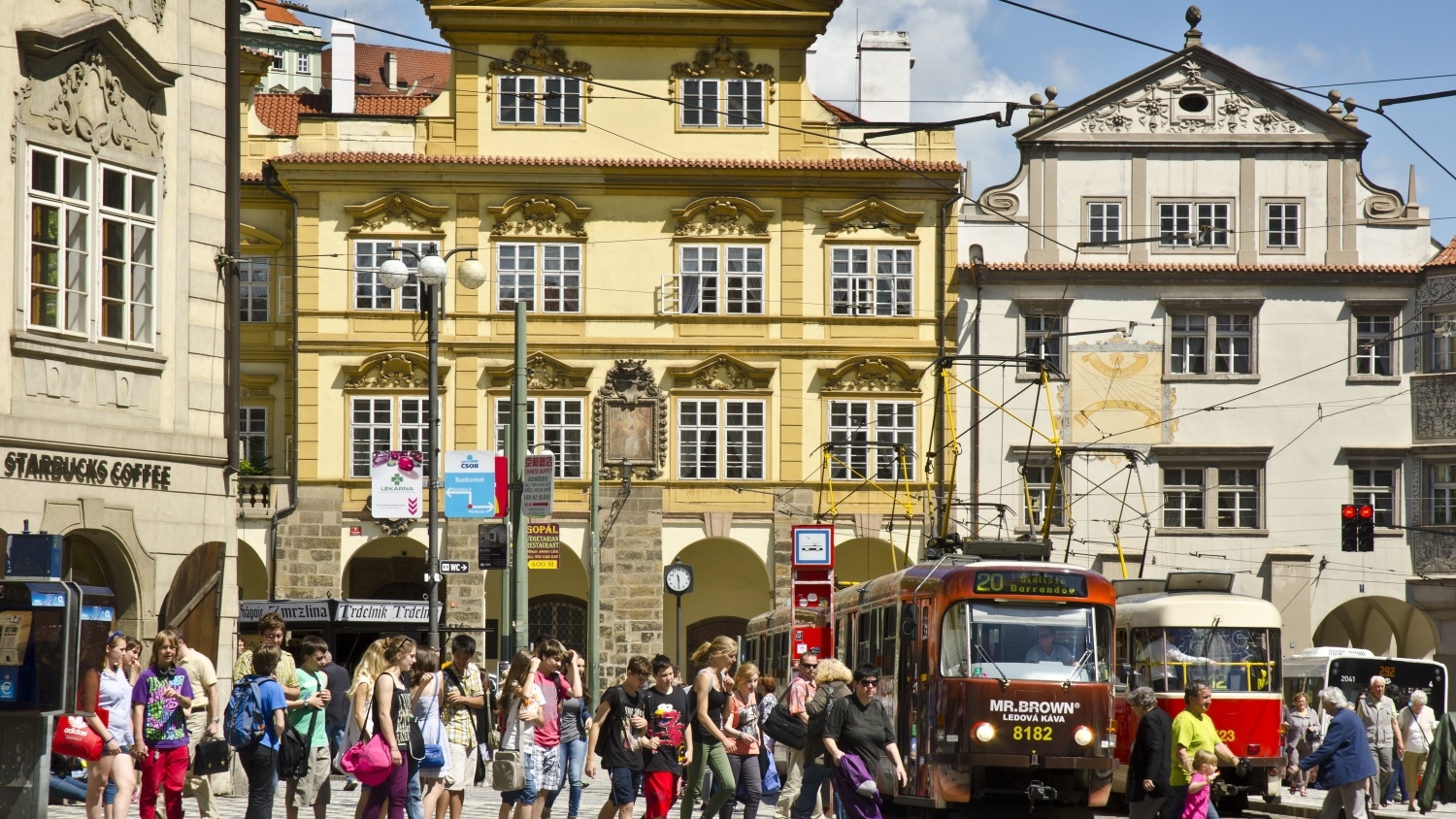 The total transaction volume on the CEE hotel investment market increased to €700 million in the first half of 2017 from the €630 million transacted in H1 2016. This represents a yearly growth of 11 percent which is significantly larger than the 0.3 percent growth registered in the western part of Europe. High yields, booming tourism and strong economic growth are the main reasons behind growing interest in the hotel markets of Central and Eastern European capitals on the behalf of international investors.

Regional hotel markets have outperformed the rest of the continent, with a RevPAR (Revenue per Available Rooms) growth of over 10 percent. Tourism is booming and CEE hotel owners expect the current positive momentum to continue into the future. 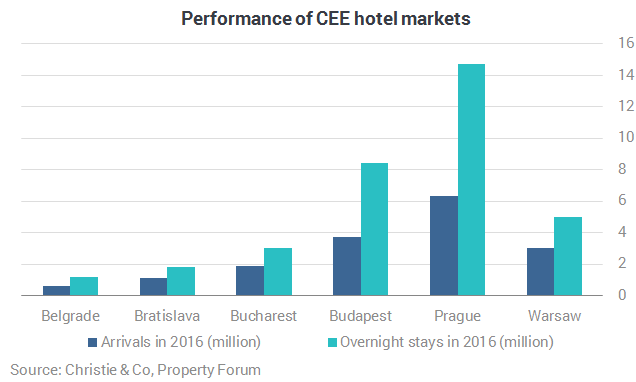 Belgrade
Based on most indicators the regional capital with the weakest results is definitely Belgrade. The past few years saw a significant increase in the number of available rooms which resulted in lower occupancy rates. The market, however, now appears to be absorbing this supply and hotel owners should now be able to push up the ADR.
Bratislava
The Bratislava hotel market closed a remarkable year in 2016. With both occupancy and ADR having improved, the Slovak capital registered the highest RevPAR growth in the region at 20.8%. Arrivals and overnight stays have increased exponentially since 2011, by 59.5 and 62.4 percent, respectively. These results are especially impressing considering the fact that both hotel and bed supply remained virtually unchanged during this period.
Bucharest
The Romanian capital can be considered the rising star of the CEE region. Bucharest has grown into an attractive meetings and events destination which coupled with major infrastructural developments has led to a strong increase in demand. Six years of economic growth in Romania have also positively affected the Bucharest hotel market. Over the past five years the number of hotel rooms grew by 19 percent, the number of arrivals grew by 7.7 percent, while overnight stays grew by 5.4 percent in Bucharest. This continued growth resulted in 1.9 million arrivals and 3 million overnight stays in Bucharest last year, a new record. RevPAR grew by 10.8 in 2016 and this positive trend is continuing into 2017.
Several new brands have announced entering Bucharest in recent years. The first Hilton Garden Inn will be opened this year in the capital to be administered by Apex Alliance Hotel Management. One of the major new projects that was announced this year is the opening of an Ibis Styles hotel in Northern Bucharest. Polish hotel group Orbis, the CEE partner of French group AccorHotels, has signed a management contract with local company Constructii Erbasu S.A. for a new 96-room hotel to be opened in 2018, after the conversion of the previous Erbaş Hotel.
Budapest
The Budapest hotel market is also characterised by strong demand from international guests. 90 percent of overnight stays were attributed to foreign guests in 2016. The market grew rapidly in recent years, with a record amount of 27.6 million overnight stays registered in the Hungarian capital last year. The first half of 2017 saw further growth with an increase of over 10 percent compared to the same period of last year.
Tourism is booming in the Hungarian capital which has paved the way for major new hotel projects. In many cases unused historical buildings are being rebuilt as luxury hotels. At the beginning of this year W Hotels Worldwide, part of Marriott International, announced that it will introduce the W Hotels brand in Hungary in 2020. W Budapest will be housed in the Drechsler Palace and it will feature 162 rooms and suites. This will be the second Central European location of W Hotels Worldwide after the opening of W Belgrade which is scheduled for September 2019. Deutsche Hospitality’s first CEE hotel is also set to open in 2019. IntercityHotel Budapest will be located in a newly constructed building in front of one of the city’s main railway stations (Keleti pályaudvar). The eight-story building will be owned by the Hamburg-based B&L Group. Continuing the list, Hilton has reached a franchise agreement with Accent Hotel Management to open the Hilton Garden Inn Budapest City Centre. The 214-room hotel is set to become Hilton’s third hotel in Budapest by 2018. These new developments, among others, are likely to give a further boost to international arrivals.
Warsaw
Unlike in most capital cities in the region, hotel chains dominate the Warsaw market with 64 percent of total supply belonging to hotel chains. In 2016 new supply was easily absorbed by growing demand which resulted in strong figures in the Polish capital. The number of arrivals grew by 30.1 percent last year and the number of overnight stays increased by 34.8 percent, which also gave a significant boost to other performance indicators such as occupancy, ADR and RevPAR.
Prague
Prague is a major tourist destination, a popular choice for business and leisure travellers alike, with the highest occupancy rate, ADR and RevPAR among CEE capitals. In 2016 the number of overnight stays reached a record high of 14.7 million, 90 percent of which was attributed to foreign guests. The Czech capital has the largest hotel market in the region and it is likely to keep its number one position in the coming years.

“The Budapest hotel market has performed remarkably well in the past two years with hotels in the city centre often operating with occupancy rates between 80 and 85 percent. It is unreasonable to strive for even higher occupancy rates, the emphasis should be put on increasing room rates, which is partly achievable by the expansion of MICE (Meetings, Incentives, Conferences and Exhibitions) tourism.
Thanks to new developments, 1956 hotel rooms are currently under construction with 2000 more being under preparation. Most new developments are in the 3-4 star segments, as entry requirements of the 5-star business are still very high. Due to the high costs of initial investments, luxury hotel developments often don’t break even within the first 20 years. With 3-4 star hotels construction costs are lower, construction is faster and with a good concept they can be operated very effectively, so it’s no surprise that they are more popular among hotel developers.
In terms of new hotel developments in the region, Budapest is only surpassed by Warsaw where currently there are 3200 rooms under construction. The activity of the Polish and Hungarian capitals are especially impressive considering the fact that there are only 1200 new rooms being built in Prague, Belgrade, Bucharest, Zagreb and Bratislava combined. That is only 60 percent of the Budapest pipeline.
Older hotels should take this opportunity to renovate their buildings and refresh their offers, otherwise they won’t be able to compete with newer developments,” commented András Dallos, Director of Valuation & Advisory Services at Colliers International.