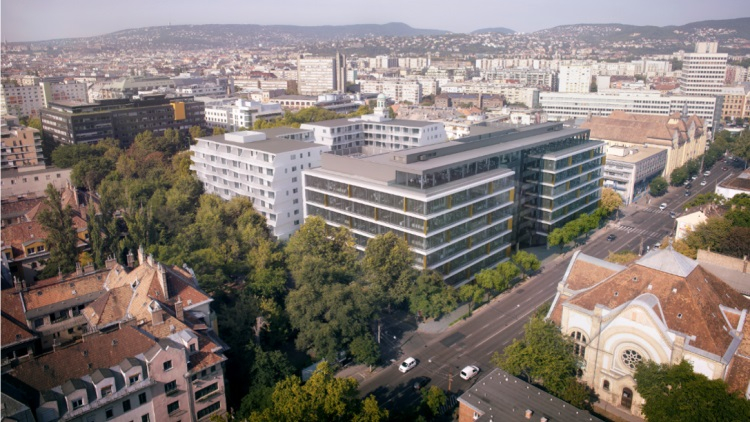 Codic International, a Brussels-based developer, announced that construction has commenced on the office component of Green Court, their latest mixed-use development to be realized in partnership with the Hungarian Pesti Házak and the Austrian Venta Group. The project is located in Budapest on the Váci office corridor. The project incorporates Green Court Office, a 21,000 sqm GLA premium office development, and Green Court Residence, comprising two residential buildings with 275 apartments. The apartments will be occupied by the end of this year, and the office project is scheduled to be handed over in Q4 2020. Colliers International and Jones Lang LaSalle have been appointed co-exclusive leasing agents for the office development.

Codic is known in Budapest as the developer of the 17,000 sqm GLA Krisztina Palace, completed in 2010. More recently, Codic has developed several prime buildings in its core business markets, including the Gateway and Passport Offices at Brussel National Airport, the high-end Royal-Hamilius development in the city centre of Luxemburg, and the iconic Resonance and Network buildings in Paris.
Green Court will also include a 3,300 sqm interior garden and 1,700 sqm GLA of common service retail. The developer plans to receive a BREEAM Excellent certification.
“Among the several new developments Codic plans to undertake in Budapest in the foreseeable future, Green Court is the first to start and will complete the development complex of which the residential part has already met a tremendous commercial success. The offices are designed, finished and equipped to the usual high standards of the Codic Group and located in the new focus of the inner Váci Corridor, nestled in a “green lung” neighbourhood on Dózsa György út,” explained Christophe Boving, Head of Development at CODIC, in charge of Hungary.