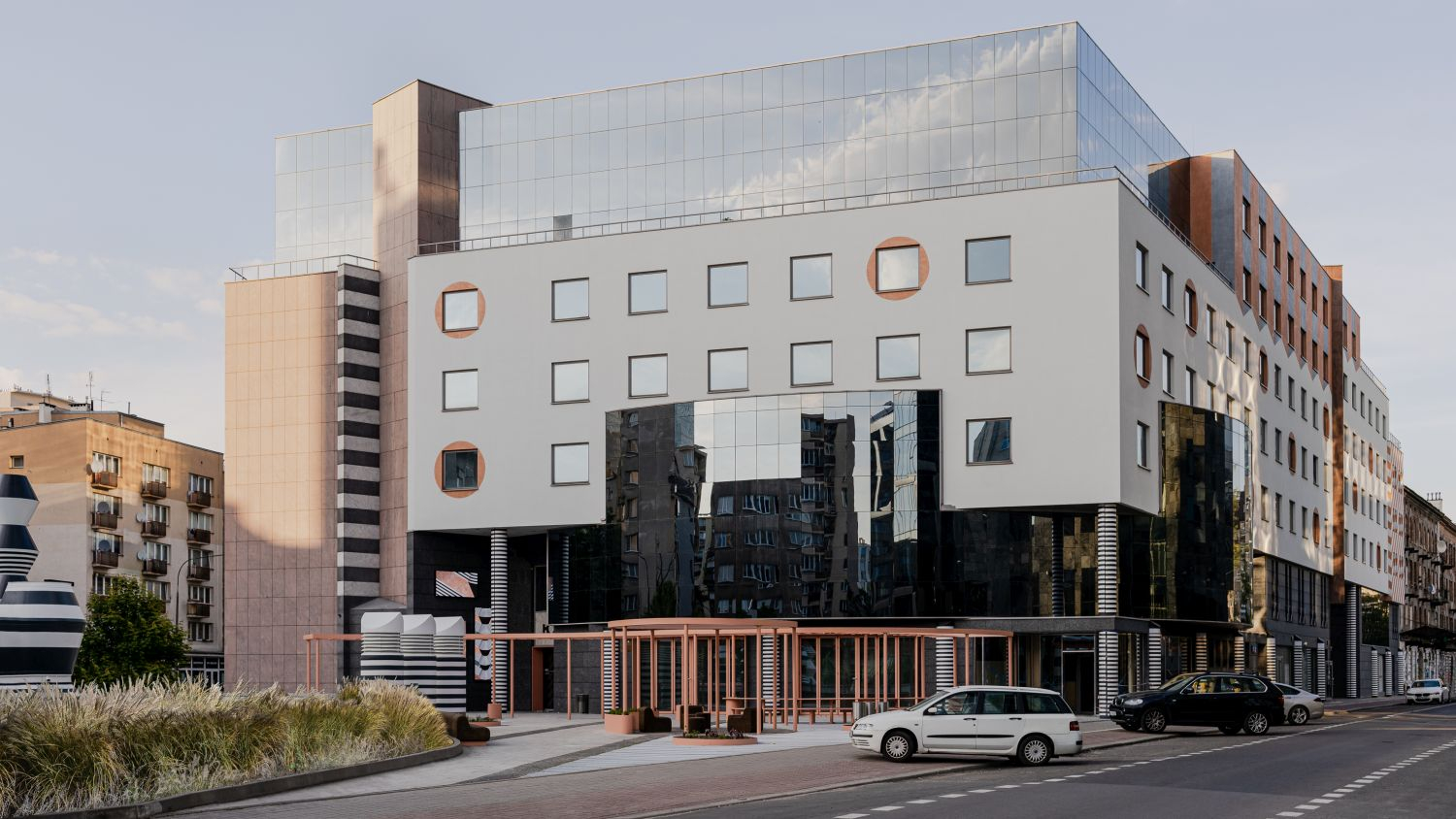 HOP, a post-modern office building from the 1990s has undergone a thorough upgrade thanks to Syrena Real Estate. The process lasted nearly a year and reached completion with the opening of the Lupo Pasta Fresca restaurant by  Warsaw restaurateur Justyna Kosmala, owner of Charlotte and the Wozownia Bar. The office building has also recently obtained the BREEAM in Use certificate at the EXCELLENT level and Barrier-Free Facility awarded by the Integration Foundation. The HOP is the first of two development projects in Syrena RE’s portfolio with PineBridge Benson Elliott to undergo such transformation. Work on the other project, the Marynarska Business Park, is underway.


The HOP (formerly Aktyn) is a typical post-modern building from 1996. It was one of the first modern office buildings in Warsaw. It housed the headquarters of the Bank Przemysłowo-Handlowy. Over the years, like other investments from that period, it ceased to meet the contemporary requirements of the rapidly changing commercial real estate market and the expectations of tenants. Syrena Real Estate decided to give a second life to the building and integrate it into the existing urban fabric while preserving its post-modern character and style, appreciated worldwide and increasingly popular also in Poland. The Reesco Group was responsible for the redevelopment.

“The transformation of office buildings dating back to the last decade of the 20th century is a trend which unveils the potential of postmodern buildings and redefines contemporary office reality. We want to be at the forefront of that trend, and the HOP is our first flagship development. Before the modernisation, it was an unremarkable building from the era of economic transition, and it virtually disappeared. It could have been demolished like many other buildings of its kind. However, we decided to bring it back to life by highlighting its post-modern architecture and adapting it to the requirements of the post-pandemic work systems,” said Witold Zatoński, Managing Partner at Syrena Real Estate. “The HOP is changing the perception of buildings dating back to the period of economic transition in Poland, and it sets a new direction and defines a new way of thinking about friendly office space. We are working on other transformations of properties in Warsaw to adapt them to the modern expectations of tenants, including sustainable development. The essence of our proprietary concept is to make office buildings into connectors where tenants’ space mingles with common areas and the outside world, and to respect the existing architectural substance by reinterpreting and improving it. At this time, the work is most advanced at the Marynarska Business Park office complex.”

The new HOP building has been designed by Anna Łoskiewicz of Łoskiewicz Studio, previously known locally and internationally for her award-winning Beza Projekt studio. The HOP’s entire space has been designed to be open and flexible and to offer personalised solutions for many working styles. The square in front of the 600 sq.m. office building has also been given a new look. New greenery and flower meadow have been planted here, and rest and relaxation spots are arranged in copper construction. The office building also includes one  apartment located on the top floor of the building. It will be used as an art space arranged in cooperation with cultural institutions.

The HOP is one of few facilities in Warsaw with as many as 10 fast-charging bays for electric and hybrid vehicles, and the upgrade has made it possible to adapt the entire car park to car charging. The modernization of the building is confirmed by the recently obtained BREEAM in Use certificates at the EXCELLENT level and Barrier-Free Facility awarded by the Integration Foundation, which means that it meets the requirements of architectural accessibility and is adapted to the needs of people with various types of disabilities. The office building is currently in the process of being certified by WELL, and WELL Health and Safety Rating.

The HOP office building offers a total of more than 14,000 sqm of leasable space, including 13,000 sqm of offices and workspaces. The commercialisation status of the building is 93%. The HOP houses the offices of 4Life Direct Polska, BNP Paribas, CMT Construction Management Team, the Institute of Environmental Protection – National Research Institute (PIB), and others. The building has six above-ground storeys and one underground storey with a car park with 94 parking spaces.