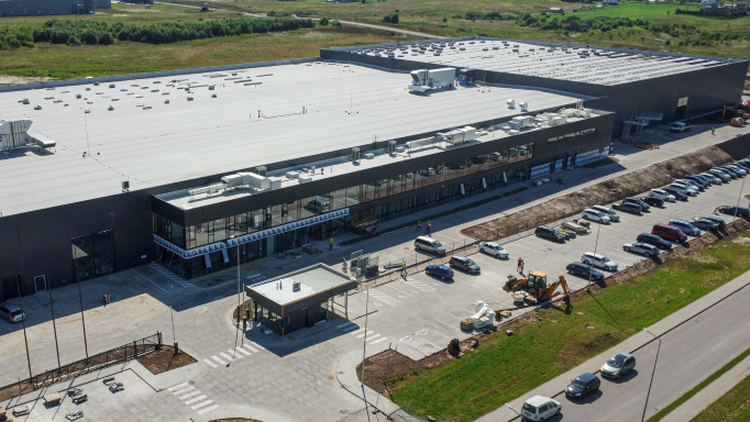 Poland, which is the fifth largest warehousing market in the EU, has the opportunity to take over a significant share of the investment and production and logistics processes moving from Asia.


Thirty percent of new warehouses in Europe are being built in Poland, and the country ranks third in terms of demand for space, after the UK and Germany. The investment market has slowed down somewhat in recent months, but the prospects for the sector in Poland are very promising.

Changes in the global economy and concern over the conflict in Ukraine have not curbed the record high interest in leasing warehouse space in Poland so far. Demand in the warehouse market is at a record high. However, the number of new investments has declined.

"In the first half of this year alone, nearly 4 million sqm of space were made available to tenants, about 12 per cent more than in the previous year. The record high absorptive capacity of the Polish market, which exceeded 7 million sqm of space in 2021, places Poland on the European podium in terms of demand", informs Agata Karolina Lasota, managing director of LBC Invest. However, she admits that the real impact of geopolitical factors on the sector in Poland is not yet felt. "The high rental volume recorded in the first six months of the year is a consequence of investment processes initiated last year. However, signs of the economic slowdown are beginning to be visible in the warehouse market as well. Although there is a warehouse deficit in Poland, as there is only 3 per cent of vacant space, there has been a decline in the number of new investments in recent months", she explains.

Agata Karolina Lasota points out that the decline in investment activity in the domestic logistics market may prove to be temporary, as the scenario of more extensive relocation of production from China and other Asian countries to Poland is quite real. She admits that the subsequent disruption of global supply chains from China, and the increase in the cost of container transport from Asia is effectively motivating companies to shorten the length of deliveries. An influx of customers from Western Europe who want to relocate some of their production and logistics operations to Poland is also likely.

"In addition to attractive logistics facilities, Poland offers investors a large domestic market, lower labour costs compared to Western European countries, and well-educated people willing to work. We are receiving inquiries from companies from Russia and China, which are analyzing the possibility of moving production to Poland. Ukrainian business owners are also reaching out to us. Companies want to secure the continuity of work as much as possible and are taking measures that can guarantee their undisturbed operation in the future. They are planning to increase warehouse stocks, secure facilities for production and aim to increase efficiency and optimize logistics costs", says Agata Karolina Lasota.

In the second quarter of this year alone, the total warehouse space in Poland increased by 2.2 million sqm. Wrocław, Upper Silesia and the central Poland area increased their warehouse potential the most this year. The warehouse sector consists of about 26.5 million sqm of modern space in total. This gives us the fifth largest warehousing market in the European Union.

Poland is the second fastest growing market in Europe

By the middle of the year, almost 4.5 million sqm of warehouse and industrial space was under construction. In terms of growth, the Polish market is second in Europe. By mid-2022, there was 30 per cent more space under construction than at the end of 2021, but there was a nearly 10 per cent drop in output from spring to summer. On the other hand, if we look at the average of the last few quarters, the decline is more pronounced. The amount of space under construction in West Pomerania, Lower Silesia and the central part of the country declined in particular.

"Already during the summer, a decline in the number of speculative warehouse projects being developed in Poland was evident. Global economic turbulence and the conflict in Ukraine are creating uncertainty among investors. This makes it difficult for them to realistically estimate future construction costs. However, major players are still looking for land for investment, despite persistently high land prices. The building up of land banks indicates the desire of developers to return to intense investment activity. Companies expect the market to continue to grow rapidly. They are preparing further developments, but the start of investment construction requires securing space in advance with contracts", the representative of LBC Invest admits.

The decline in the number of new investments in Poland's warehouse sector is unrelated to demand. Interest in renting is still at a record high. In the second quarter of this year, demand for warehouses reached historic highs. The slowdown in the market is mainly related to difficulties in project implementation and rising costs of new investments.

Increased costs of project construction and property maintenance have affected warehouse rental prices this year, which so far in Poland have remained very low compared to other European markets. The highest increases were recorded in the Cracow and Tricity provinces, as well as in the Warsaw area. According to LBC Invest, since the beginning of the year, rents have risen from around 10 per cent to as much as 25 per cent, depending on the location.

:Due to the low availability of vacant space and the limitation of new supply, further increases in rental rates can be expected throughout Poland, which already began to rise at the end of last year and the beginning of this year. The Polish market is no exception, the increase in the cost of renting warehouse space can be seen throughout Europe", admits Agata Karolina Lasota.

Higher rental prices are certainly a motivating factor for investors due to the increased profitability of investments. Investment activity, on the other hand, may be dampened by high prices for attractive land and twice as high costs associated with financing projects by banks. ESG requirements make warehouse facilities environmentally friendly, energy efficient and comfortable to use, but the cost of implementing such projects is also correspondingly higher.