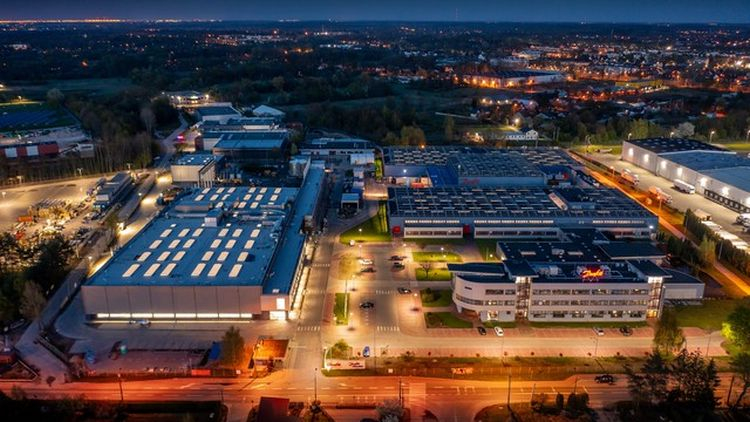 Panattoni has completed a production and business centre for Danfoss Poland. The 13,000 sqm complex of buildings together with its accompanying facilities was completed a year after the launch of construction work. Dekpol was the general contractor.


A year after the launch of construction work, Panattoni has completed the development of an office, warehouse and production facility with an area of over 13,000 sqm for Danfoss Poland – a Danish producer of energy-efficient components and technologies for refrigeration, air conditioning and heating units as well as for the drive and mobile machine industries. The factory is to produce commercial and industrial cooling components. It also allowed for the regular relocation of 45 production lines and resources from Danfoss’s factory in Denmark.

The production facilities in the completed complex take up 10,000 sqm. The office and social facilities take up a further 2,300 sqm and 1,300 sqm is taken up by a technical building.  In the final stage, the developer also delivered over 1,500 sqm of warehouse space.  An R&D centre was also built as part of the development. The centre developed by Panattoni has also been equipped with advanced automation systems and robots to guarantee the highest quality of products.

“We faced a wide range of challenges during the development, such as the short construction time, having to develop the first stage during the winter, and constructing the plant next to an already existing factory without disrupting its operations”, says Marek Foryński, BTS Managing Director at Panattoni and he adds: “Moreover, we had to facilitate the relocation of production lines from Denmark. Our experience proved invaluable with such a scale of the challenge.”

Michał Chodecki, BTS Development Director at Panattoni points out: “We took care that despite the pandemic, the work of the construction team continued and also ensured that those responsible for the design documentation could work effectively. The production hall was built on a car park, which required a change in the local zoning plans. Despite all of the challenges, the assembly of the first production line was begun after seven months.”

This is confirmed by Adam Jędrzejczak, President of Danfoss Poland. “Every stage of the construction was successfully completed due to the highly effective collaboration of Danfoss, Panattoni and the general contractor Dekpol. The lightning speed to construct the factory with the construction of a warehouse for finished products and components at the same time was crucial to limiting the impact of the factory relocation on our clients.”

Both the new production and office building and the warehousing sections have been equipped with a wide range of energy-saving solutions. Danfoss Poland uses heat recovery systems on water chillers and air compressors, which is used to heat water as well as the production hall and the offices. Heat pumps have also been used and electric boilers, which are used to make up any shortfall during peak hours of usage as well as a ventilation system with heat recuperation. An advanced BMS system will also ensure limited energy usage. Panattoni has also reinforced the roof so that solar panels can be installed.