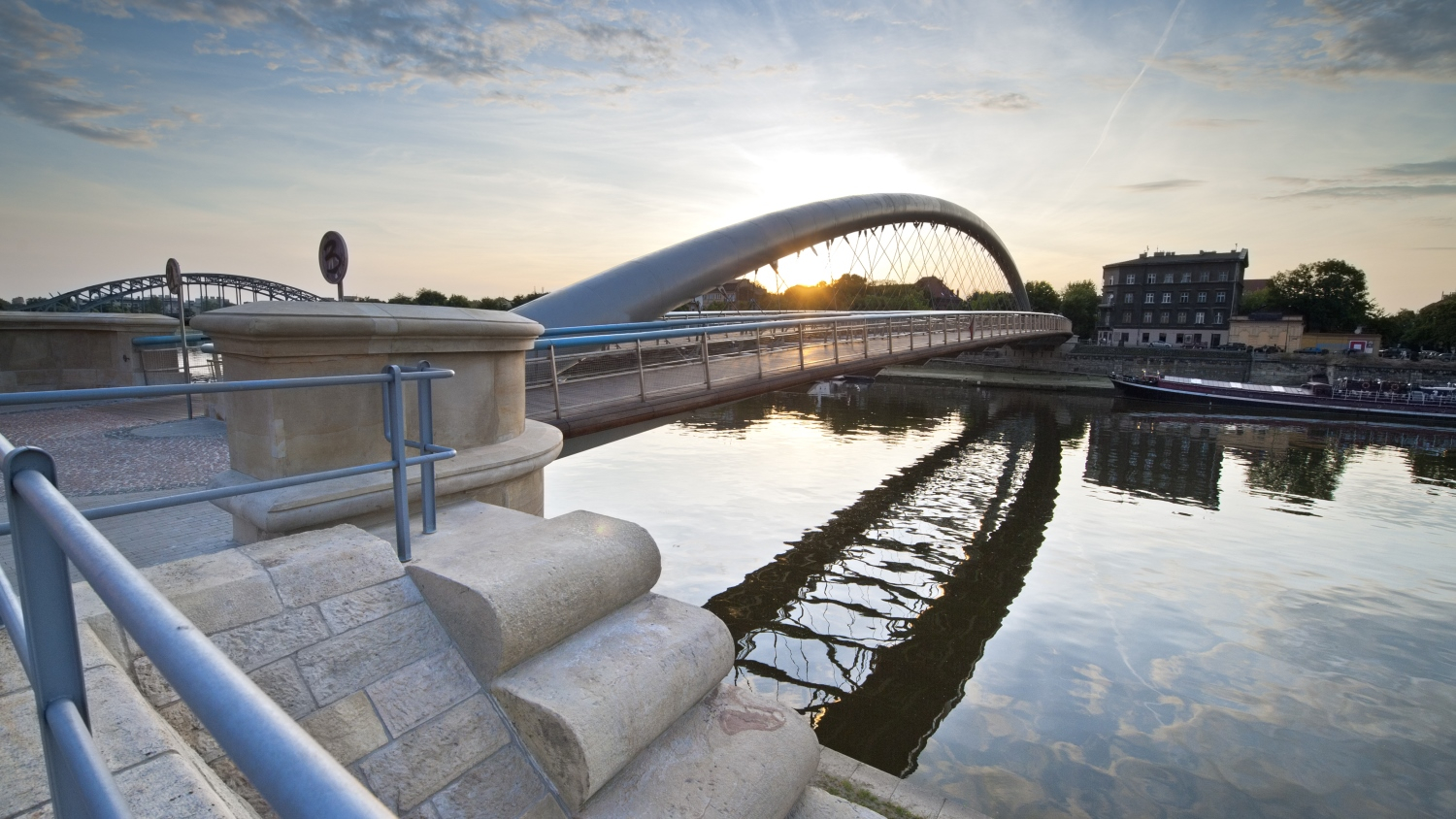 Developers operating on the six largest Polish cities sold a total of 17,600 units in the fourth quarter of 2019, which is 9% more than in the previous quarter. This increased annual sales to 65,400 units, which is nearly 1% better than last year. It was also the second-best result in the history of the primary housing market in Poland, according to JLL’s report.


The last quarter was the best quarter of last year in terms of both the number of transactions and the volume of new supply. Sales results were better than those at the end of September in almost all of the six cities – the largest residential markets in Poland. Sales in Warsaw increased the most, by as much as 22% q/q, which resulted in 6,800 units being sold in Q4 and 24,300 throughout the year. In annual terms, however, Poznań is the undisputed growth leader. Although q/q sales dropped by 10% there, the result at the end of the year was 30% better than in 2018. The volume of transactions on this market reached 6,400 – a level that had not ever been recorded there. Łódź also reached the podium of best achievements with 4,800 units sold, which is 3% better than last year (and record-breaking for this market), as did Wrocław where 10,700 units were sold (+ 2% y/y).

At the other extreme were Kraków and the Tri-City. Kraków, with its annual sales of 10,900 units still remains the second-largest market in Poland, but this is only 200 units more than were sold in Wrocław. Sales significantly dropped there for the second year in a row, this time by as much as 12% y/y. Not as dramatic but also significant was the decline in the Tri-City, where "only" 8 200 units were sold, which is 4% less y/y and 2000 (20%) less than in the record year of 2017.

“The level of sales recorded throughout the year – better than previously assumed – may seem surprising, but only if we do not look at the number of launches. Up to the third quarter, the slow decline in the number of units being launched was accompanied by quite good sales, but close to the number of launches. The abrupt increase in supply in the last quarter of the year met with a positive response from demand despite constantly rising prices. Everything, therefore, indicates that it is not prices that inhibited sales, but not enough choices for buyers to meet their expectations. This is also confirmed by record numbers in Poznań and Łódź, where a clear increase in supply helped achieve sales records”, comments Katarzyna Kuniewicz, Head of Residential Research at JLL. 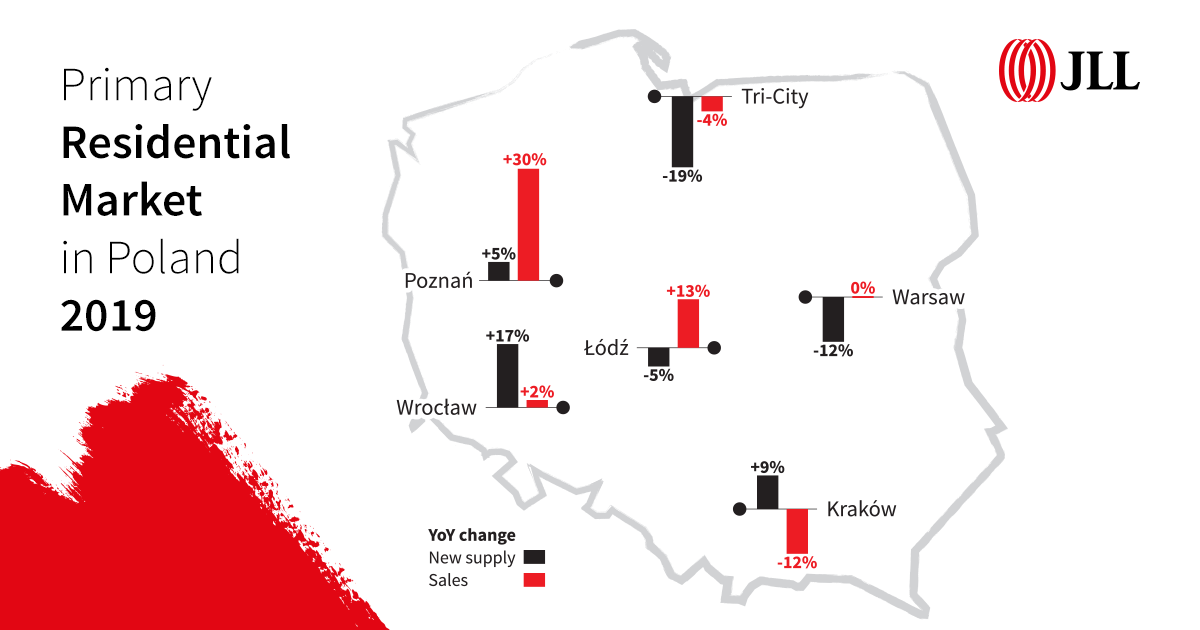 Despite a clear rebound in the last quarter, when 17,600 units were launched for sale in six markets, which is 21% more q/q, developers were hardly able to catch up on sales. Over the entire year, new supply amounted to 64,000 units and was 3% lower than in 2018 and 2% lower than sales for the whole year.

The biggest progress in supplying the offer was made by Wrocław developers, who launched 12,200 units for sale within 12 months and improved last year’s result by 17%. Developers in Kraków closed out the year with a clearly better result, as much as 9% higher, but due to a large supply backlog in previous years, the offer of units available for sale is still significantly lower than the annual level of sales. This is undoubtedly one of the reasons why sales numbers dropped there. Supply in the Tri-City slowed down the most. At the end of the year, half as many units were launched for sale as a quarter earlier (-46%) and 19% less than in the whole year.

“While problems with obtaining land and permits seem understandable in Kraków, the mystery is the lack of new investments in the offer of Tri-City developers, especially in Gdańsk, where there are a lot of areas with local plans. Perhaps Tri-City developers are hoping that by limiting the offer they will accelerate the purchasing decisions of customers who are increasingly less willing to accept prices in the most expensive projects”, says Katarzyna Kuniewicz.

Compared to numbers from a year ago, all four markets: Warsaw, Wrocław, Tri-City and Łódź, recorded increases in the range of 9-12%. Against this background, the situation in Poznań looks exceptionally good, where a 2% increase y/y is clearly lower than inflation and suggests the market is approaching equilibrium.

Many analysts feared that rising prices would slow down demand, but apparently this rule does not apply to the primary housing market in Poland.

“This is perhaps due to a combination of the continued strong economic performance of the country, accompanied by an increase in wages and numerous social transfers resulting in increased savings for some Poles and a strong belief amongst homebuyers that interest rates remain low, including interest rates on loans. There are also many people who believe that investing in real estate can protect accumulated funds against inflationary depreciation, and at the same time secure an additional source of income for the retirement period when pension payments are expected to be low. This means that rational calculations are accompanied by an emotional factor. Unmet demand remains high, while the industry is unable to provide enough product. In a word - prices are rising and will continue to rise – because they can”, sums up Katarzyna Kuniewicz.