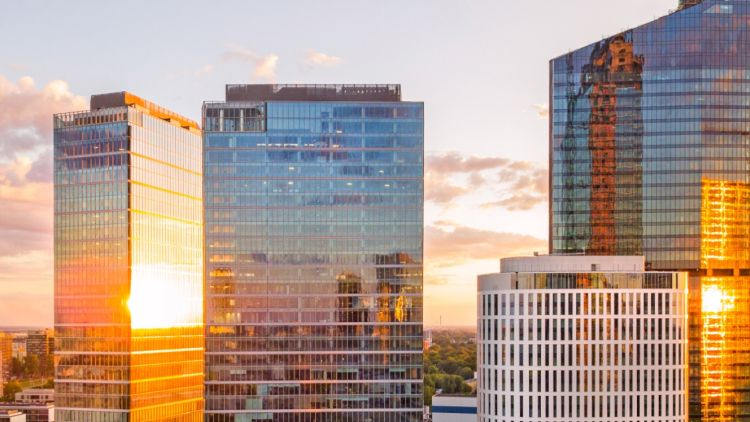 The Polish office market has more than 12.6 million sqm of modern space at the end of Q2 2022. Traditionally, Warsaw remains the leader in total stock, with eight major regional markets led by Krakow and Wroclaw not slowing down. An example is Tricity, which joined the ranks of office millionaires in the second quarter of this year. Optimism from rising demand is emerging from the market picture. AXI IMMO presents a data summary for the first half of 2022 on the Polish office market.


At the end of June 2022, Poland's total stock of A-class office space stood at more than 12.6 million sqm. Developer activity in the second quarter of this year totaled 103,900 sqm, reflected in completing 12 office buildings. Counting projects delivered to the Polish office market from January to June 2022, 34 developments were provided, with a total area of 440,800 sqm. Among the most significant office buildings completed in the period under review were Forest Tower (51,500 sqm, HB Reavis, Warsaw), KTW II (39,900 sqm, TDJ Estate, Katowice), and Midpoint71 (36,200 sqm, Echo Investment, Wrocław).

New supply in the office market in the second quarter of 2022 slightly affected vacancy rates. The Polish market has about 1.71 million sqm of space available immediately. In Warsaw, at the end of June 2022, the vacancy rate indicated 11.9% (747,700 sqm), with a very noticeable shortage of vacant space in central zones. In regional office markets, on the other hand, 961,000 sqm remains available for immediate lease (15,2%). The highest recorded vacancy rate remains in Łódź (18.6%) and the lowest in Szczecin (4.9%).

"We are seeing high demand in Warsaw, resulting in declining vacancy rates in central zones. Tenants at this stage are not worried about covid. In the case of the next wave, procedures related to greater sanitary safety, such as the introduction of shift work or home office to a greater extent, will be included again. Another consequence of tenants calming down in the context of the pandemic is fewer decisions regarding space optimization. Among the industries that, from our perspective, are increasing their demand for modern office space are law firms, tax companies, the IT industry, and operators of serviced offices. The growth of the last group is particularly influenced by the increasing number of companies relocating their operations from the East, mainly from Ukraine. These tenants often look for smaller spaces for 4-5 people for about a year. Two factors will influence whether companies from the East will become an influential group of tenants choosing to lease traditional office space in the coming quarters. The first is the degree and time of adaptation to Poland's conditions and labor market. In contrast, the second is the further fate of military operations in Ukraine," says Jakub Potocki, Senior Consultant, Office Agency, AXI IMMO.

Among the largest transactions closed in the Warsaw office market by the end of June, this year were two pre-leases. In the first, PKO BP leased 34,500 sqm in the SKYSAWA complex, while in the second, a confidential tenant from the banking sector will occupy 30,000 sqm in the Forest Tower building. The podium closes with a Q2 2022 deal in which Samsung Electronic Polska (R&D) renewed its lease of nearly 21,000 sqm in the Warsaw Spire C building. In the regions, on the other hand, the most interesting transactions took place between April and June 2022. Capgemini signed a 13,800 sqm pre-leasing agreement in the Fabryczna Office Park B5 building, while Cisco Systems Poland decided to renegotiate and renew a 12,500 sqm lease in the Enterprise Park C complex. The regional podium for the first six months is completed by a new deal signed in the KTW II building, where PWC will occupy nearly 10,000 sqm.

“The key trends worth pointing out for the next few months are that rising demand and limited supply will undoubtedly be reflected in rising rents. Today, estimating how much property owners will raise starting rents for new tenants is difficult. At this stage, it is also more challenging to negotiate incentives in the form of more extended rent vacations or more significant participation in fit-out costs. Fit-out pricing is slowly stabilizing, influenced by greater normalization of prices and greater availability of materials. Initial fit-out rates for Shell&Core space in Warsaw's central zones remain at €900-1000/sqm, with the average time to complete a turnkey project from contract signing taking about 5 to 6 months,” predicts Bartosz Oleksak, Senior Consultant, Office Agency, AXI IMMO.

"In the context of medium- and long-term trends, rising service charges costs should also be pointed out. We expect that for less energy-efficient office buildings, they may start at PLN 30/sqm at the beginning of 2023," adds Jakub Potocki.