8 charts that show the potential impacts of COVID-19 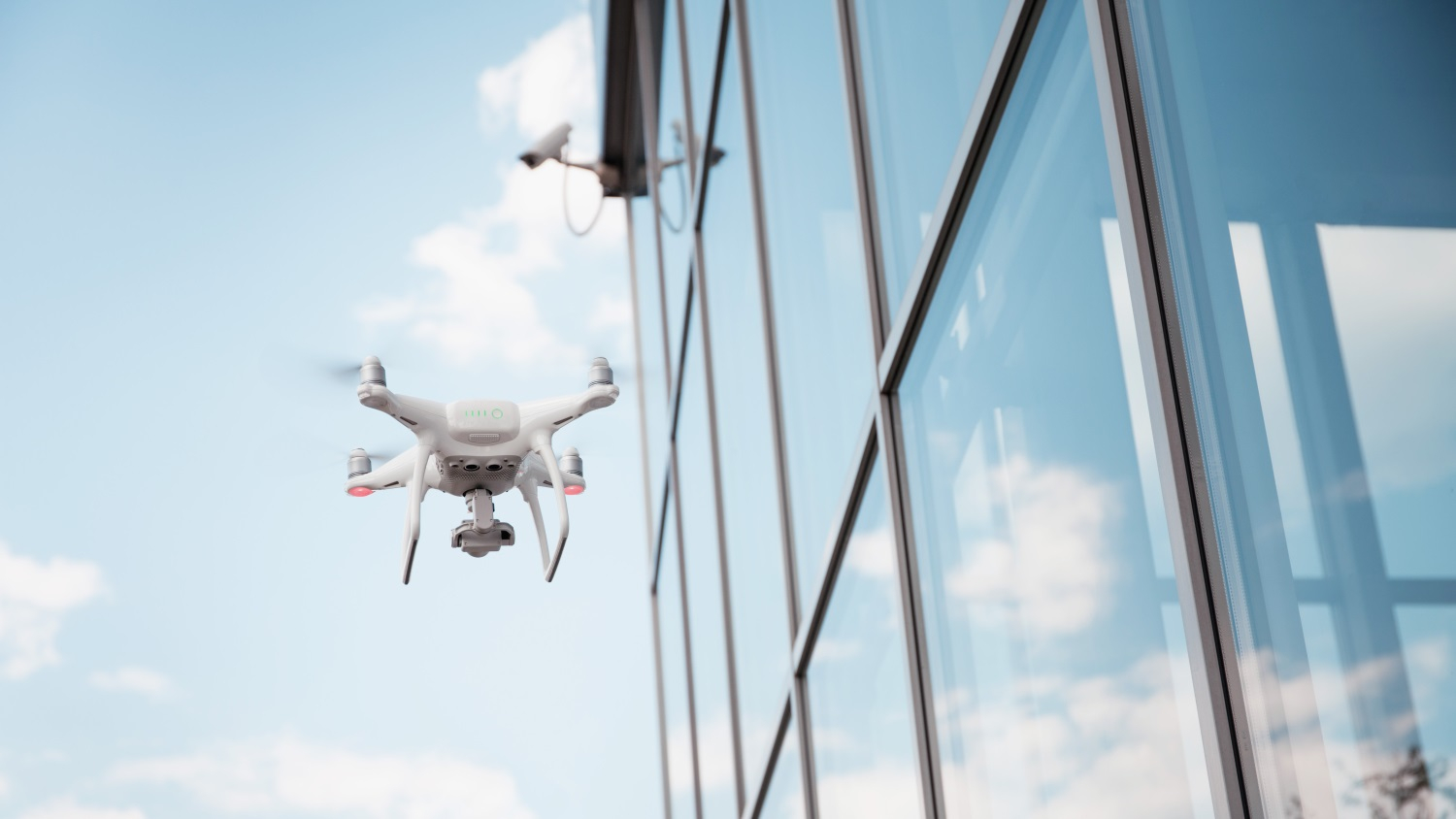 Getting a clearer picture of market participants’ expectations is more important than ever in these turbulent times. That’s why Property Forum and RICS launched a survey on the potential implications of the COVID-19 crisis on real estate markets in CEE. Nearly 100 people filled out our questionnaire. Here are the results.


The overwhelming majority is negatively affected by COVID-19 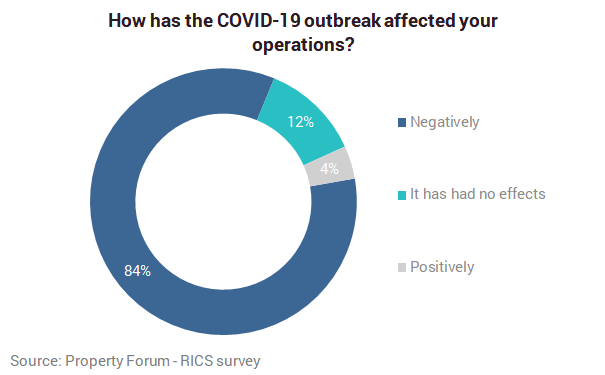 First, we asked respondents to share how the COVID-19 outbreak affected their operations. The overwhelming majority reported a negative effect, some view themselves as unaffected and 4% of respondents claim to have been positively impacted. 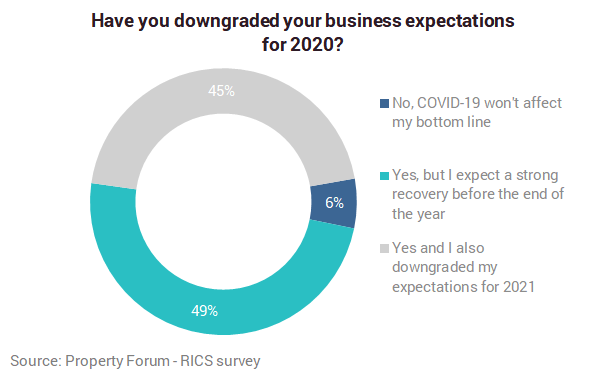 Only 6% of respondents believe that their bottom line won’t be affected by the coronavirus crisis. Roughly half of the remaining respondents expect a strong recovery before the end of the year while the other half expect negative financial consequences for next year.

Things probably won’t go back to normal this year 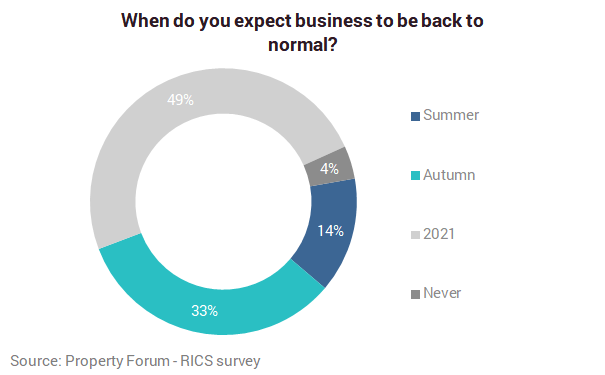 Logistics landlords and online grocers could benefit from the lockdowns 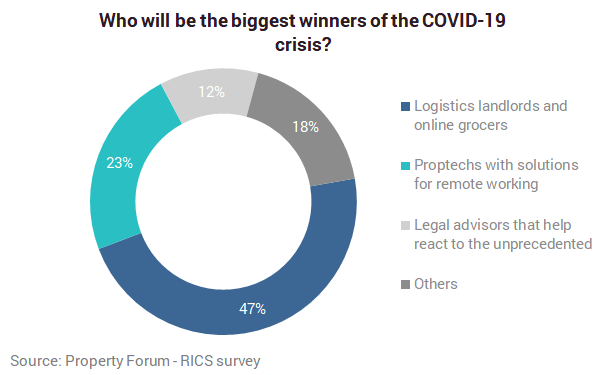 The COVID-19 crisis is clearly bringing new business opportunities for certain market players. Respondents expect logistics landlords and online grocers to benefit most from the lockdowns, followed by proptechs that offer solutions for remote working and legal advisors that can help clients react to the unprecedented. Additional responses included office developers that continue the construction of new projects, flexible space operators and opportunistic investors. Two respondents added that we shouldn’t be thinking about “winners” at this time.

Market players are split on the efficiency of remote working 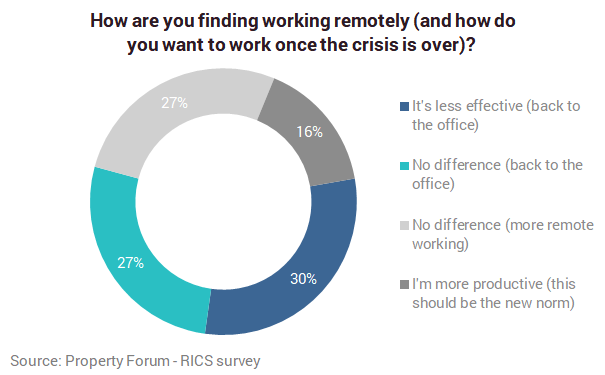 Every single of our respondents is currently working from home. The majority of them (57%) wants to go back to the office once the crisis is over, while the remaining (43%) would prefer more remote working opportunities. In terms of efficiency, 30% reported a decrease in efficiency while 16% found themselves more productive in the home office. For the majority (54%), working from home doesn’t seem different from working in the office.

This crisis will accelerate the adaptation of technology 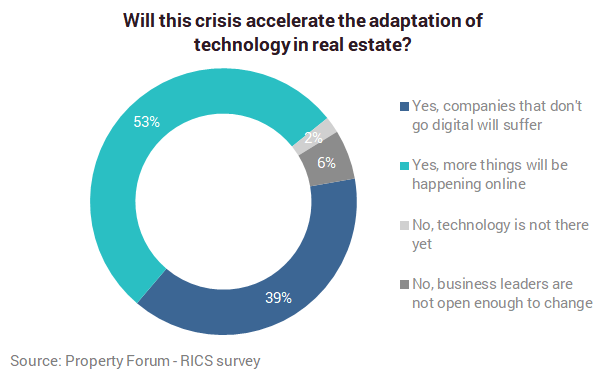 The overwhelming majority (92%) believes that the COVID-19 crisis will accelerate the adaptation of technology. The remaining 8% thinks that technology is not there yet or that business leaders are not open enough to change.

Mixed ideas on what governments should do 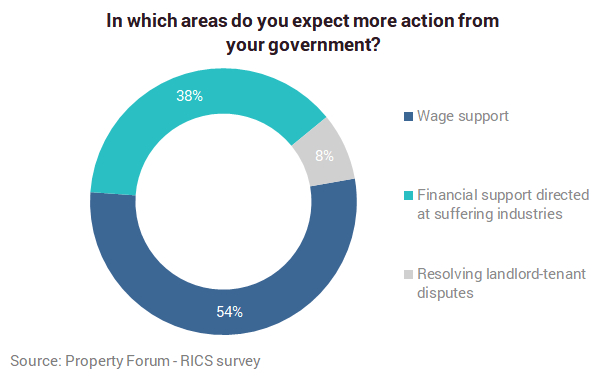 When asked in which areas governments should take more action, the majority of respondents ranked helping the unemployed and employers struggling to pay wages with the highest priority. Financial support directed at suffering industries is expected by one-third of respondents, while only 8% clicked on resolving landlord-tenant disputes. Other suggestions included investing in making every business process digital, providing solutions for banks to keep financing new projects and investing in healthcare. 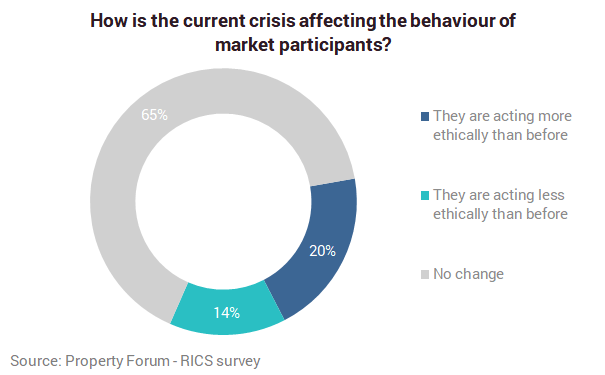 Uncertainty is a major issue

In an open-ended question, we asked respondents to share their main challenges in running their business. These were the responses:

Who filled out the survey?

Our 98 respondents come from a diverse background. In terms of location, almost two-thirds of them (64%) are based in one of the V4 countries – Hungary (20%), the Czech Republic (19%), Poland (17%) and Slovakia (7%), followed by Romania (9%) and the SEE region (14%). The remaining responses came from people based in other countries (mostly Austria). In terms of business activity, advisors (25%), investors (24%) and developers (20%) made up almost three-quarters of respondents, followed by bankers (14%) and other real estate professionals (18%).