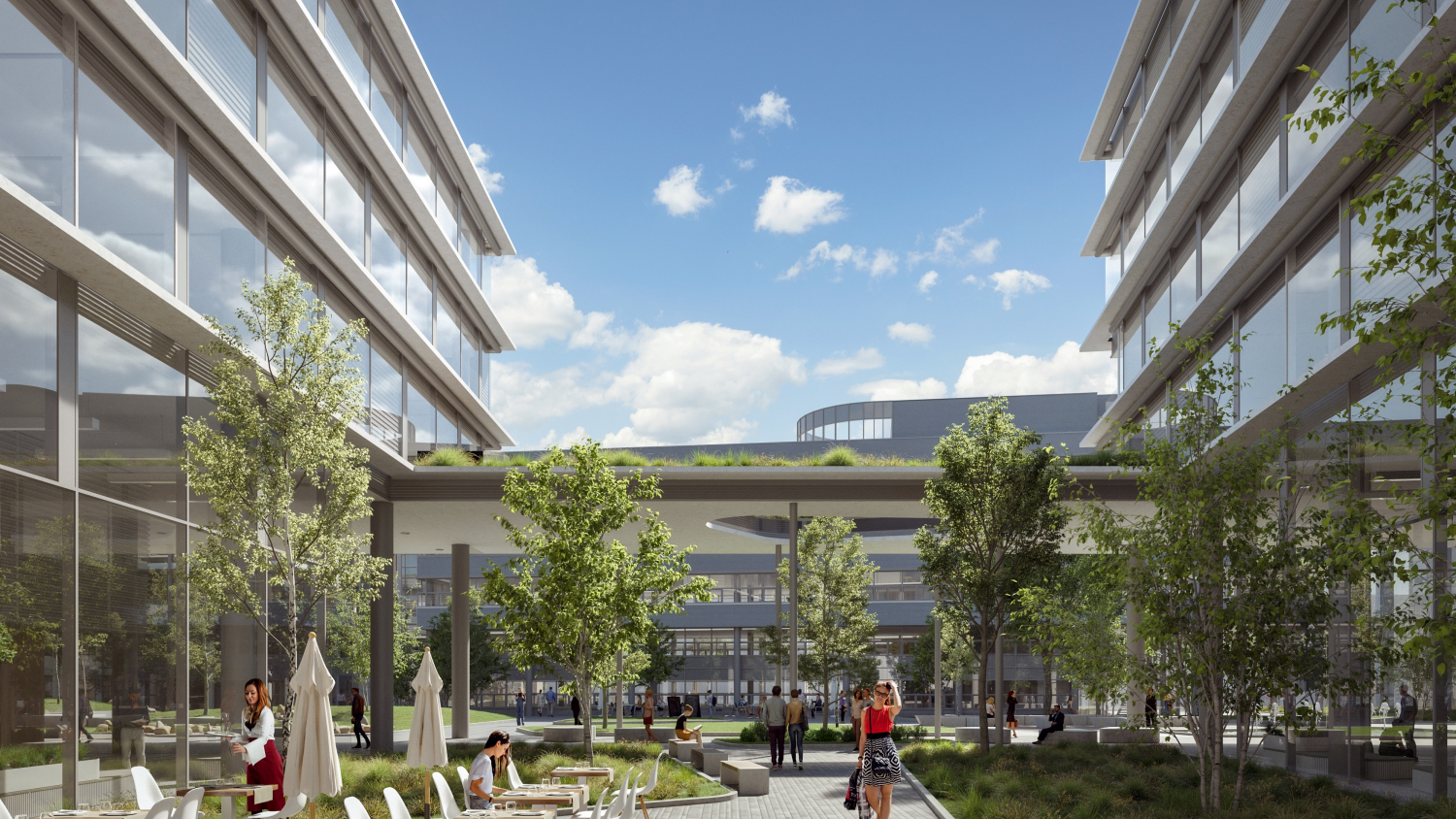 Wing, one of the largest real estate companies in Hungary, is launching a new office development. HOP Passage will be a part of Hungária Office Park (HOP), the complex at the former Siemens site on Hungária körút. With 32,000 sqm of Class A+ office space, this new building will meet environmental and accessibility rating criteria and will offer customisable offices looking out onto an inner garden to its tenants, with flexible terms. Preparatory work is to start in late 2021, and the new building is expected to be completed at the end of 2023.


Wing is launching its latest office development project, HOP Passage, in Hungária Office Park (HOP) in Hungária körút. The new building will be next to Gizella LOFT, the office building completed in late 2020 and now rented out to international tenants. This is a brand new development project in Hungária Office Park, a new 5-storey office building with 13,600 sqm of leasable office space and 376 parking spaces in a 3-level underground parking garage, which will meet the criteria of the BREEAM Excellence and Acces4you certification systems. The construction phase is scheduled to start in early 2022, and the development is expected to be completed by the end of 2023.

The new development is located at a former Siemens site, a 3 ha lot that has been operating under the name Hungária Office Park since the summer of 2021. Siemens acquired the lot that used to be a phone factory in 1990, and it became the company’s Hungarian headquarters. Wing purchased the property in 2018 and started the preparation of the development plans. As the first phase, Gizella LOFT, the tallest building on the site, was renovated and completed on time, tailored to the needs of the tenants, including TÜV Rheinland. The next phase of the Hungária Office Park project is the HOP Passage office building, a new office development on a vacant lot in Gizella utca, a lovely street in the Zugló area. After that, 3 new buildings will be added to the office park and the existing industrial heritage buildings will be reinvented and refurbished in 4 additional phases. Currently, there are leasable buildings with an area of nearly 40,000 sqm on the lot, and after the construction of new buildings and the environmentally friendly refurbishment of the existing ones, the office park will have a total of 65,000 sqm of leasable office space and approximately 1,000 parking spaces.

The new complex will have 2 receptions on the ground floor, which will allow for an arrangement with several tenants, potentially with an exclusive entrance for companies that need it. The building will have 5 levels of office space and 3 additional levels for parking. 2 lift cores will have a total of 6 passenger lifts, fire-fighting lifts and lifts with access to the parking levels. The underground parking garage will have 20 electric vehicle charging stations and changing rooms with showers for those riding a bike to work. The present ground-level parking places will be moved to a new underground parking garage, and the current parking lot will be converted into a community space with greenery and a pond.

“We decided to launch this large-scale, multi-phase project, the development of Hungária Office Park, as part of Wing’s long term development strategy, which aims to create a more liveable urban environment. The concept of reinvention and full renovation of this property, once a telephone factory then owned and used partly as an industrial site by Siemens in the 1990s, follows Wing’s corporate philosophy, as it repurposes an urban brownfield area with significant history to meet the current property market expectations and fills it with new ideas, functions and life. In the coming years, a new, eco-friendly complex with a total area of nearly 65,000 sqm will be created on a major property with development potential in Hungária körút: existing buildings will be redeveloped and renovated and new buildings will be constructed, the first phase being the completion of the HOP Passage office building,” said Noah Steinberg, Chairman and CEO of Wing.

Noah Steinberg is the chairman and chief executive officer of WING and the chairman of the supervisory board of Echo Investment. WING is the market leading office developer in Hungary and one of the largest privately held Hungarian real estate companies. WING is also the majority owner of Echo Investment, the leading Polish real estate developer. Noah Steinberg has worked in Hungary since 1990. As Chairman and CEO since 1999, Noah was responsible for establishing WING and oversees the company’s investment and development businesses, its office, retail, industrial, hotel and residential projects and its real estate services. He is also the Chairman of RICS in Hungary. Mr. Steinberg is a graduate of the Woodrow Wilson School of Public and International Affairs at Princeton University (BA), and the Diplomatic Academy of Vienna in Austria (MA). He speaks French, German, Spanish, Hungarian and English. More »

“We believe in urban locations and in the new Budapest office corridor emerging in Hungária körút, which can provide a competitive alternative to Váci út, which is almost full now. It was on the same ring road where we completed the Allianz headquarters in 2008, the Telekom headquarters and Skylight City, the renovated office building formerly known as Material Center, in 2018, and the Gizella LOFT complex at the end of 2020 – all projects were completed on time and were fully tailored to the needs of the future tenants.  Telekom’s HQ, a Wing development, is located at the Üllői út/Hungária körút junction, and right next to it Liberty Offices are currently under construction. Hungária Office Park is also in a special area, not only because of its proximity to Hungária körút and Thököly út, which boast outstanding transportation infrastructure, but also its location in the people-oriented, atmospheric Zugló district, making it a particularly appealing site”, said Norbert Schőmer, Wing’s deputy CEO responsible for office development.