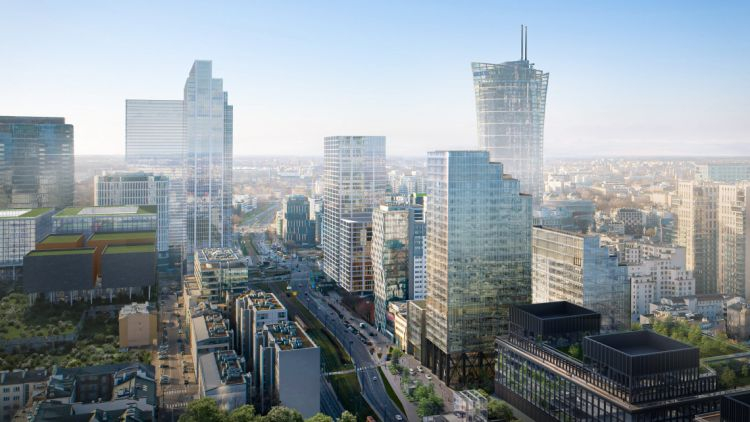 Office Warsaw faces major challenges: deteriorating macroeconomic indicators, rising construction and utility costs, and upward pressure on rents and service charges. In addition, there are delays resulting from broken supply chains, the spectre of a supply gap and a strong reshuffling in the demand structure. On the other hand, the capital city market reports a quarterly record in lease agreements signed and attracts an IT giant that buys one of the newest office-mixed use complexes; all this is according to the summary of the first quarter in the Warsaw office market prepared by BNP Paribas Real Estate Poland experts.


Warsaw's total office stock at the end of the first quarter approached 6.24 million sqm, of which over 93,000 sqm of modern space was delivered for use between January and March 2022. The largest completed project was the Forest office complex. The 120-metre-high tower built by HB Reavis houses more than 51,500 sqm of offices, most of which have already been leased during the construction phase.

The authors of the report stress that despite many challenges, the capital's office market is slowly returning to its pre-pandemic activity. In the first quarter, demand for new offices continued its upward trend, resulting in a record total volume of signed contracts, which exceeded 270,000 sqm. In terms of leasing, the first quarter belonged decisively to companies from the financial sector. The largest newly signed contract turned out to be a lease of around 30,000 sqm signed by a banking institution in the office campus, close to Arkadia shopping centre. The headquarters of all ING Capital Group companies will once again be Plac Unii. In the complex so far occupied by ING Bank, the Group has leased almost 23,500 sqm of space. In addition to offices, the bank intends to set up a modern training and conference centre on the site, with part of it being used as an Innovation Lab. PKO Bank Polski is also changing its headquarters. They will now occupy the entire Skysawa building at Świętokrzyska street. Under a long-term lease agreement, the PHN developer will hand over the entire building to the bank in Q4 2022.

The big investment event of the first quarter was Google's acquisition of The Warsaw HUB complex. The IT giant spent over PLN 3 billion on Ghelamco's flagship project. This is an important and positive signal for the office sector in the context of the lower volumes seen in the previous two years, which were the result of the pandemic and the vacating offices almost overnight.

A report prepared by BNP Paribas Real Estate shows that the structure of demand in the first quarter was dominated by new contracts. They accounted for more than half of the contracts signed. Experts estimate that this is one of the spectres of an upcoming supply gap as tenants try to take advantage of the available stock and secure it for the future. In the structure of demand, around 27%accounted for lease renewals and 13% accounted for expansions, the rest referred to new leases.

The gap is coming fast

The observed increase in tenants' interest in offices, the unfreezing of negotiations and the return of employees to offices, with less active developers in the background, inflation, rising construction costs, prolonged periods of finishing the spaces due to broken supply chains and the outflow of Ukrainian workers from the Polish labour market - this is a mixture, which in 2023 and 2024 will result in a supply gap in Warsaw, an increase in the attractiveness of existing office buildings and the growing popularity of various forms of flexible offices.

"In the coming quarters, the supply gap will be one of the main factors shaping the structure of leasing in Warsaw. Tenants will increasingly choose to negotiate in existing locations and extend their contracts. And these, in the shadow of the lack of new supply, high costs of construction, finishing and maintenance of buildings, will most willingly be concluded for a period from 3 to 5 years", emphasises Ewa Nicewicz, Consultant from the Office Space Leasing Department, BNP Paribas Real Estate.

"Revived demand and shortages in the supply of new space will translate into a marked decline in the vacant office rate. The stock to be considered will be older buildings, the owners of which will either decide to renovate and modernise their office function, or change their function (e.g. to Private Rented Sector, which is likely to accelerate its development as a result of increased demand observed in the last weeks), or face the prospect of optimising rental rates, as a large proportion of them are not so technologically advanced as to effectively reduce maintenance costs", adds Klaudia Okoń, Consultant from Business Intelligence HUB.

Contract renegotiations, optimisations and lower rents in older buildings are expected to allow tenants to compensate for higher service charges.

The capital's offices favour the development of serviced office operators and coworking spaces. Despite the return of employees to the office, two years of the pandemic and, in addition, an uncertain future dictated by the war in Ukraine and the economic situation, are sufficient arguments to treat flexibility, including office flexibility, as an important element of long-term business strategies. In the first quarter, Warsaw was enriched by a new operator of flexible office space, when BeIN Offices became a tenant of the Central Point office building. It will occupy 1,900 sqm on the eighth and ninth floors, where it will arrange offices for joint work.

If not flex office, maybe a sublease?

Currently, there is approximately 100,000 sqm of space available for sublease in Warsaw. This product, being a metaphor for market uncertainty, came to the fore in the outbreak of the 2020 pandemic. After the forced 'home office' period, many tenants switched to hybrid operation or extended already existing 'hot-desk' system. As a result, the tenant's office space was optimized, creating space for use by others, in return offering a finished space and a flexible lease period. A short lease term can be a motivator for companies that cannot afford a long-term commitment due to the need to restructure the company and the uncertain situation on the global market, or for entities that are going through a dynamic development and have not yet achieved their own critical mass. The first quarter of 2022 seems to confirm that sublease will remain an alternative for tenants yet for some time.