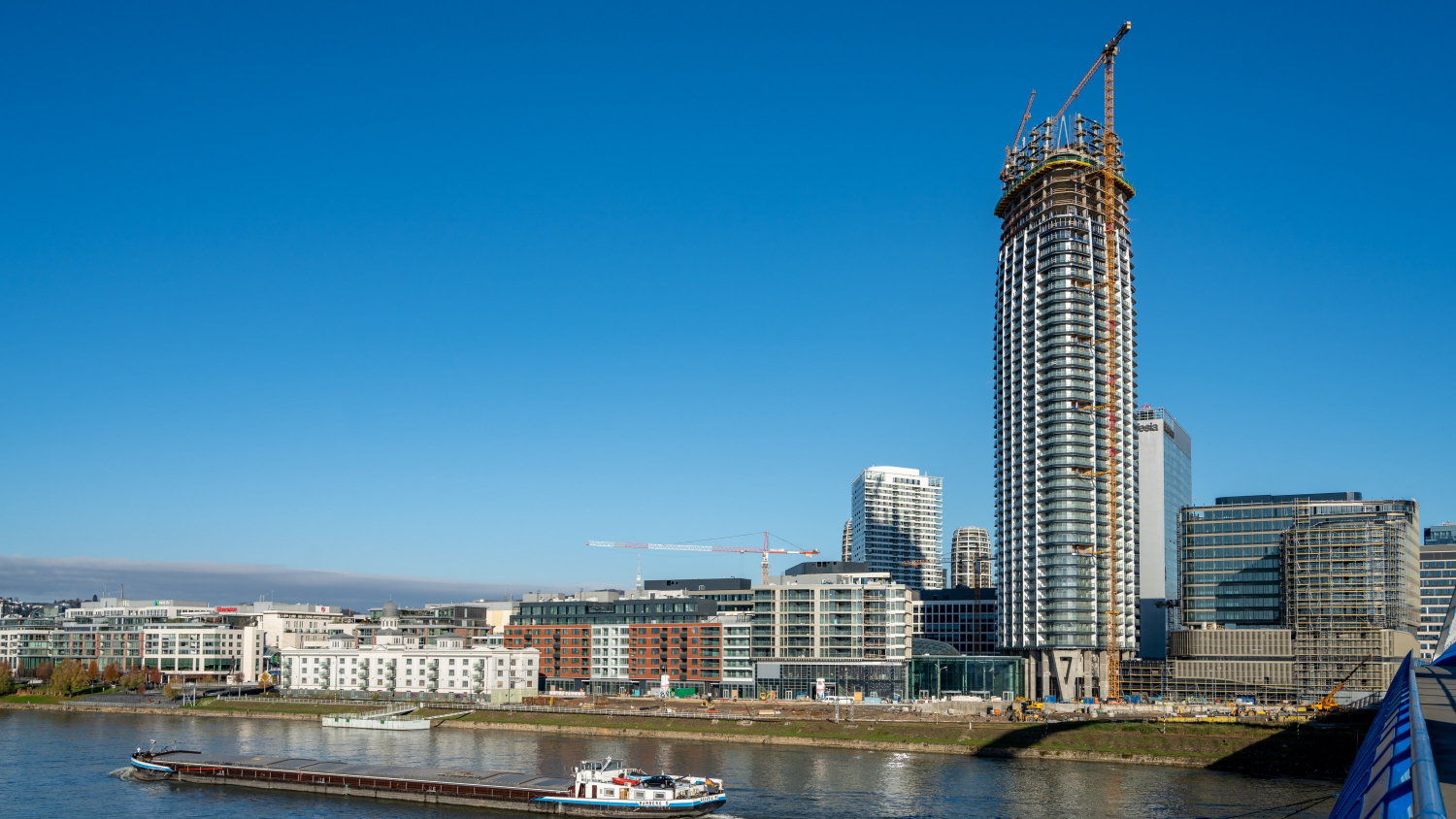 Most of the crown that constitutes the architectural and compositional peak of the Eurovea Tower residential development by JTRE has reached its final height of 168 metres. Only the crown, the façade on the upper five floors and the residential interiors remain to be completed in Slovakia’s tallest building. The entire project is planned to be finished next summer.


It took 24 months from ground level to the top. Once the underground section and base with 15-metre V-shaped supporting columns were completed, floors were added at an average rate of one every 11 days. The continuation of the Eurovea complex started at the end of 2019, with foundation work beginning in 2020.

In May 2020, the first of 14 cranes was erected. The main crane for the skyscraper rose as more floors were added, reaching a full height of 200.5 metres by this October. The building's structure is framed by a massive three-metre foundation slab, which took three days and nights to concrete in September 2020; and a one-metre thick slab for the top 45th residential floor which was concreted this October. Above it, a technical 46th floor was constructed.

The first Slovak skyscraper includes four hundred residences. Residents will have an entrance lobby with a reception desk and direct access to the shopping centre. Almost 90% of apartments have been sold, with the remaining released for sale as construction is completed.

In addition to the skyscraper, the Eurovea 2 project includes an enlarged Eurovea shopping centre, Riverside residences, Pribinova X, Pribinova Y office buildings, and underground garages. The Danube district Eurovea City includes the extension of the waterfront promenade, construction of Pribinova Boulevard with preparation for a tram link, and other new public spaces, playgrounds and sports areas. The skyscraper’s southern square that overlooks the Danube will feature Octahedral Body - a new visual work by Viktor Frešo that was selected by an expert jury from 25 designs submitted by Czech and Slovak artists. Eurovea city is becoming the heart of Bratislava’s contemporary centre.

"Building a skyscraper is a very dynamic process. While we’re laying parquet floors on the first residential floors, we’re still pouring concrete many levels up. With our high-rise buildings, it’s a learning curve, every time adds to our knowledge," said Project Manager Ľuboš Kaštan at the topping-out ceremony.

"I would like to thank all internal and external co-workers for the momentous event of Slovakia’s first skyscraper reaching its final height. It was only thanks to their efforts and excellent coordination of all supplies and work that this feat has been achieved," added Pavel Pelikán, Executive Director of JTRE.

GFI architectural studio’s Radoslav Grečmal - who designed Eurovea 2 - recalled some of the negative reactions when the skyscraper’s design was first unveiled: "And now here we are. I hope that you all retain that perspective and view when you descend, and should you lose it...come back here."

Marek Ščury, Bratislava Area Director of Strabag Pozemné staviteľstvo s.r.o., the construction’s main contractor, spoke about the project’s specifics and highlights. He recalled the skyscraper's foundation slab being poured from a Friday morning until Sunday afternoon and how at 1 a.m. he’d emptied the local fast food joint of all its coffee. "I had an incredibly good feeling about how everything worked here, whilst also feeling that I was actually messing around with these guys. During the concreting, I experienced emotions like at the concert of my favourite band. Thanks for the opportunity to be part of this project, and I hope the investor has the courage to build even higher," he said.

"Every building, even the largest, comprises countless little things that need to be done in just the right order. I’m glad that we have succeeded so far, and reached the final height of the first Slovak skyscraper. There are only a million little things left to complete the project to a level rightly expected for this construction," added Kamil Baďo, Director of Gleeds Slovakia (responsible for construction management).