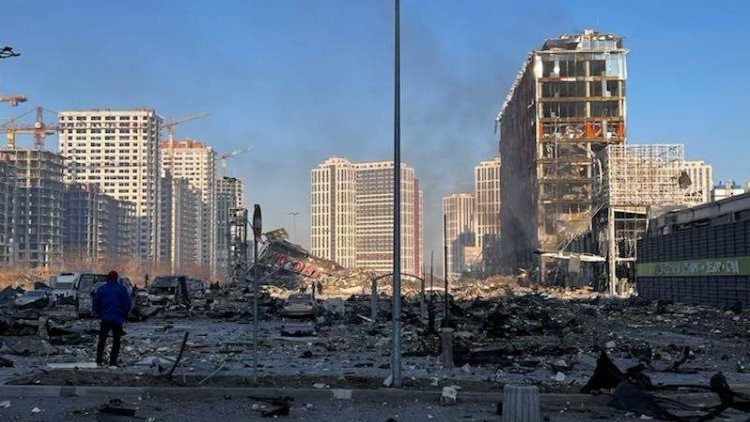 Unlike logistics and retail assets, office buildings received less damage from the war in Ukraine, but it is still impossible to calculate the exact number of losses or destroyed office space. Iryna Nastych summarised the situation in an article prepared by the Ukrainian Real Estate Club for Property Forum.


It is very difficult to estimate the number of business centres that were destroyed in the east and south of Ukraine, their scale remains unknown to date. Whereas in the capital, the following buildings were partly destroyed: BC LUWR (22 000 sqm), where because of an explosion, the facade of the building was damaged and BC Retroville (11 000 sqm), where because of shelling there was total damage to the building, according to CBRE Ukraine. (Editorial note: The site of the destroyed Retroville building is pictured in the cover image.)

The office market had not yet had time to recover from the Covid upheaval by the beginning of the war. According to Konstantin Oleinyk, Head of the Strategic Consulting Department at UTG, some staff continued to work remotely. “After the optimisation of occupied space, some office space became unclaimed. In business centres of Kyiv at the beginning of February 2022, the vacancy was 13.3%,” he adds.

The beginning of the first quarter was quite challenging for the office market, because the situation in Ukraine was tense and tenants began to look for safer places even before the open invasion. This was especially noticeable in the IT sector, some companies moved their employees with their families out of Ukraine back in January and early February, while some temporarily moved their offices to western Ukraine.

"Some tenants took care to relocate to safer western regions or other countries, even weeks before the full-scale invasion by Russia began. At the same time there were tenants who had hoped for the first weeks of aggression that Kyiv would remain a safe place and the war would end in the next days or weeks," says Anna Silvestrova, Head of Office Real Estate at CBRE Ukraine.

After the open invasion, business activity declined in all regions of the country."In regions where there was fighting or rocket and bomb strikes, business activity decreased significantly, curfews and traffic stops, and the danger of being on the streets led to the closure of most office buildings," comments Konstantin Oleinyk.

There were significant changes in the relatively safe regions. "In the first weeks of the war, some companies in western Ukraine stopped business and consequently stopped renting offices, but tenants from central and eastern Ukraine came to replace them. There was a trend of relocation of offices of large companies,” adds Yuriy Skolozdra, Head of DELTA Ukraine’s Lviv office.

As for the market of flexible offices and co-working spaces, on the one hand, there is a suspension of contractual obligations by international co-working operators in regions where military operations were directly involved, while, on the other hand, the co-working and full-service office market continues to develop in the west of the country, notes Anna Silvestrova. "For example, in March the opening of a new co-working hub from the founders of Futura Hub - Pop up coworking was announced and the co-working office of international operator Regus (1 400 sqm) in BC KIVSH, which was introduced in late 2021, is now almost fully occupied. Also, flexible workspace provider Spaces (2700 sqm) is planning to open an office in LvivTech.City innovation park in June 2022", says the expert.

As for vacancy, everything depends on the region. In Kyiv, we can observe a certain "densification" of the office market, but experts do not analyse the vacancy rate, as the overwhelming majority of lease contracts are not broken.

"In the western regions, the picture is different - the significant demand for office space with high-quality repairs in the city due to the relocation of businesses from other regions of Ukraine has caused almost zero vacancy in the market of Lviv", stress the experts of CBRE Ukraine.

At the moment, experts unanimously note the positive trends observed not only in the western regions but also in the capital. "After the de-occupation of the Kyiv region and the return of embassies of a large number of countries in the market, there has been a certain revival of rental activity. Companies are carefully beginning to consider ways of returning or resuming their activities in the capital, but today it is too early to state about the prevailing trend of returning business to the region,” the experts of CBRE Ukraine say.