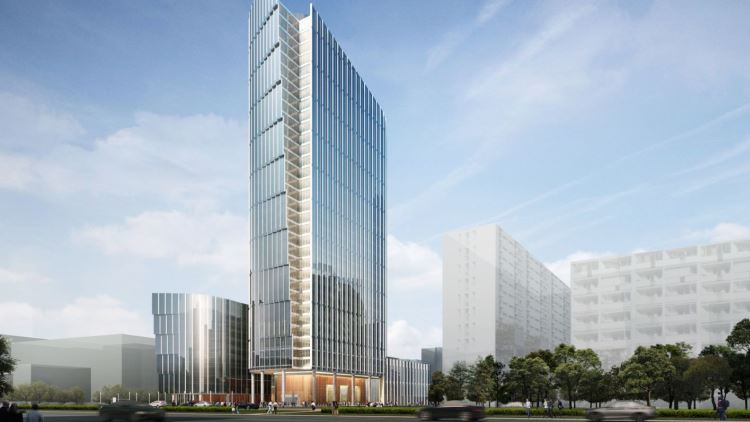 Golub GetHouse and Mennica Polska S.A. obtained financing for subsequent stages of the construction of Mennica Legacy Tower in Warsaw. More than €130 million of construction credit was granted by a consortium of three banks.

The investment at the intersection of Prosta and Żelazna Streets, with a total office space of 65,630 sqm., carried out by Golub GetHouse and the Mennica Polska S.A., has obtained a loan worth €131.5 million, which was granted by a consortium of three banks: mBank S.A. (also performing as a consortium agent), Santander Bank Polska S.A. and Bank Ochrony Środowiska S.A.
Cezary Jarząbek, Founder and CEO of Golub GetHouse, said: "The construction of Mennica Legacy Tower, commenced in November 2016, is progressing according to plan. The conclusion of a loan agreement with a consortium of three banks will allow us to finance further construction and finishing works. We are glad that the banks appreciate the project of the Mennica Legacy Tower and, just as we believe in its commercial success”.
The borrower was represented by Greenberg Traurig LLP in the field of legal and financial advisory, while the consortium of CMS Cameron McKenna banks Nabarro Olswang Pośniak i Sawicki sp.k. Gleeds-Polska Sp. z o.o. is a technical advisor to the banks.
In the Mennica Legacy Tower there are only 4 floors left to the end of the ceiling construction. The works will be completed by the end of this quarter. All construction works have already been completed in the Western Building of the complex and the lease area has been transferred to the exclusive tenant – WeWork – for arrangement works.
The 140-metre-high Tower with the neighbouring 43-metre-high Western Building will offer a total of 65,630 sqm of modern office space. The project was designed by the renowned Chicago-based architecture firm Goettsch Partners, which decided to work with the well-established design consultants Epstein.
The Mennica Legacy Tower will combine unique architecture, the latest technologies, functionality and top-quality. Both buildings will feature advanced technological systems increasing the continuity and reliability of the buildings’ systems as well as improving the security of tenants. The Mennica Legacy Tower will also feature the latest mobile technologies enabling tenants to communicate with the building using a smartphone and a mobile app.
The tenants of the Mennica Legacy Tower office space include law firms Noerr Biedecki sp.k. and Allen & Overy, as well as the world leader in coworking spaces, WeWork, the sole tenant of the Western Building. The unique offer of the complex will be enhanced by retail and service spaces, which will be developed, among others, by the MEET & EAT restaurant concept and Zdrofit fitness club.
The entire project will be completed in line with the demanding requirements of the BREAAM international environmental certificate with an “Outstanding” rating. The entire complex will be open in autumn 2019.