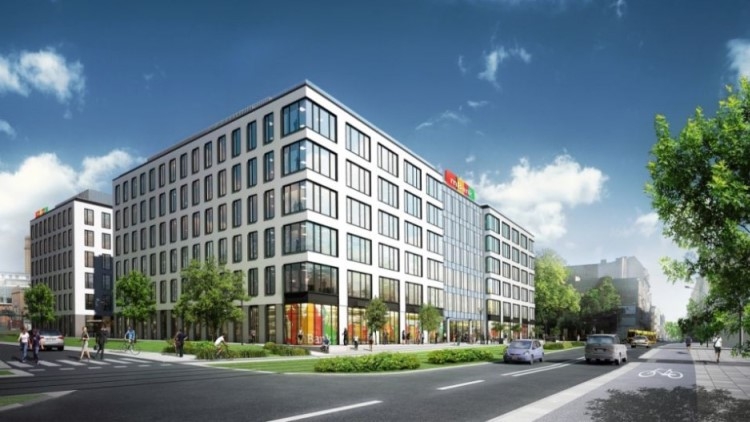 Ghelamco has finalised the sale of Przystanek mBank, a build-to-suit office complex in the New Center of Łódź. The transaction led by companies from the Ghelamco Group included a long-term investor LCN Capital Partners and mBank. The value of the transaction is approximately €60 million.

Companies from the Ghelamco Group signed a final sale agreement to sell shares of the company that owns the Przystanek mBank project to sale-leaseback and build-to-suit investment specialist, LCN Capital Partners, through their Luxembourg based long-term investment fund, LCN European Fund II SLP. The agreement is the finalisation of the preliminary agreement concluded in April 2017 between both companies, who worked together for the benefit of mBank. The facility is a 24,000 sqm modern office complex in a traditional setting in the heart of Łódź. The Ghelamco Group companies were advised by JLL in structuring and brokering the transaction. Legal advice was provided by the international law firm Greenberg Traurig.
“The sale of Przystanek mBank is one of the largest transactions on the Polish real estate market, which took place in 2017. Its value reflects the great potential of Łódź and the growing attractiveness of this city for investors. Outside of Warsaw, it is one of the most dynamically developing office markets in Poland. Currently, our company is preparing for the implementation of two big office projects in the center of Łódź,” says Jeroen van der Toolen, Managing Director CEE at Ghelamco.
“The sale of Przystanek mBank shows the continuous liquidity of the major office markets outside Warsaw and their attractiveness to investors. A modern property, located in the very heart of the city, as part of the New Center of Łódź, hedged with a long-term lease agreement, is a very attractive investment product,” adds Tomasz Puch, Head of Office and Industrial Investment at JLL.
Przystanek mBank is the first project by Ghelamco (in cooperation with Budomal) implemented in Łódź. The complex offers approx. 24,000 sqm of office space, fully occupied by mBank Group. Signed in December 2015 for a period of 12 years, the lease agreement is one of the largest agreements on the Polish office market in recent years. The investment was completed in the fourth quarter of 2017. mBank has already started the process of moving in to its new regional headquarters.
The office complex was delivered in the very centre of the city, at 74 Kilińskiego street, in the vicinity of the renovated EC1 complex and the new train station Łódź Fabryczna. In addition to the newly-built, six-floor office building, Przystanek mBank also includes a historical palace building with an annex, which was harmoniously integrated into the project. The investment also offers an underground parking lot with approx. 180 spaces and sophisticated infrastructure for cyclists with 140 spaces for bicycles as well as other amenities (locker rooms, showers, etc.).