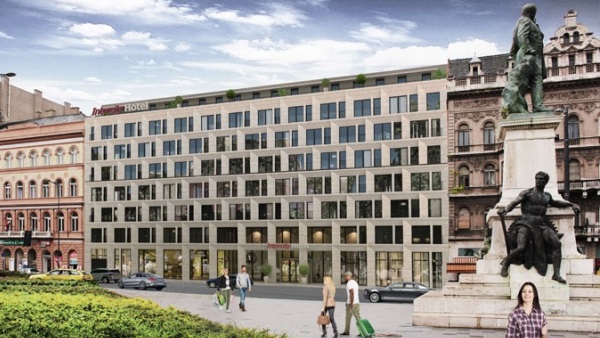 Deutsche Hospitality’s first hotel CEE hotel is set to open in by 2019. IntercityHotel Budapest will be located in a newly constructed building in forint of the City’s Eastern Railway Station (Keleti pályaudvar). It will have 300 rooms, a restaurant, a bar, a conference area and an underground car park with 200 spaces.

The building is owned by the Hamburg-based B&L Group which, as well as acting as contractual partner in this case, is also currently working with IntercityHotel GmbH to develop three new hotels in Germany. This is the first occasion on which B&L has joined forces with IntercityHotel GmbH to implement a project abroad.
The building will also feature 100 apartments with a gross floor area of 3600 sqm that do not belong to the hotel. IntercityHotel GmbH has a long term (for over 25 years) lease contract with the contractor for the hotel itself that will have a gross floor area of 13,500 sqm.

Deutsche Hospitality expects German travellers to make up a significant portion of the new hotel’s guests, that’s why they chose Keleti pályaudvar as a location since all train coming from Germany and Austria terminate there. The hotel targets leisure and business travellers as well with leisure travellers expected to make up the majority (60-65%) of guests, Claus-Dieter Jandel, Chief Development Officer at Deutsche Hospitality told Portfolio Property Forum. Hotel occupancy is expected to be around 80% with room rates being above €100.

IntercityHotels are usually located next to major railway stations and airports. Although the brand is mainly focused in Germany, it has been expanding abroad over the recent past. There are now locations in Austria, Netherlands, Oman and China. Further hotels will be added in Germany and at three more foreign sites during the coming years. Alongside Budapest, the locations that have been earmarked are Leiden (Netherlands) and Dubai (United Arab Emirates).
Deutsche Hospitality brings together three separate hotel brands – Steigenberger Hotels and Resorts, Jaz in the City und IntercityHotel. The Deutsche Hospitality brand encompasses a total of 125 hotels, 27 of which are at the development stage. The portfolio includes 56 Steigenberger Hotels and Resorts and 41 IntercityHotels. The first Jaz Hotel opened in Amsterdam in November 2015.