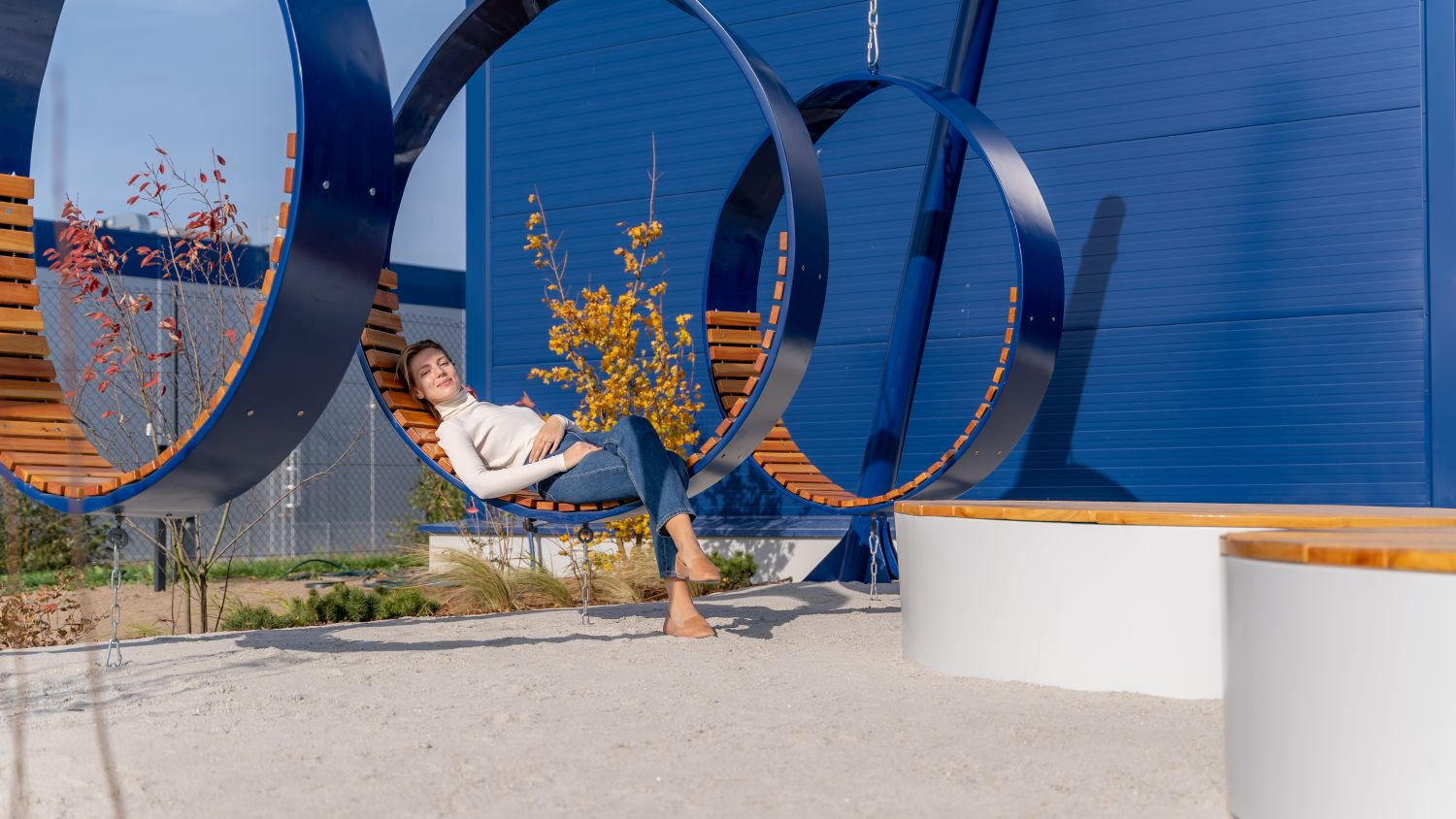 Panattoni is supporting the upcycling of the machinery used to generate green energy. In 15 of the developer’s locations, environmentally-friendly outdoor furniture can be found, made from former wind turbines. In 2023, similar furniture is to appear in another 100 locations.


Dozens of deck chairs, benches and swings made out of wind turbine blades have been placed in the green and recreational areas around Panattoni’s centres, including those in Kraków, Kalisz, Wrocław, Wałbrzych, Małe Żerniki, Pruszków and Nadarzyn. This results from partnering with Anmet, which for the last 20 years has specialised in recycling waste and since 2015 has been recycling wind turbine blades.

“In this situation, the recycling of wind turbines has become essential for the further development of wind and energy and renewables in general and without renewable energy sources we are not going to achieve the goals of the EU taxonomy. By pursuing our ‘Go Earthwise with Panattoni’ concept we act in a holistic manner by moving to renewable energy sources but also by pursuing the concept of a circular economy,” states Emilia Dębowska, the Sustainability Director at Panattoni.

The wind turbine blades that Anmet turns into outdoor furniture can be used for 25 years. A single wind turbine, over its lifetime, will save 36,500 tons of CO2 emissions that otherwise would have been produced by a coal-fired power station.

In 2022 Panattoni was provided with around 315,000 MWh of electricity certified as renewably sourced allowing for CO2 emissions to be cut by 160 000 tons. One year earlier this figure was 250,000 MWh, equating to a saving of over 125,000 tons of CO2. The developer is now also turning to the use of heat pumps including in the Danfoss factory in Grodzisk Mazowiecki as well as solar panelling. The company has constructed reinforced roofs for solar panels in places such as Świebodzin, where a 200,000 sqm centre was equipped with almost 4,000 panels. In Żerniki as well as in Pietrzykowice the developer has also placed ground-level installations. Panattoni is also consistent in its support for a cyclical economy, for which the re-use of raw materials is crucial. Over 90% of materials on the developer’s construction sites are recycled.

Wind energy is fundamental to the switch to zero emissions for both Europe and the world. In Poland, the generating capacity of wind farm installations at the beginning of 2022 came to just 7.2 GW but future investment including in wind farms in the Baltic should further develop this energy source. A similar situation exists in the rest of the EU where on average 18 GW is to be installed every year up to 2026.  In 2021, 17 GW of new wind-power generating capacity was installed in Europe. This figure remains too low to be on track to achieve the EU’s climate and energy goals by 2030.

According to the ‘Wind turbine blade waste in 2050’ report by the University of Cambridge, wind turbines could be producing as much as 43 mln tons of waste around the world, of which Europe would account for a quarter. In just the next five years, almost 15,000 wind turbine blades could be decommissioned.

“Responsible management after usage will be one of the greatest challenges in the coming decades. Panattoni is demonstrating that the industrial real estate sector can also play a role in this positive trend,” adds Emilia Dębowska.