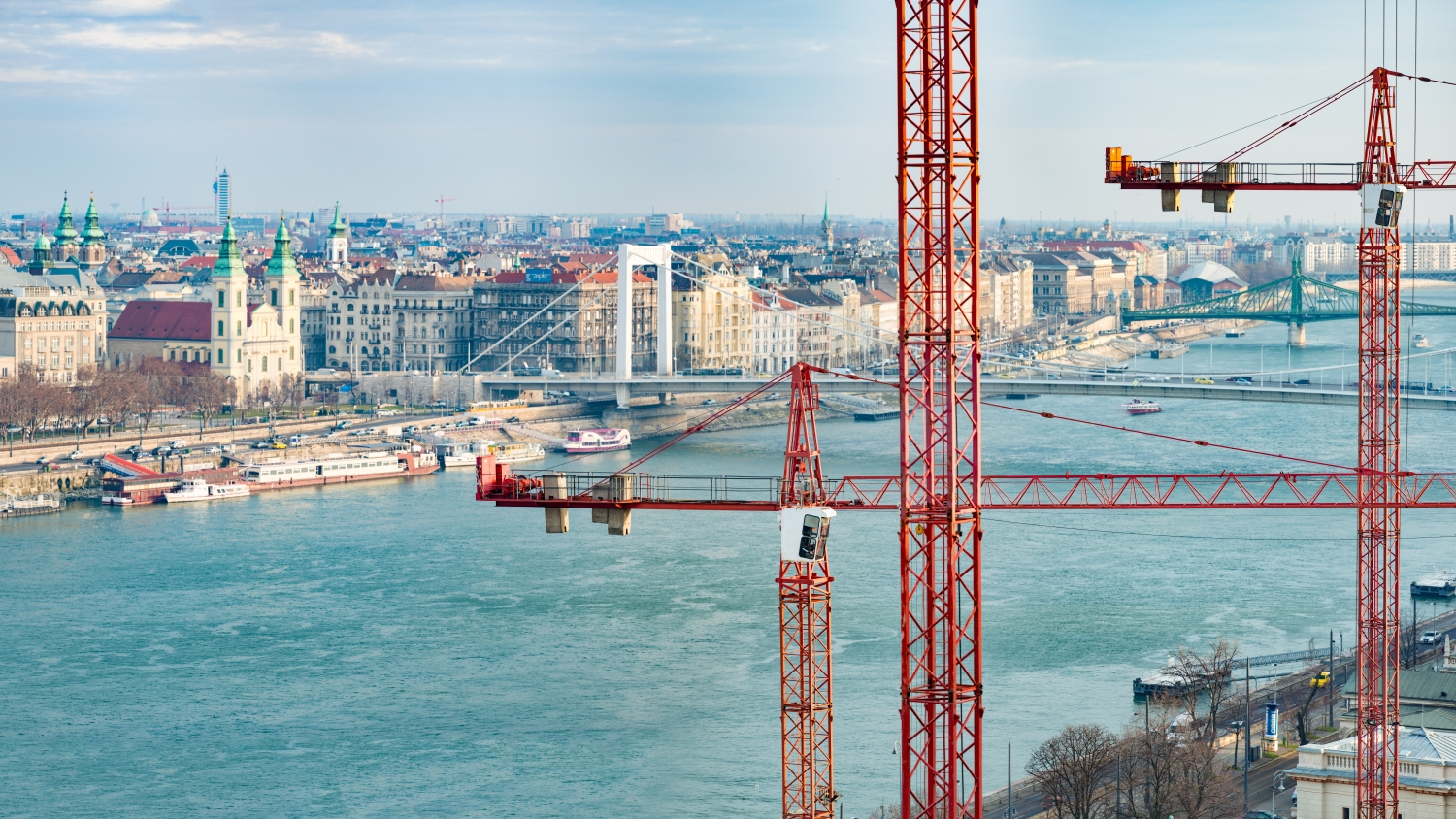 Due to the pandemic, the construction industry in Hungary last year registered a significant fall and the last quarter couldn’t save the year either. The latest EBI Construction Activity Report has found that Q4 2020, similarly to the low-value Q4 2019, saw the start of construction works at a value of HUF 442 billion. Owing to the massive drop in mid-2020, 15% less construction work started than in 2019 and 30% less than in 2018. In 2020 the Activity Start Indicator of the EBI Construction Activity Report accounted for less than HUF 2000 billion and the decline affected all major subsectors.


The EBI Construction Activity Report examines the situation of the domestic construction industry on a quarterly basis, including the volume of newly started construction works, and the value of projects completed in each quarter in aggregate and by sector as well. It is prepared by Buildecon, Eltinga (creation of indicators and development of algorithms for aggregation) and iBuild (project research and project database). 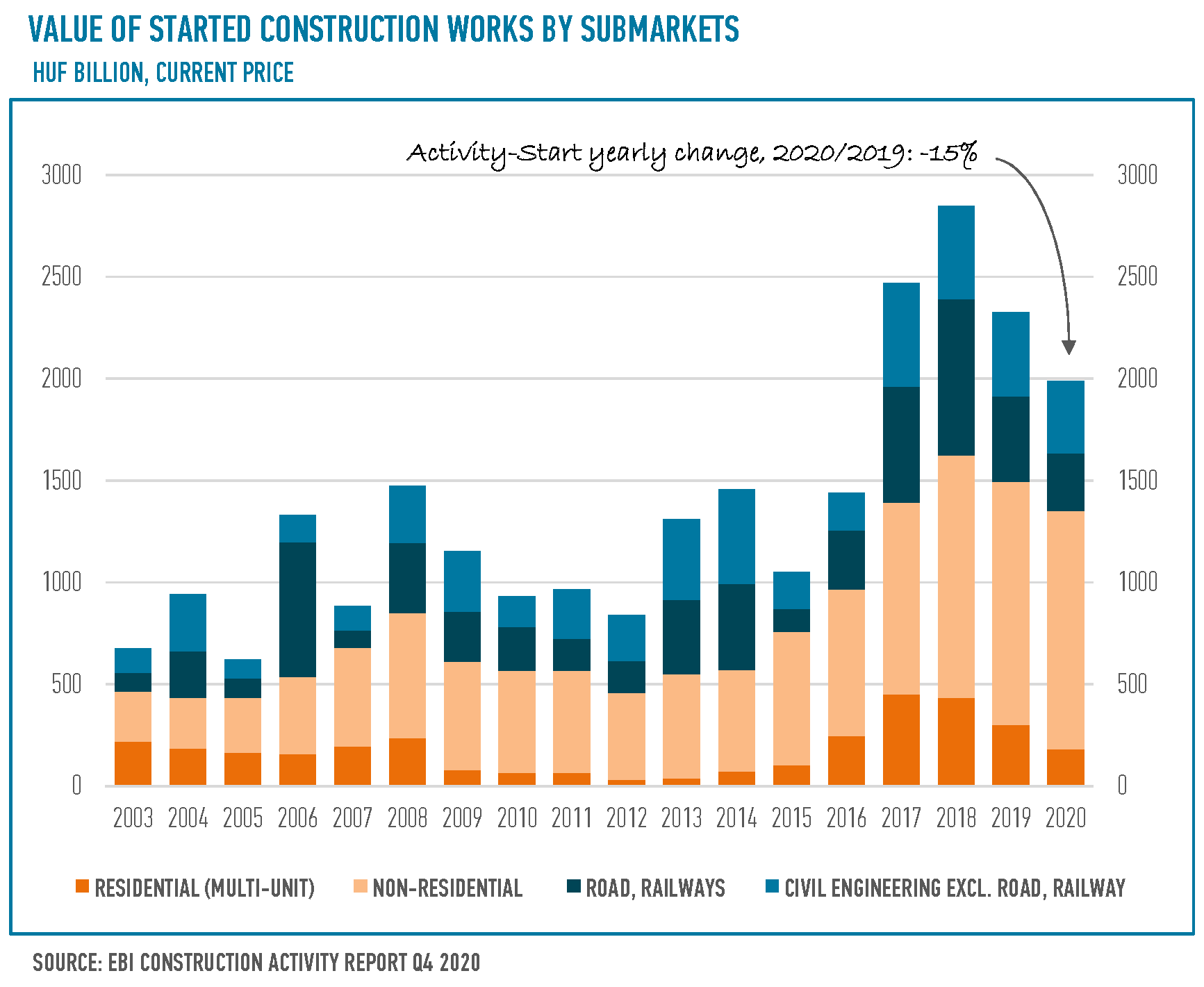 Building construction registering yet another decline in activity

The main reason for the decline is a great drop in the number of multi-unit buildings. The total value of such projects entering construction phase in Q1 2020 even exceeded the numbers of Q1 2019. Yet, the shrinkage in the following 9 months was so large that the value of projects started in 2020 fell to the level of 2015-2016 in the segment, showing a decline of almost 40% over 2019. In the case of non-residential buildings, there was hardly any discrepancy in Activity Start between 2020 and 2019.

The biggest projects launched in Q4 2020 include the construction of Hotel Hévíz in Hévíz, the restoration and development of the Citadel in Budapest, and the construction of several rural industrial and factory buildings such as Nestlé Purina pet food factory in Bük or the ZalaZone military plant in Zalaegerszeg.

Q4 2020 no saviour of civil engineering

2020 was a mixed year for civil engineering. In Q1 it managed to maintain the Activity Start value of the same period of the previous year, and Q4 was 70% higher than the end of 2019. In contrast, the middle of the year was well below the 2019 figures with the value of construction works started in Q2-Q3 dropping by 45% against mid-2019. Overall, the HUF 636 billion Activity Start indicator for civil engineering in 2020 was almost 40% lower than the average of 2017-2019. But compared to the 2010-2016 average, this value is still 25% higher, so the period between 2017 and 2019 can still be considered outstanding.

Within civil engineering, the total value of started construction projects in road and rail segments decreased by 32% over 2019. In the case of non-road and railway construction, the drop was also significant, but we could see a more modest (15%) decrease than previously presented in the Activity Start of EBI Construction Activity Report.

The highest-value civil engineering projects launched at end of 2020 comprise, for example, the start of construction of the Budapest Athletic Stadium and the ZalaZone automotive test track in Zalaegerszeg.

2021 might be a better year for the multi-unit segment

The pandemic-related economic downturn, combined with the resetting of the VAT rate to 27% as of early 2020, resulted in a remarkably low Activity Start in the multi-unit housing market last year. The last half of 2020 recorded such low numbers that can only be found in the years 2014-2015. However, the newly introduced 5% VAT rate from this year on could halt the plunge and even generate growth in the segment, which would allow the market to return to much higher Activity Start numbers this year.

When looking at Activity Completion indicators, we get a completely different picture as the total value of completed projects last year amounted to a record high of HUF 424 billion. This is 40% higher than the previous peak in 2019 and it doubled compared to 2018. Preliminary data for 2021 are expected to have a similarly high value in completed projects. 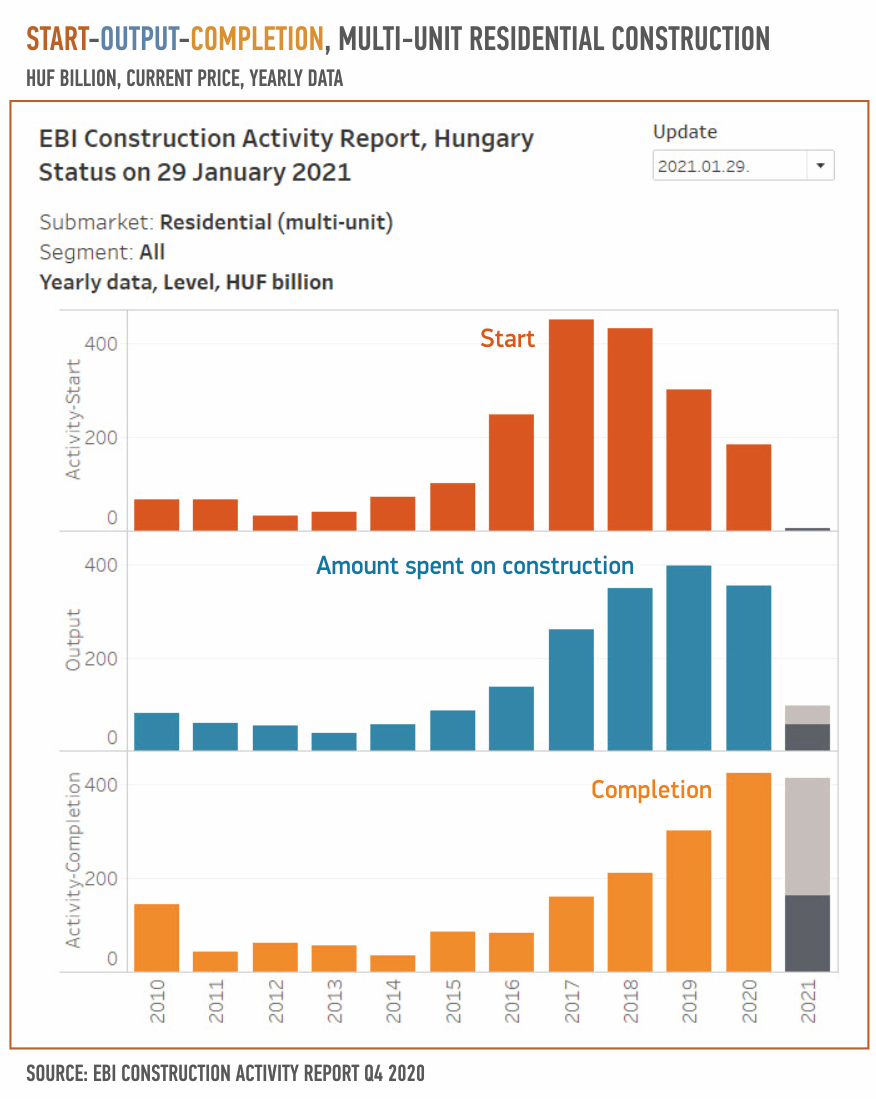 The 40% countrywide decline in the Activity Start of multi-unit housing was uneven in the regions. In Budapest, the value of projects started in 2020 went down by only 9% against 2019. However, in all other regions, the decrease was more than 40%, while in Pest county it was 85%. Due to these tendencies, regional shares have also changed. Because of the importance of Budapest, more than two-thirds of the value of the started multi-unit construction works were concentrated in Central Hungary. The western and eastern regions remained well below their multi-year average.

Last year also exceeded the record high value of 2019. In 2020 hotel construction works started on HUF 91 billion, a 6% increase like-for-like. The last quarter of last year was outstanding with HUF 36 billion of Activity Start registered, according to the latest EBI Construction Activity Report. However, this amount was distributed differently than in previous years between the capital city and rural areas. While there was a roughly 50%-50% share in 2019, in 2020 Budapest only had a 13% share and the rural Activity Start accounted for 87%. Such a low value has not been registered in the capital city since 2016. This is in sharp contrast to the 82% rural annual growth but even, in this case, there are major regional differences. In 2020, the two regions pulling the segment were northern Hungary and the Lake Balaton area. For example, at the end of last year, the construction of Hotel Hévíz (Hévíz) and the Hampton by Hilton hotels (Budapest) started. Earlier last year the construction of Minaro Hotel Tokaj, Green Resort Balatonfüred and BalaLand Hotel began.

In 2020, the value of completed hotel construction works also continued to grow, with a total of HUF 48 billion worth of hotel completions (a 33% increase). Regionally, the capital city had a higher share in the total value of completed projects (two-third) than in the case of started ones. This year is also expected to see a growth in completions and hotels could be completed at an even higher value.

Completed projects last year include Botaniq Castle (Tura) and Kozmo Hotel (Budapest), while works are expected to be completed in the first half of this year in Budapest for Matild Palace, InterCity Hotel and B&B Hotel. In the countryside, Mária Valéria Hotel in Esztergom, Erzsébet camps in Fonyódliget and the youth sports accommodation in Felcsút can reach completion. 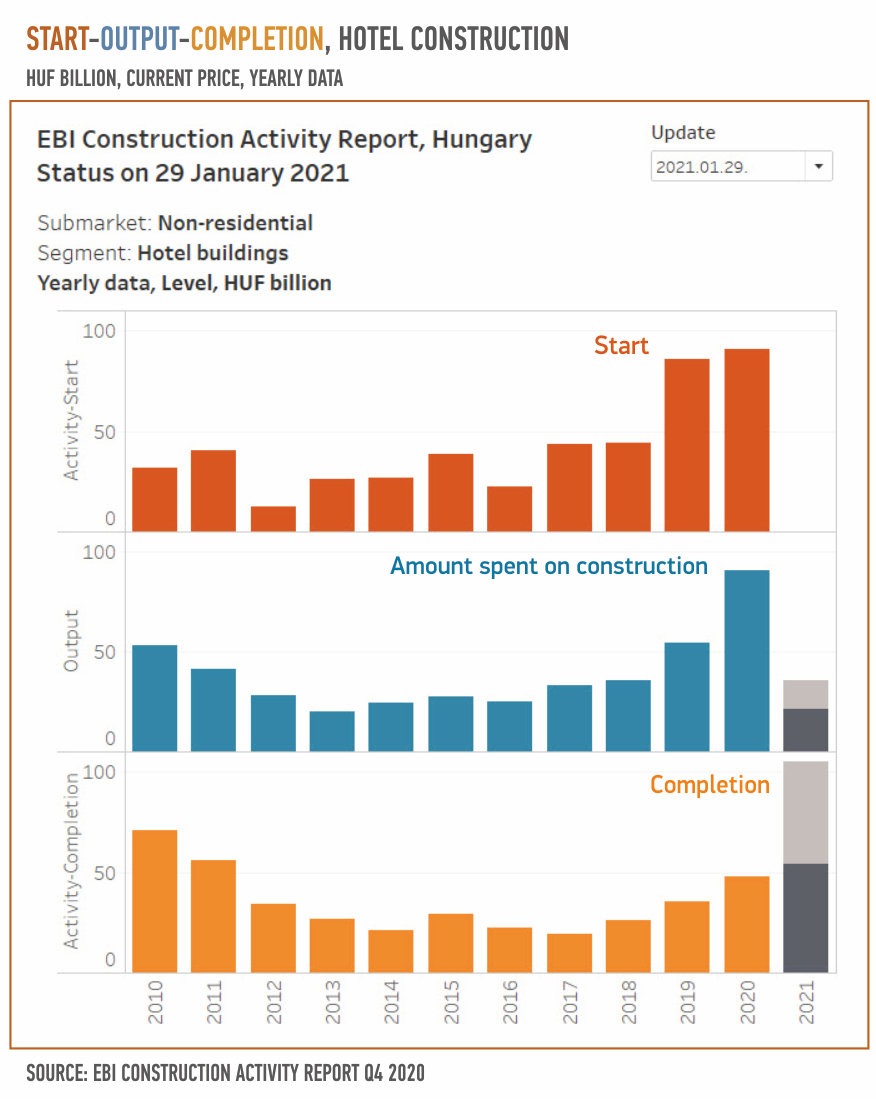 In 2020, construction works on educational buildings started at an outstanding value. Although the peak of HUF 140 billion in 2018 was not achieved and fell short of the value of 2019 by a few percentages last year, it is the third most successful year with projects having started on HUF 120 billion, far exceeding the average of HUF 44 billion in 2000-2016. For example, 2020 saw the start of construction in EMC Measurement Lab server centre in Budapest on HUF 16 billion, the Semmelweis University Faculty of Medical Sciences, Department of Traditional Chinese Medicine and St. Angela Franciscan Primary School and Grammar School, and the University of Debrecen Innovation Center and Learning Center. The renovation and expansion of the Szeged Medical Sciences Training Block can start at the beginning of this year. 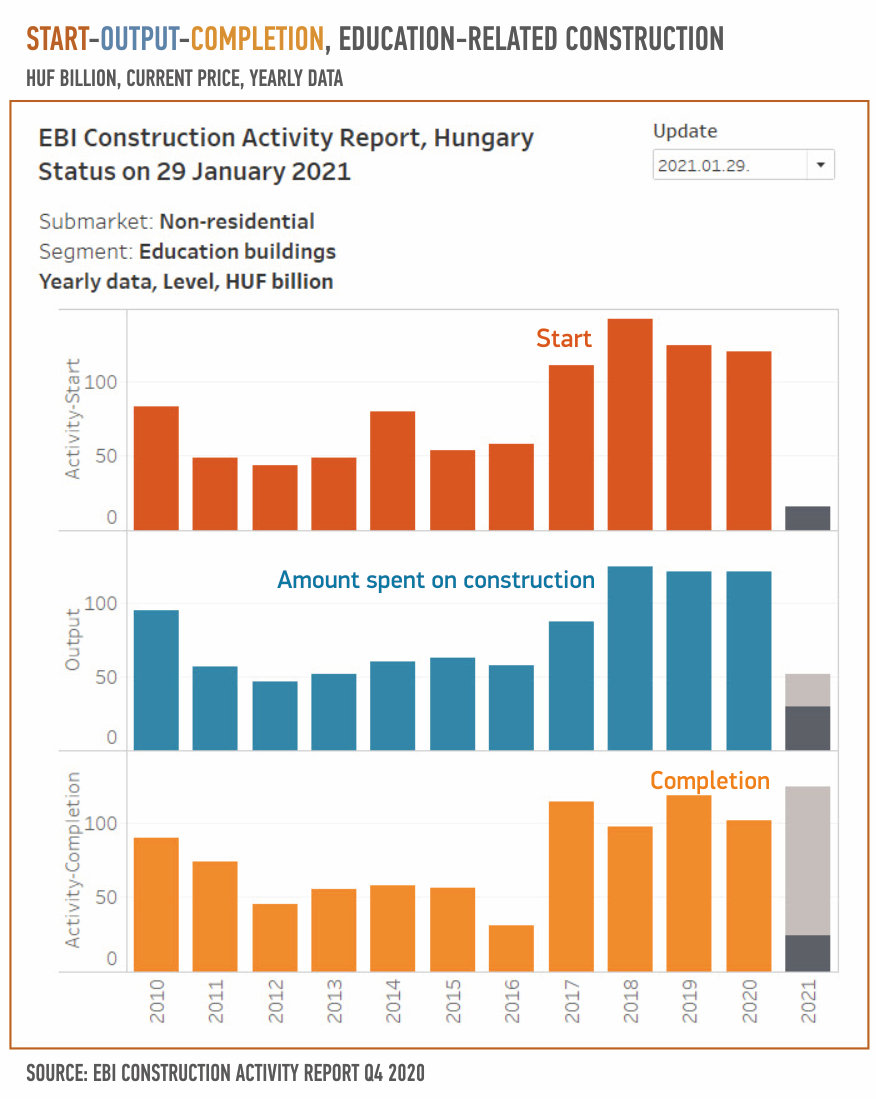