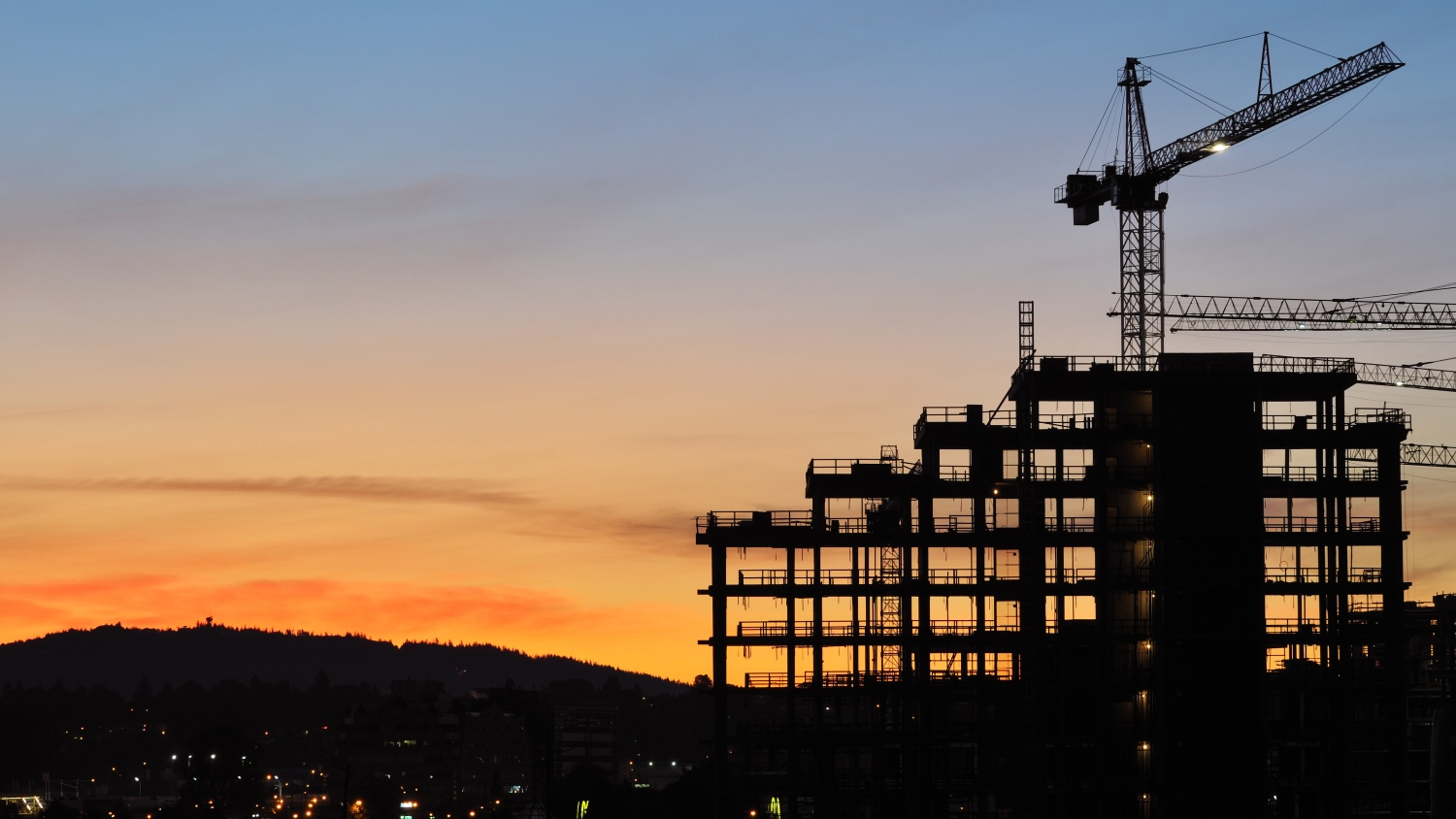 After a relative stagnation in previous quarters, Q2 2021 saw a considerable expansion in the Activity Start indicator of the EBI Construction Activity Report. It was the first three months of 2018 last that witnessed a higher value of construction works to start in a quarter. In H1 2021, projects entered the construction phase on a total of HUF 1,398 billion, marking a significant increase of 20% and 18%, respectively, against the same period of the previous two years.


The EBI Construction Activity Report examines the situation of the Hungarian construction industry on a quarterly basis, including the volume of newly started construction works, and the value of projects completed in each quarter in aggregate and by segment as well. It is prepared by Buildecon, Eltinga (creation of indicators and development of algorithms for aggregation) and iBuild (project research and project database). 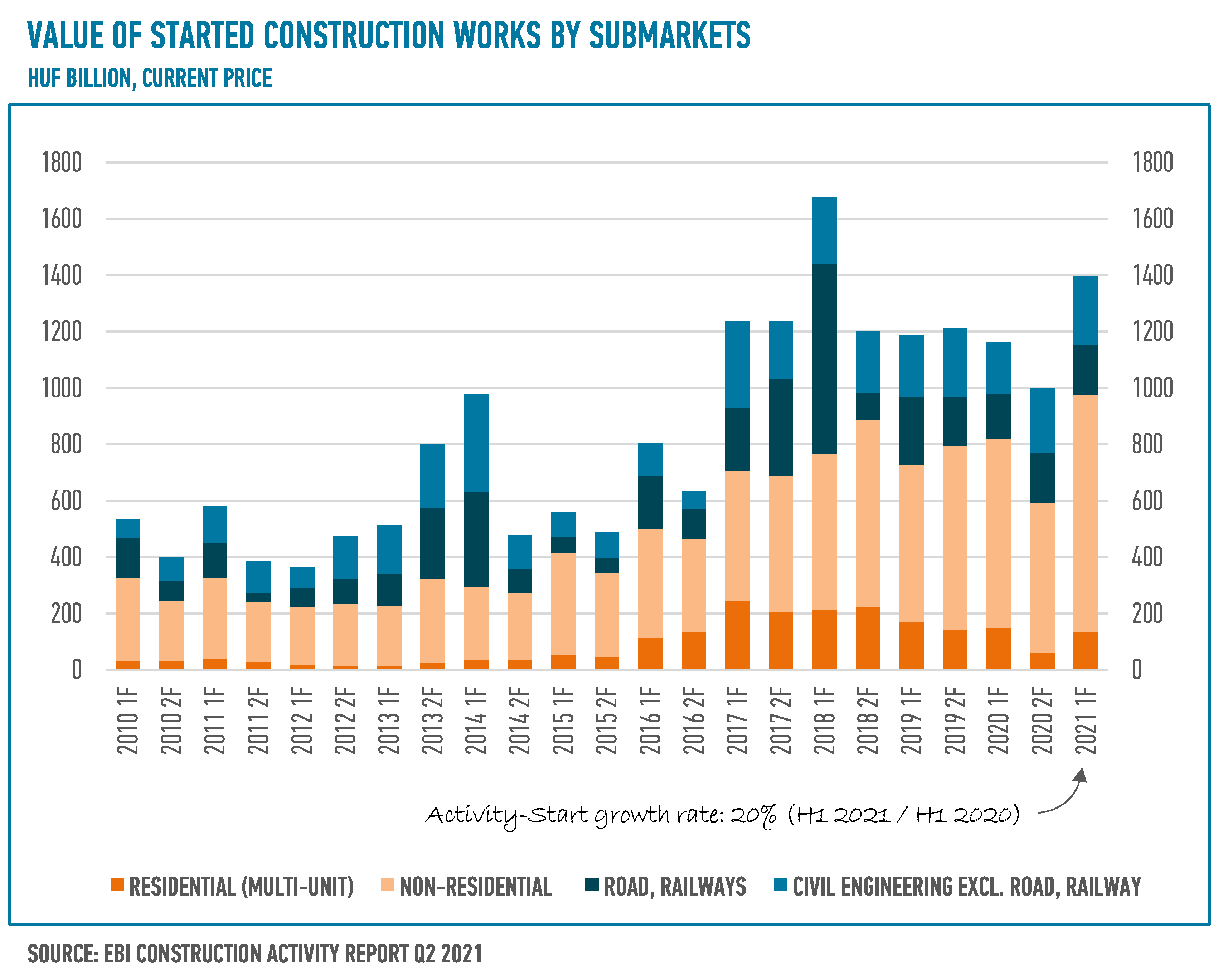 Compared to Q1 2021, Q2 2021 registered continued growth in the Activity Start indicator of the EBI Construction Activity Report for building construction. Overall, HUF 558 billion worth of construction works started in this submarket: the highest quarterly value in recent years. Due to the high figures for the first and second quarters of this year, the total value of construction works started between January and June grew by 19% like-for-like. And when compared to the same period in 2019, the rise amounts to 34%.

Within building construction, the Activity Start indicator of non-residential construction grew in H1 2021, 25% up from H1 2020. The expansion is mainly due to the particularly high Q2 figures. Projects entering the construction phase include the SK Innovation battery plant in Iváncsa and the renovation of the headquarters of the Ministry of Finance and the MNB (Hungarian National Bank) in Budapest. The construction of several office buildings also began in Budapest, like Phase I of Dürer Park Office Building and Phase IV of Madarász Office Park. In Dunavarsány the first construction phase of Dunapack plant (paper packaging) also started.

The multi-unit housing segment witnessed a significant decline in Activity Start Indicator between April and June compared to the first three months of the year. However, Activity Start in H1 2021 shows only a minimal decrease over H1 2020 due to the stronger first quarter.

The civil engineering Activity Start indicator of the EBI Construction Activity Report registered substantial growth in Q2 2021 against Q1 2021. It was also the highest value in recent quarters. In the first six months of 2021, projects entering the construction phase accounted for HUF 423 billion. Within civil engineering, both road and rail, and non-road and rail sub-markets saw considerable growth in Q2 against Q1. The biggest civil engineering projects comprise the Bóly-Ivándárda section of M6 motorway and the construction of the new Danube bridge and related road network in Kalocsa-Paks.

After an exceptionally high Activity Start value in Q1 2021 over previous quarters, Q2 data showed a major decline in the multi-unit housing segment. The value for the first half of the year is thus slightly lower overall like-for-like.

As of 1 January 2021, new homes can again be sold at the reduced VAT rate of 5% (those that obtained a valid building permit until 31 December 2022 and will be sold until 31 December 2026). The higher value of construction works to start at the beginning of the year is no surprise; given the low VAT rate, developers can now start the plans previously parked due to the 27% VAT. This may have contributed to the spike in the Activity Start of the EBI Construction Activity Report.

At the same time, there was little time left for investors to react to the VAT change announced last autumn, and it may take longer to plan and approve a completely new project. As a result, the actual start of construction works may be delayed, which may partly explain the weaker Q2 numbers. As the number of building permits rose in the first half of this year against last year (CSO data), the future may see an increase in the Activity-Start indicator of multi-unit housing construction as well. In addition, the ‘green loan’ effective from this autumn and the interest-free CSOK loan (Family Housing Support Program) for modern newly built homes may have a positive impact and increase demand for newly built homes.

When it comes to the Activity Completion indicator of multi-unit housing construction, it sank in Q2 2021 compared to Q1 2021. It may be related to the delay of construction projects as we can still expect many new multi-unit buildings to be completed in the following periods. In the first half of the year, projects worth a total of HUF 138 billion were completed.

Almost three-quarters of the total value of multi-unit construction projects that started in H1 2021 was realized in Central Hungary, but this is mainly thanks to the high numbers in Q1. In the already weak Q2, the share of launched construction projects was slightly higher than in previous years in the case of Central Hungary. The share of western and eastern regions was much lower in H1 2021 than in previous years, with the lowest share of multi-unit housing projects launched in the eastern regions.