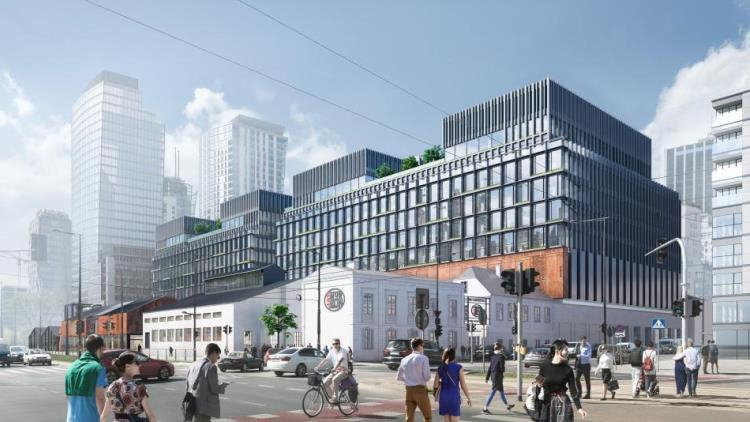 The European Investment Bank (EIB) has signed a €60 million loan agreement with ArtN Sp. z o.o., a subsidiary of Capital Park S.A., for a flagship project to revitalise the former Norblin factory site in central Warsaw. This is the first EIB transaction in Poland with a real estate investor under a project financing scheme.

The project consists of the redevelopment of a brownfield site and its full reintegration in the city’s life. Heritage buildings of the former Norblin silver-plated metals factory will be renovated to accommodate a food and retail market hall, a cinema and a cultural museum for Warsaw, while new multifunctional office space will be created in areas without heritage elements. The site will be connected to the neighbouring part of town thanks to a pedestrian area, modern parking spaces for bicycles and proximity to public transport services.
“We are pleased to contribute to this project, which is an example of how a city can develop by revitalising old, underdeveloped spaces without eating into new ones,” said Vice-President Vazil Hudák, responsible for EIB operations in Poland. “With over 70% of Europeans living in urban areas, making good use of public space is essential as it helps to turn cities into attractive and ecological places to live in.” Mr Hudák added: “This project is also very much in line with the Urban Agenda approved at EU level in May 2016 through the Pact of Amsterdam. A pact which calls on different players to work together to stimulate growth, liveability and innovation, and tackle social challenges in Europe’s cities.”
“The support received for this project from an important institution like the European Investment Bank is a sign of confidence in our group”, says Marcin Juszczyk, Member of the Management Board and CFO/CIO of Capital Park. “We have been present on the Stock Exchange for five years and have invested in numerous projects mainly related to the commercial real estate sector. This project, which is about the revitalization of the former Norblin factory, has some distinctive features among other investments taking place in Warsaw, as it brings new life and gives a new profile to this unique part of the town, which is an important element for us. Thanks to the EIB support, the financing scheme of the project will be significantly improved. We are confident that we can establish through this project fruitful cooperation with the EIB and we hope that we can work with the EIB on future projects too”.
The redevelopment of brownfield sites is particularly important in Poland and in all Central and Eastern European countries, where the transition towards a market economy and the subsequent massive de-industrialisation resulted in the creation of brownfields of all types (post-industrial, post-agricultural, post-military etc.). The need to considerably reduce land consumption is also increasingly recognised at both national and EU levels and is reflected in the Roadmap to a Resource Efficient Europe, which aims to end “net land take” by 2050.
This is the first EIB transaction in Poland with a real estate investor under a project financing scheme. Before the EIB’s involvement, the sole lender supporting the project was Polska Kasa Opieki S.A., which initially committed close to €160 million. Thanks to the EIB’s 160 million, the Polish lender was able to reduce its commitment to €99.3 million.
The property to be developed is located in the fast-growing western district of Warsaw – Wola. It has over 64 000 sqm of usable space with nine levels above and four levels below ground. The underground car park will include an automatic parking lot for 200 bicycles – a first in Poland.
The project is expected to achieve the highest environmental and energy efficiency standards with an international sustainability rating (BREEAM). The energy efficiency measures will lower the demand for electricity and heat, thus reducing carbon emissions, as well as air pollution and other negative externalities.
Returning urban brownfields to productive use supports the principles of the circular economy since this will contribute to more efficient use of space in high-value areas such as city centres and limit the consumption of greenfield land. More specifically, the project is part of the Integrated Urban Development Programme for the city of Warsaw and meets the strategic spatial planning objectives of the city authorities.