Czechs remain the most optimistic as forecasts are downgraded across CEE 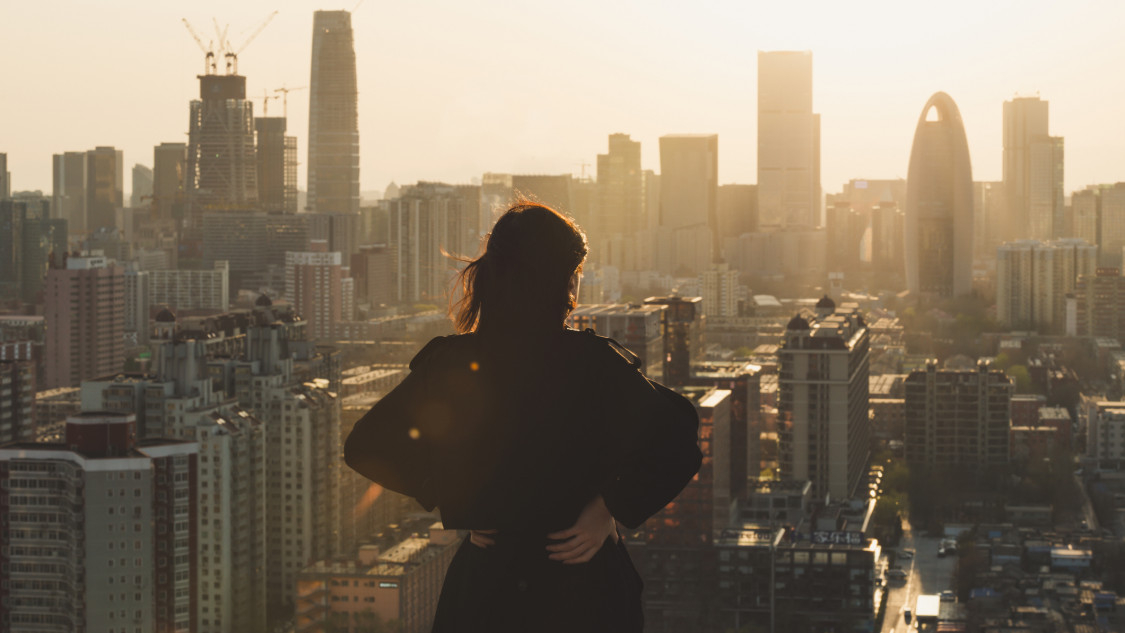 The ongoing COVID-19 outbreak seems to be having a severely negative impact on market sentiment across the CEE region, according to the latest RICS Commercial Property Monitor. Q1 2020 figures show that both rental and capital value expectations have been downgraded across the region with retail expected to see the sharpest decline and industrial proving to be the most resilient asset class.


Industrial weathers the storm better than retail and offices

In the first quarter of 2020, the RICS Occupier Sentiment Indicator (an overall measure of occupier market momentum) slipped into negative territory in all CEE countries covered in this report. Bulgaria (-30) and Romania (-34) posted the lowest readings, while the largest quarterly drop was reported in Romania (+29 to -34) and Hungary (+37 to -19). The strongest reading was published for the Czech Republic, pointing to only a modest slowdown. 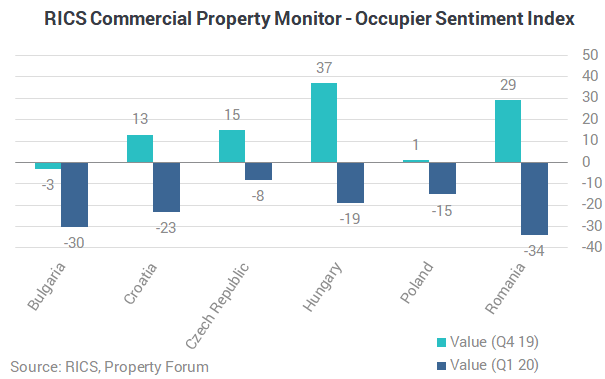 Availability of leasable space increased in Bulgaria, the Czech Republic, Hungary and Romania, remained unchanged in Poland and declined in Croatia.

12-month rental expectations were significantly downgraded across the region. In Croatia, rental growth projections fell into negative territory across all sectors, while in Bulgaria and Romania rents are envisaged falling across the retail and office sectors. Industrial rents are, however, anticipated to prove more resilient in both countries, particularly in prime locations. In Hungary and Poland, a flat outlook is expected for office and industrial assets in prime locations, while rental expectations are negative for prime retail assets and all secondary markets. The market outlook in the Czech Republic appears to be more resilient compared to other European economies. Projections, for now, remain modestly positive for all market segments apart from secondary retail space, where a decline is anticipated.

The value of the RICS Investment Sentiment Indicator (an overall measure of the investment market) also slipped into negative territory across the CEE region. Bulgaria (-18) posted the lowest reading, while the largest quarterly drop was reported in Hungary (+30 to -18) and the Czech Republic (+29 to -8). The readings in Poland and the Czech Republic are above -10, pointing to only a modest slowdown. 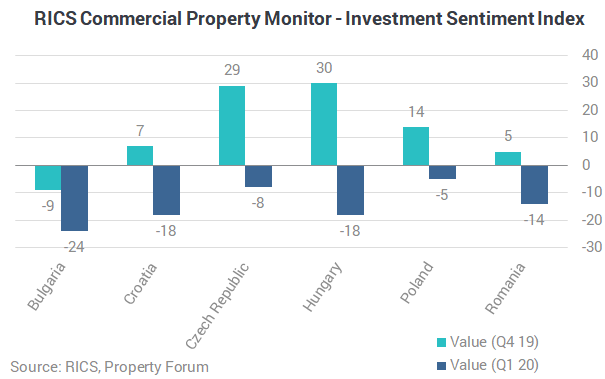 Investment enquiries (both domestic and foreign) decreased in Croatia, the Czech Republic and Hungary. Participants in Bulgaria reported a pull-back in investor demand in the retail and office sectors whilst appetite for industrial space was seen rising over the quarter. In Poland, backwards-looking indicators capturing investment demand signal a slight pick-up, although buyer enquiries did decline in the retail sector. In Romania, both domestic and foreign investor demand was still reported to have risen in the first quarter of the year, albeit at a substantially slower pace than previously.

The supply of property for investment purposes increased in Bulgaria, Poland and Romania and declined in Croatia, the Czech Republic and Hungary 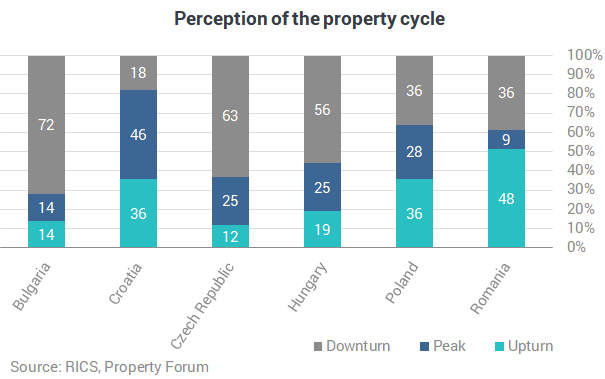 On balance, credit conditions improved in Bulgaria, remained unchanged in the Czech Republic and deteriorated in Croatia, Hungary, Poland and Romania.

Austria also feels the effects of the COVID-19 crisis

For the fourth quarter in a row, enough responses have been submitted for a report to be published on the Austrian market, where both the Occupier and the Investment Sentiment Indicator fell significantly over Q1 2020.

The OSI slipped to -32 from 0 in Q04 2019, representing the weakest reading since the survey was established in 2011. This was driven by a sharp fall in overall occupier demand, with the retail and office sectors seeing the steepest decline. Rents are expected to fall in virtually all sub-sectors over the coming twelve months with secondary retail forecasted to see the strongest decline in rental values.

The ISI also fell into negative territory, coming in at -11, compared to +27 in Q4 2019, with both domestic and foreign investment enquiries decreasing. For the coming twelve months, capital value expectations point to downward pressure emerging across virtually all sub-sectors. Prime industrial is the sole exception, where a flat trend is anticipated.

47% of respondents now view the commercial real estate market across Austria as having entered a downturn phase.