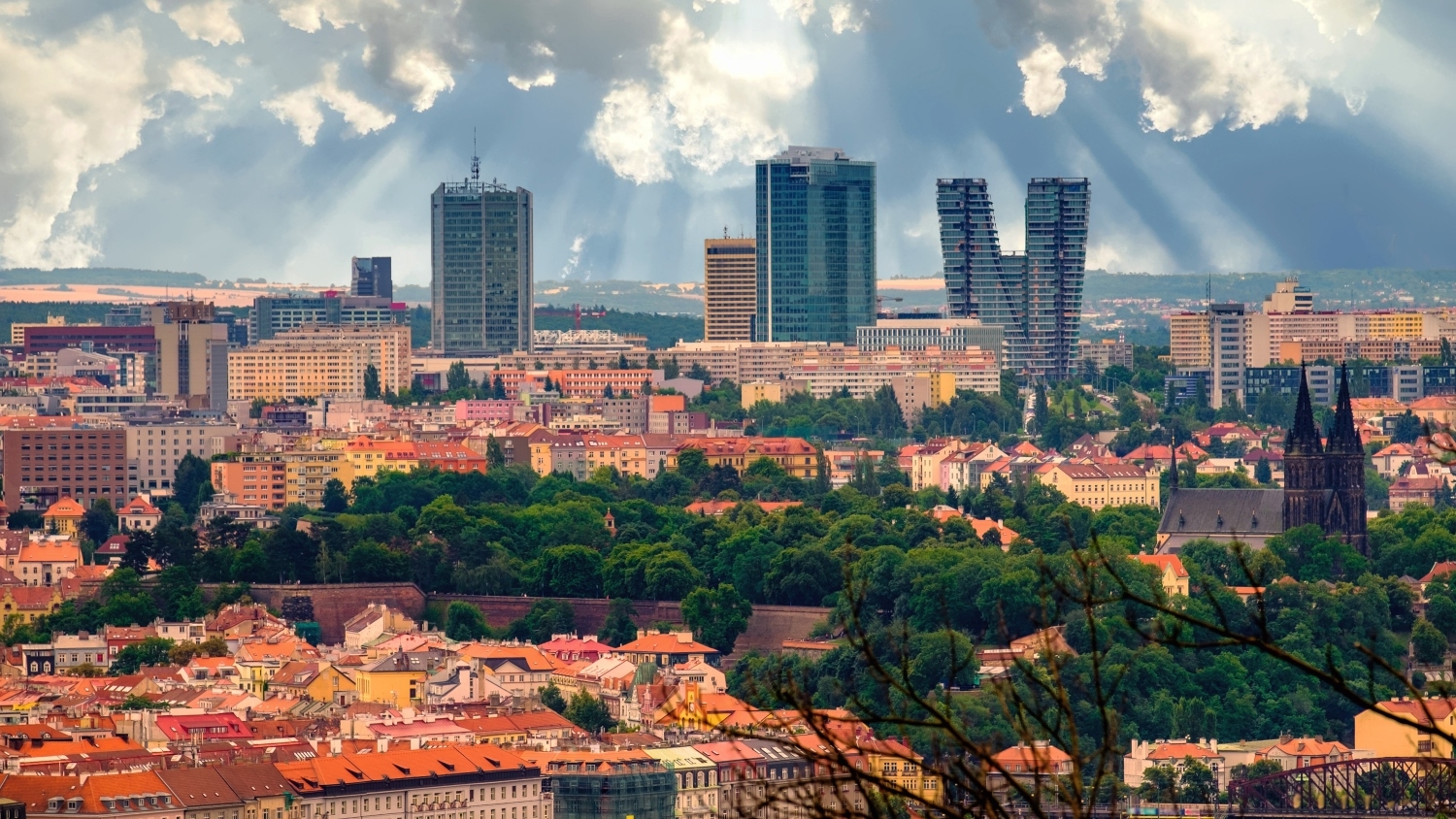 Market players still look positively toward the future of Central and Eastern European property markets but they are visibly less buoyant than they were during most of 2017. Results for Bulgaria, Croatia and Hungary are the most positive, while in Romania the picture is rather mixed. All data points to the Czech investment market being in a state close to peaking.

Occupier sentiment improves only in Hungary
In Q1 2018 the value of the RICS Occupier Sentiment Index (an overall measure of occupier market momentum) decreased in Bulgaria, Croatia and the Czech Republic, remained unchanged in Romania and increased in Hungary. Despite the mixed direction of movements, the index stands in the positive territory across all CEE countries tracked within the RICS Commercial Property Monitor. 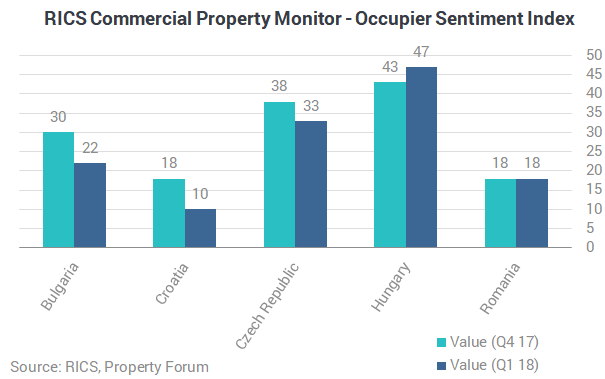 Hungary continues to post the strongest reading in the region with solid demand growth registered across all market segments. The same can be said for the Czech Republic where the retail segment saw the biggest rise in occupier interest. In Bulgaria, demand growth remained robust for office and industrial space. In Croatia and Romania, the office and retail sectors registered solid demand growth.
"The commercial real estate market in the region has been continuously growing. At HB Reavis, we experience rising occupier interest first hand for our landmark Agora Budapest project on the Váci office corridor. Constructions are at full swing for the first phase, and we especially feel the growing demand for large contiguous office spaces. The positive occupier sentiment shows us that growth is expected to continue. The needs of tenants are transforming, and developers need to respond to these changes. I believe that the future lies in offering complex services that go beyond developing building complexes. Tenants are looking for people-centric workspaces, and sustainability is an important factor in the entire commercial real estate market,” said Jan Hübner, CEO of HB Reavis Hungary.

Graduated at Brno University of Technology in Construction and Economics, he joined HB Reavis’ Czech team in 2010 and supervised the design and construction works for River Garden – the company’s first scheme in Prague. From 2012 to 2017 he supervised construction projects in Poland with an estimated total budget of approx. EUR 550 million, including some of the company’s most acclaimed office developments in Warsaw such as Gdański Business Center and Varso Place. Jan’s contribution was instrumental in establishing HB Reavis as one of the top office developers in Warsaw in just a few years. As Board Member of HB Reavis Poland, he headed the construction arm of HB Reavis in Poland, managing a team of over 50 professionals. He became the CEO of HB Reavis Hungary in September 2017. Under his leadership, HB Reavis Hungary continues the development of Agora Budapest, which will offer human centred workplaces for more than 12,000 people. More »
Looking at supply, Bulgaria and Romania were the two countries where the availability of leasable space increased in Q1 2018. In Croatia, the Czech Republic and Hungary availability was broadly unchanged at the headline level. Respondents noticed a decline across the office sector in Croatia and across the retail sector in the Czech Republic.
Average rental growth expectations for the Czech, Hungarian and Romanian markets were revised up over the quarter, with solid rental growth projections in the prime markets. Projections for secondary markets are also buoyant in Hungary and Romania. In Bulgaria and Croatia, rental growth projections were scaled back in Q1 2018. Nevertheless, the rental outlook remains solid for the prime office and retail segments in both countries.
“„In general, the Czech real estate market is in great shape, supported and boosted by a strong economy with a positive outlook. We can see among others rental growth across all sectors, turnover growth and record low yields for prime product. After a decade, the market witnessed the lowest vacancy rate in the office sector in Prague at the level of 6.2% in Q1 2018 and the strong demand continues with a high share of premises currently under construction pre-leased. In addition, the Czech Republic also has one of the lowest unemployment rates among EU countries and the market is facing a shortage of labour. Life expectancy increases and overall population growth is affecting the residential market with a relatively high pressure on the supply of new development,” commented Miroslav Barnas MRICS, CEO Czech Republic and Slovakia, Head of Capital Markets at JLL, who will chair the CEE investment panel at the upcoming RICS Prague Property Forum 2018.

Miroslav is a real estate professional with over ten-year experience with commercial and residential properties. His main focus is advising tenants and landlords, sellers and buyers on the leasing, acquisition, disposals and development of commercial and residential space in the CEE region. For the past 10 years, he was also responsible for development, management and driving forward the business of JLL in Slovakia. In January 2017, Miroslav was appointed to lead JLL´s business in the Czech Republic alongside his existing responsibilities as country manager for JLL Slovakia. Today he oversees the team of more than 110 real estate professionals in both the Czech and Slovak Republics. Besides the managing responsibilities, he heads the Capital Market team - the most experienced Capital Market team in the Slovak and the Czech market. He is responsible for ensuring that a best practice, client care, proactive communication and appropriate technical knowledge is provided by all team members. By market, he is perceived as an ambassador of ethical approach and transparent dealing. Miroslav is a qualified surveyor and member of Royal Institute of Chartered Surveyors.  More »

The Czech market is very close to peaking
The value of the RICS Investment Sentiment Index (an overall measure of the investment market) decreased to some extent in all five CEE countries. Nevertheless, the index suggests further improvement in the regional investment market, but at a more moderate rate than over previous quarters. 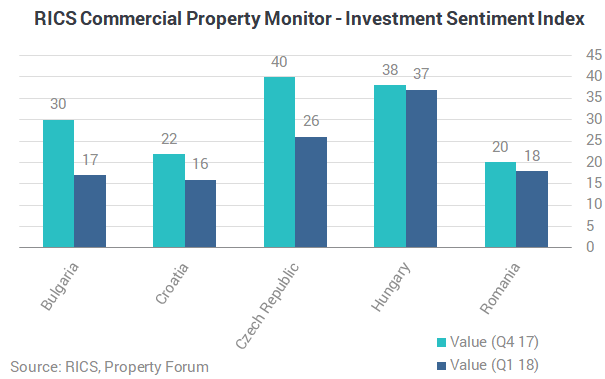 Investor demand continued to rise at the headline level in all CEE countries surveyed by the RICS. In Bulgaria, the Czech Republic and Romania the pace of growth slowed in comparison to Q4 2017, while in Croatia it remained unchanged. In Hungary investment enquiries continued to rise over the quarter with demand growth increasing in each area of the market, Once again, this was led by robust investor demand for office space. Office and industrial attracted the most interest in Bulgaria, the Czech Republic and Romania. Respondents noted growing interest from foreign investors across the region.
“Romania has good perspectives in the sense of increased investors’ interest in office product in Bucharest mainly, but also in second-tier cities. The office space delivered at the beginning of the year is all occupied with vacancy decreasing in Bucharest Class A buildings, while there are several office products which are in advanced discussions, under exclusivity, with investors – some of them totally new to the country.
Retail was doing very well, year on year sales figures showed an increase, not at the level we have had in 2017, but very comfortable (also considering the first quarter is usually the lowest in sales, especially if like this year with Easter outside the quarter). Again the interbank market evolution is of the nature to influence consumption quite heavily so it is interesting how this will evolve throughout the year,” added Ana Dumitrache, Head of Investment Property at CBRE Romania.

Ana Dumitrache is Head of Investment Properties for Romania working in the Bucharest office of CBRE. Ana was a real estate banker in Bucharest for more than 15 years, of which around nine years for Erste Bank real estate division, including Immorent. In such position, she has screened most of the real estate assets in the country and has built business relationships with all the players active on the Romanian market. She has also been involved – on the finance side - in all major M&A transactions on the real estate market in Romania within the last ten years, and has actively contributed to the transactions realization. Ana, who has just joined CBRE team in Romania, is responsible for creating bridges between the developers and property owners and investors ready to deploy funds in Romania. She will play the trusted advisor role, with very good knowledge of the market and its specifics, but also with a recognized ability to create feasible structures which can satisfy even the most conservative institutional investors.  More »
The supply of property for investment purposes increased in Bulgaria, Croatia, Hungary and Romania, whereas in the Czech Republic supply declined across the board.
In Hungary, 12-month capital value expectations were revised up across all areas of the market from Q4 2017 with the prime sectors still expected to outpace the secondary markets. Capital value projections for the Czech Republic also remained solid in Q1 as contributors revised up their expectations for prime office and industrial assets. In Bulgari and Croatia respondents slightly trimmed their forecast. The picture appears to be mixed in Romania where capital value projections were upgraded in the prime office and retail markets and downgraded in the secondary industrial and retail sub-markets.
In Bulgaria, Croatia and Hungary the majority of contributors feels that the market offers fair value at present. In the Czech market the share of those who feel that the market is overvalued increased further, to 40% in Q1 2018 from 21% in Q4 2017. The Romanian market once again is rather mixed with around 40% of respondents stating that the market is undervalued and another 40% believing that it is rather overvalued.
The majority of respondents in Bulgaria, Croatia, Hungary and Romania believe that market conditions are consistent with the early to middles stages of an upturn. It is worth to note that the share of those who feel that the market is close to peeking has grown in Bulgaria and Hungary. 83% of respondents now believe that the Czech market is close to peaking.
On balance, credit conditions eased in Bulgaria, Croatia and Hungary and deteriorated in the Czech Republic and Romania. Respondents in the Czech Republic have now reported a marginal decline in credit conditions for two consecutive quarters.