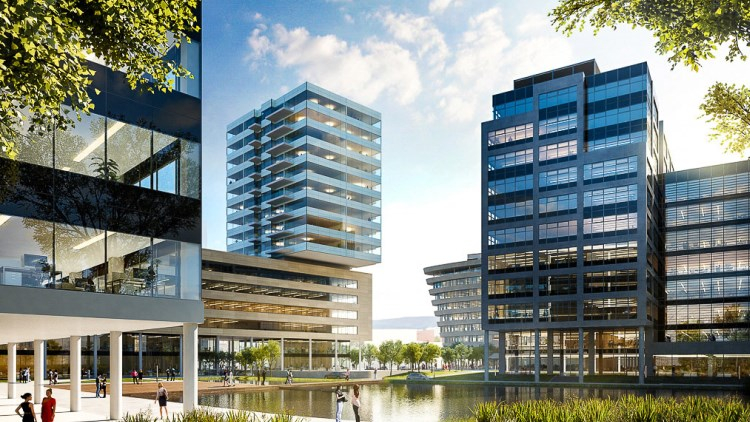 Located across Dornych street from Galerie Vaňkovka in central Brno and bordered also by the streets Přízová and Mlýnská, Vlněna is a redevelopment of a brownfield consisting of a cluster of factory and office buildings originally operating in textile production. The first stage of the Vlněna development, called FGH, is a complex of three buildings, which have a total 18,000 sqm of rentable space, of which some 16,000 sqm is offices. CTP attracted two heavyweight IT tenants to the property, Avast, which moved into about 8,000 sqm, and Oracle, which is taking about 6,500 sqm. Software developer STRV, which acts as a strategic partner for startups, also has a 400 sqm office in the complex.
“Building H is fully leased, and in FG we have about 1,500 sqm immediately available; there are also some retail spaces available on the ground floor,” said Jiří Kostečka, Senior Business Development Manager at CTP. “On the ground floor we already have Rebel Bean – they are coffee roasters supplying locally and this is their first cafe.” For the remaining spaces, Kostečka says there is interest in providing new concepts to the area, particularly with respect to the usual fast food offer.
The H building, bearing an unconventional organic shape was designed as a white “flagship” of the entire Vlněna complex, explains Václav Hlaváček, the project’s author at Studio Acht. “Located in the corner of the Vlněna complex, it welcomes visitors into the new square in the middle of the grounds and also neighbours the diagonally led main street. It is in this locality that a large number of people are expected to move around and flow over the H building from three directions – from secondary Přízova Street over to main Plotní and Dornych Street into the square of Vlněna.” Using the notion of a pebble washed by streams, Hlaváček adds that the visually exposed building is meant to appear different depending on the viewer’s position: “This optical changeability naturally fits into the chosen concept of intermingling organic streams.”
More buildings in construction
The next stage is already under construction, and includes the AB buildings, offering together 22,000 sqm, as well as the Bochner Palace (2,000 sqm) which is being reconstructed. “We have a first client for the AB buildings, Moravia IT which has taken 8,000 sqm and moves into AB in the second quarter of 2019.” The Bochner Palace is the one historical building that was retained on the site; it housed the former offices of the entrepreneur who established Vlněna and dates back to the 1860s. “It’s one of the oldest Neo-Renaissance palaces in Brno,” noted Kostečka, adding that building is scheduled for delivery in Q2 2019.
CTP has also recently gone ahead on the next three buildings of Vlněna, says Kostečka. “We decided to start speculative development of 30,000 sqm, buildings CDE; we’ve just started construction and plan to deliver this to the end of Q2, 2020.” Building I, located along Dornych, is now in the planning permit stages as the final shape is being finalized. “We plan in total to build 90,000 sqm until 2021, and we have additional land, which is directly connected, where we are able to develop other buildings; so with that we have a total 130,000 sqm on the table,” says Kostečka, noting that plans could change as the master plan and land situation develop. Investment into the first five buildings amounts to slightly below CZK 3 billion, and the overall investment into Vlněna could be from CZK 5–8 billion, depending on the final timing of future buildings.