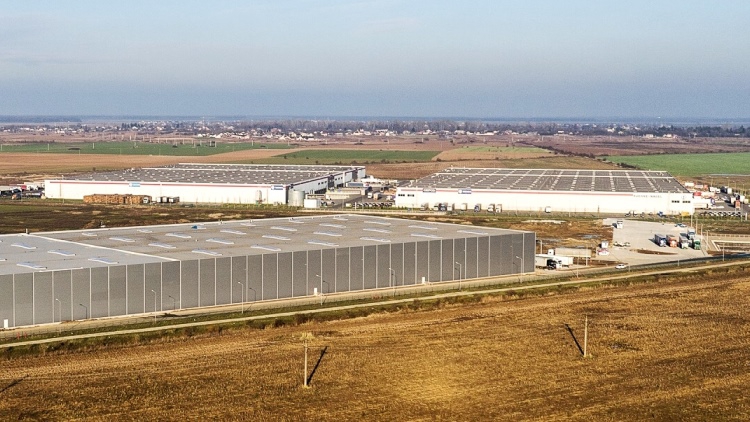 CTP, the European Bank of Reconstruction and Development (EBRD) and BCR announced the closing of a credit facility totalling €75.8 million, of which €36.7 million were granted by EBRD and €39.1 million by BCR. The loan will support the expansion of CTPark Bucharest West by two new warehouses totalling over 70,000 sqm. The total investment in this expansion phase will reach €108.9 million. With a total planned 600,000 sqm lettable area, CTPark Bucharest West is designed to become the biggest, as well as fastest growing industrial park in the country and the region. BCR acted as mandated lead arranger, documentation, facility and security agent.

“We are very pleased to reach this agreement that helps us take another major step towards making CTPark Bucharest West the most important logistics park in Romania, in terms of total surface, but also development pace and standards of quality. We aim to be a strategic park for the Romanian economy through the support we offer for significant investments, both foreign and local. This loan also represents the first cooperation between CTP and EBRD, alongside our long term financial partner, BCR (at local level) and Erste Bank (at group level). Moreover, we are confident that this will only be the beginning of a fruitful collaboration between CTP and EBRD”, stated Ana Dumitrache, Country Head of CTP Romania.

Matteo Patrone, EBRD Director, Regional Head for Romania and Bulgaria, said: “We welcome CTP’s drive for green certification, which is not yet standard in the Romanian logistics market. Green leases are also a new feature in the logistics sector in Romania, which will not only benefit the cooperation with tenants but will strengthen CTP’s competitiveness in the market.”
Sergiu Manea, CEO of BCR, commented: “We believe in CTP’s strategic call to develop high-tech business parks for leading international and domestic companies making strategic investments in Central Europe and Romania. In particular we believe that we can support Romania’s competitive edge in the region by financing strategic projects in logistics infrastructure,”
CTPark Bucharest West is located 23 kilometers west of Bucharest City Centre, and has direct access to the A1 highway. The total park size to date is of about 100 ha, with 244,000 sqm GLA upon finalisation of the two warehouses which are under construction. The industrial park spreads in 8 warehouses strategically placed on both sides of the highway. Since building certification of logistics assets is not yet very common in Romania, this project is expected to demonstrate advanced building sustainability standards. The two warehouses that are currently under construction are expected to become operational in 2017.
CTP plans to beat the development target of 700,000 sqm across Romania ahead of schedule, as it already has over 400,000 sqm under construction, additional to the existing 615,000 sqm GLA. Thus, CTP plans to reach a total GLA of approximately 1 million sqm no later than Q1 2018, while the company estimates it will have around 1,250,000 sqm GLA in Romania at the end of 2018.