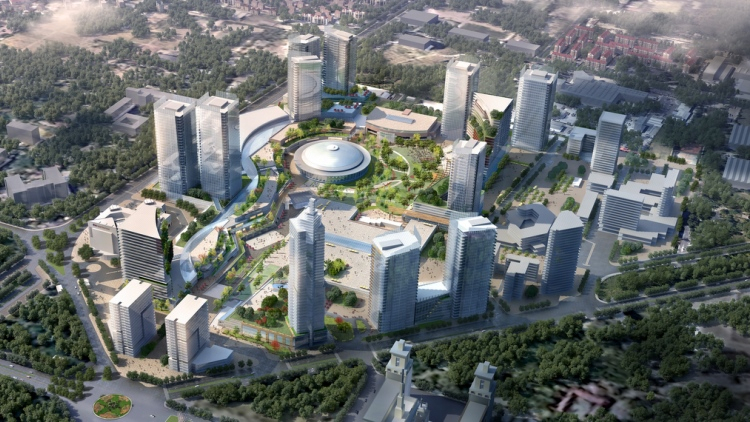 The Romanian Chamber of Commerce and Industry (CCIR) and real estate developer Iulius are proposing a large-scale mixed-use project around the existing Romexpo Exhibition Center in Bucharest. The €2.87 billion investment plan would the see creation of the city’s largest business district with over 30,000 new jobs, museums and a multi-use event hall, a new park and green urban connections, a retail and lifestyle centre and 12,000 parking spaces.


The project would host the first Art Museum in Romania dedicated exclusively to the sculptor Constantin Brâncuși. Moreover, the central pavilion would be reconfigured into the George Enescu Multifunctional Hall, offering the capital an artistic space per the international standards. The project integrates the Romexpo exhibition pavilions which it reconfigures and upgrades into a large conference and congress centre adapted to the needs of a European capital. The Museum of Monetary History and the largest Oceanarium in the country are also included in the plans.

The Romexpo Exhibition Center would also include a central park, sodded gardens, mature trees and luxuriant vegetation, walking alleys, an esplanade and plazas – all open to the public. The new park, which would cover 30% of the project area, would render a direct connection to the Regele Mihai I al României Park and a green connection from Charles de Gaulle Square up to the heart of the project.

The development implies large investments into new solutions for the modernization of the vehicular and pedestrian infrastructure, as well as the increase of urban connectivity. The traffic decongestion project is developed in collaboration with one of the top specialized companies in Europe and includes the creation of new vehicular roads and enlargement of certain vehicular traffic lanes, as well as bicycle lanes and facilities that add to the urban mobility. Moreover, the largest parking lot in Romania would also be developed, including more than 12,000 underground and above-grade parking spaces.

The office component of the project would concentrate on the main multinational companies in the tech sector and more, generating more than 30,000 new jobs. Furthermore, other 2,000 jobs are estimated for the construction period. Moreover, there would be a centre for Romanian entrepreneurship, unique in the country, with co-working facilities capable of generating opportunities for the local business sector.

A retail complex that supplements the lifestyle centre concept would also be present. The project includes the largest space dedicated to local manufacturers and retailers in a fresh market concept developed for the first time in Romania. A 5-stars hotel, as a supplementary function to a large-scale exhibition centre, is also included in the plans.

“The proposed project represents the materialization of a new development vision for the entire country, one that will represent us beyond borders, and bring us closer to Europe. It is an action that exceeds anything we have built so far in terms of urban revival, and we are certain that it will become an international landmark. This development is about community, Romanian symbols and local potential,” stated Iulian Dascălu, the president of the Iulius Company.