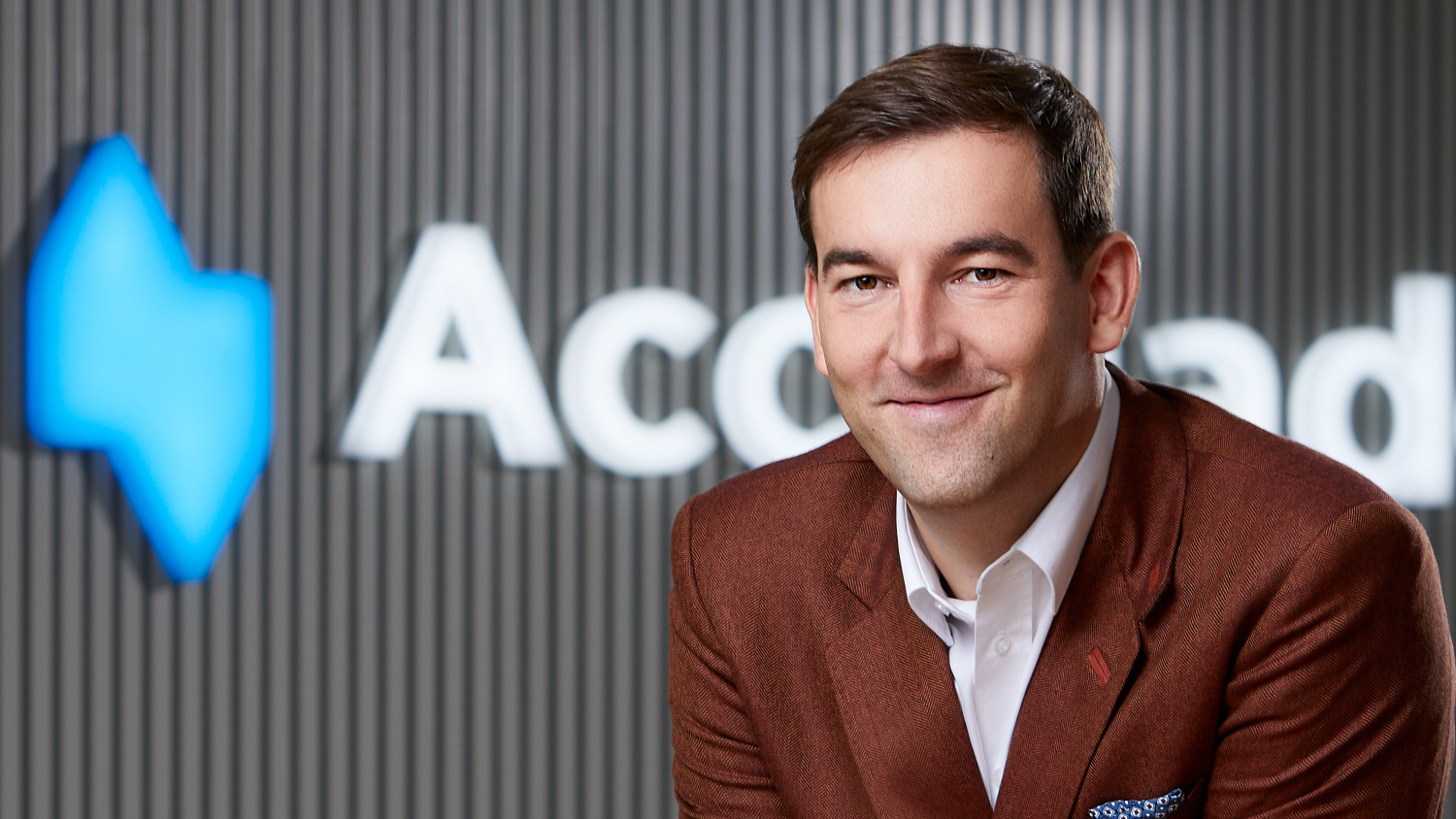 The industrial and logistics market has not been directly influenced by the Ukrainian war, but inflation, rising interest rates and changes to our supplier-customer relationships are affecting it indirectly, says Accolade Group CEO Milan Kratina. Nevertheless, he thinks that there are still a lot of aspects which haven’t changed for a long time, such as the shortage of warehouse and manufacturing space or the ongoing trend of nearshoring. And all of this is raising the demand for a more self-sufficient Europe.


You founded Accolade 11 years ago. What motivated you to enter the logistics market at that time?

I found my way into the industrial zones sector more or less by accident when I was studying law 15 years ago. And what motivated me to found Accolade 11 years ago? The huge shortage of well-equipped industrial and logistics sites in the Czech Republic. I saw it as a great opportunity and over the course of several years, we have been able to set up more than a million sqm of plots for future industrial parks. And this is where we are today. We operate in six European countries; we are closing in on 50 industrial parks and our 2 million sqm of commercial property is leased to more than 140 interesting tenants from around the globe.

In 2011, he founded Accolade Group, which focuses on investing in modern, sustainable and environmentally friendly facilities for companies in the e-commerce, manufacturing and logistics industries. In 2014, Milan co-founded Accolade Industrial Fund, an industrial real estate fund for qualified investors, which currently has more than 2,500 investors. Milan Kratina graduated in law from a university in Brno and started his professional career at CzechInvest, a public investment agency, but soon began to devote his full attention to Accolade. Today, the company is one of the most influential players in the industrial infrastructure market in Europe. In addition to the Czech Republic, where the world's most environmentally friendly warehouse has come to life under the leadership of Accolade in Cheb, the group is also active in Poland, Slovakia, Spain, Germany and the Netherlands. More »

How have the industrial and logistics markets changed in the Czech Republic since then?

The Czech market has grown 2.5 times from 4 million sqm to more than 10 million sqm. In Poland, for example, it has nearly quadrupled, from 7 million to nearly 27 million sqm. The number of vacant spaces has fallen dramatically – to approximately a third of 2011 levels, which means the vacancy rate currently stands just under 2% in the Czech Republic and 3% in Poland. But what do these figures mean? A lot of tenants came to the Czech Republic and Poland from the fields of manufacturing, logistics, and e-commerce, and have invested tens of billions of euros, contributing greatly to the growth in our countries’ living standards. The value of a square metre of industrial property has doubled. So you can now afford to build on more expensive plots of land with higher costs, which has given the green light to the conversion of brownfield sites into industrial parks.

The make-up of tenants has also changed over those ten years. There has been a strong emergence of e-commerce companies which now match or even surpass traditional manufacturing and logistics companies in terms of demand. It would be remiss of me to not also mention sustainability as part of modern industrial property, something which has become increasingly important in recent years. We definitely feel more pressure from our tenants, investors, and financial markets. It is now a non-negotiable requirement – taking a long-term view of the environmental impact of business has gone from a ‘nice to have’ to a ‘must have’, and this is reflected in our investment decision criteria. Certificates documenting the sustainability of buildings and the construction methods used will become necessary and required by legislation as time goes on. What’s more, financing non-sustainable projects will become much more troublesome, if not impossible. At the same time, it is important to stress that the current geopolitical situation has a direct impact on the energy industry, which only increases the urgency for businesses to move in this direction.

Indeed, our long-term priority has been to use brownfield sites wherever possible. In our nearly 10 years of operation, we have built up a commercial property portfolio of around 2.4 million sqm, worth around €2.3 billion. During this time, the proportion of revitalised brownfield sites has grown to 35%. The total area of redeveloped sites is therefore around 870 thousand sqm.

Besides clearly being environmentally friendly, brownfield sites are also promising locations for future tenants due to their industrial history, which offers excellent technological, energy, and transport infrastructure. We also add value by continuing the local traditions of a given location but in a new green way. In doing so, we create new business opportunities and push for the living standards to be raised in the whole region where we are operating.

A great example is the Karlovy Vary Region in the west of the Czech Republic, where the revitalisation of the former engineering plant in Cheb is currently being completed. During the renovation of these run-down sites, 90% of the construction and demolition waste is recycled. The first building in this park, now leased by Kaufland eCommerce Fulfilment, was recognised as the most environmentally friendly industrial building in the world. As part of its BREEAM certification, it received the highest rating of ‘Outstanding’, with a record score of 90.68%.

Are you planning further brownfield investments?

At the moment we have 19 projects on brownfield sites. We are planning several more large-scale projects in the Czech capital of Prague and the surrounding area.

Accolade and Panattoni have now started to build the largest logistics site in the Czech Republic near the town of Cheb. What can you tell us about this project?

We can currently only confirm that we are investing in the construction of a new site for a multinational firm in our park near Cheb. For a long time, the Karlovy Vary region has lacked the confidence to think of itself as one of the best places to invest in Europe. We are very happy that we were able to successfully put to good use the years of care and preparation of this plot, which will now contribute to the development of a modern industrial zone in Cheb and help to raise living standards in the region.

You are currently operating in several European countries - the Czech Republic, Slovakia, Poland, Germany, and Spain. You have also announced a new facility in the Netherlands. Are you considering entering any other markets?

The Accolade Group has entered several new markets in recent years, such as Spain and the Netherlands, and is now about to expand to other countries in the West. At the same time, Accolade is further strengthening its position in its existing markets and will continue to do so. In recent years, it has been working hard on developing western Poland, where the group's warehouse space now totals 580,000 sqm and is set to double in the future. This makes Accolade one of the leading investors in the region. Over the last two years alone, Accolade's portfolio has grown by 70% and the group aims to continue growing at a similar pace.

How has the pandemic and geopolitical situation changed your business? What have you had to start doing differently?

Besides the huge amount of human suffering that war brings, it is and has always been, very expensive. The impact on the market as a whole will be significant and already, we are seeing it. In all areas of human life, there is now a degree of uncertainty. Since the start of the conflict, there has been talk that all types of construction will slow down due to rising prices and material shortages, not to mention the still sizable dependence on Russia for energy.

So, the war is not impacting our segment directly but perhaps indirectly – the effects of inflation, the rise in rates, and changes to our supplier-customer relationships. Nevertheless, there are still a lot of aspects which haven’t changed for a long time such as the shortage of warehouse and manufacturing spaces or nearshoring, which in itself is starting to raise the demand for a more self-sufficient Europe, the need to make and store more on the Old Continent. On a business front, the key for us ahead of the upcoming winter is caution and modelling risk scenarios.

The fundamentals, i.e., the demand for industrial property from a range of tenants, are still there. At the same time, tenants are managing to pay their rent. We will see how the situation develops over the next 24 months.

Since 2014, you have also been running a prime industrial property fund, Accolade Fund Sicav. How would you describe the fund’s strategy? What’s next for it?

The Accolade Industrial Fund is for qualified investors, of whom there are currently nearly three thousand. The fund is focused on investments in commercial property such as industrial and logistics buildings which generate regular returns through rent. Investing in this fund is suitable for those who are interested in a consistent and stable investment product through which they can allocate a portion of their funds into the property and diversify their portfolio. By the end of 2021, the Accolade Industrial Fund managed assets worth over €1.2 billion, owning 27 industrial parks with around 89 tenants in the Czech Republic, Poland, Germany, and Slovakia. The total leasable area of all these properties is more than 1.2 million sqm.

Within the remit of the Accolade Industrial Fund, we are currently monitoring two trends which are in contradiction with each other. The first indicates that interest rates may rise generally across Europe. As a result, there may be pressure on yield growth. That also, however, means a faster return on investment resulting in a possible drop in property prices. The second, contradictory trend is that of a significant increase in rents, which could actually lead to a rise in property prices. The market is becoming more expensive and there is still a shortage of warehouse spaces – so there remains some scope for rents to increase. At the same time, inflation clauses are starting to be enforced, which we believe to be effective investment protection. Such clauses guard against at least 80% of the impact of inflation.