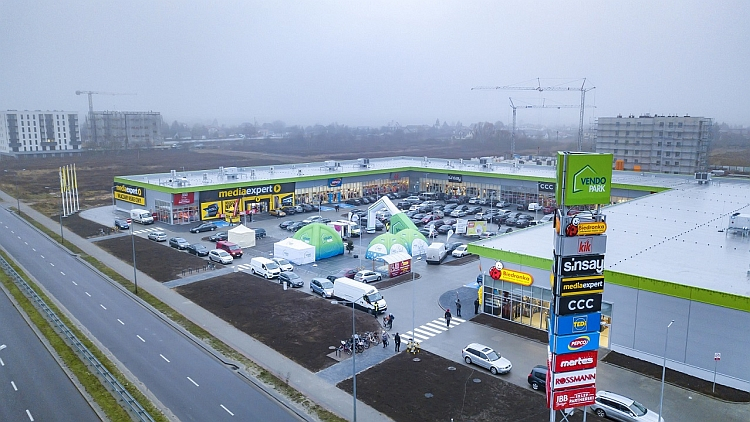 Trei Real Estate GmbH, an international developer and asset holder for residential and retail real estate, has opened two new retail parks under the Vendo Park brand in Poland within a single week. The properties are located in Łuków (Lublin voivodeship) and Władysławowo (Pomeranian voivodeship). This means that Trei has achieved its objective of opening six Vendo Parks in Poland this year. The total value of the two investments equalled approximately €17 million.


The new Vendo Park in Łuków has a lettable area of around 6,800 sqm and is occupied by nine different retailers. Among these tenants are Biedronka, Rossmann, TEDi, KiK and Pepco. Łuków lies in the Lubin voivodeship in south-east Poland and has a population of around 30,000. In addition to its retail units, the new retail park provides 170 parking spots.

The property in Władysławowo is currently occupied by eight tenants on a combined lettable area of 5,600 sqm and includes 190 parking spots. Eight stores, including outlets of Pepco, Rossmann, KiK, TEDi and Netto among others, have already opened for business. The new Vendo Park is conveniently located between a Lidl discount supermarket and a supermarket of the Biedronka brand. Moreover, McDonalds will open a branch next door during the second quarter of 2021. Władysławowo has about 10,000 residents and lies on the Baltic seaboard in the Pomeranian voivodeship, roughly an hour’s drive north-west of Gdansk.

Pepijn Morshuis, CEO of Trei Real Estate, commented on the opening: “We are very pleased to report that we managed to open not one, but two, Vendo Parks this week. We have thereby achieved our goal to create six new retail parks in Poland in 2020. Despite the coronavirus pandemic, both projects were completed on schedule. This is explained not least by the great popularity of Vendo Parks even and especially during the pandemic because they have few community areas. By opening these two retail parks, we are also responding to the strong demand for retail outlets in smaller towns, which continue to be underestimated, according to our market analyses.” Morshuis added: “Next year, we plan to expand at the same pace, and to develop additional Vendo Parks in Poland.”

Overall, Trei currently holds 31 Vendo Parks in its portfolio, of which 21 are located in Poland now. In 2021, Trei plans to open another six to seven Vendo Parks, including in Zielonka, Piekary Śląskie, Koszalin, Myślibórz and Oświęcim. The long-term objective is to complete at least 50 assets of this brand within the next three years.