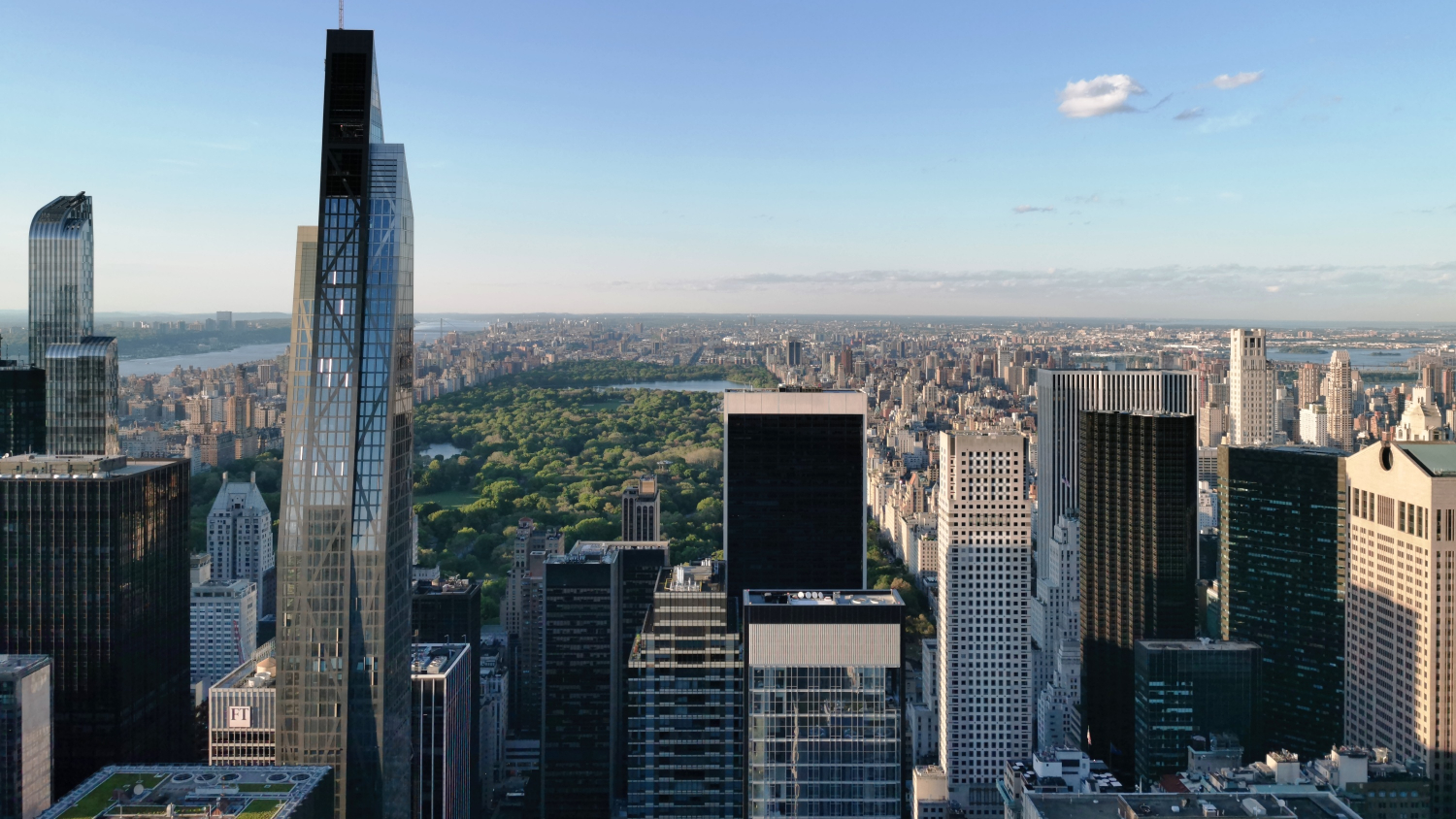 New York, Los Angeles, London, Tokyo and San Francisco are the top five most resilient cities in the world, according to Savills, as they continue to harness their power as gateway locations, benefitting from a virtuous circle of large companies gathering to take advantage of business ecosystems and large talent bases, thereby attracting more talent, contributing to strong economic performance and robust real estate markets.


As part of its 2021 Impacts programme, the international real estate advisor assessed 500 cities using metrics centred around four core themes – economic fundamentals, knowledge economy and technology, ESG, and real estate. These metrics determine which cities have remained resilient in the face of Covid-19 and which cities will continue to evolve to face new market and natural forces in the firm’s Resilient Cities Index 2021.

New York, Los Angeles and London head the rankings, followed by Tokyo, San Francisco, Paris, Seoul and Boston. However, Savills notes that a number of smaller European cities with populations of fewer than three million make it into the top 20. These cities generally score highly for their ESG credentials and strong knowledge economies, having well-educated populations and developed tech scenes. In particular, Stockholm takes 12th position and Amsterdam 17th. 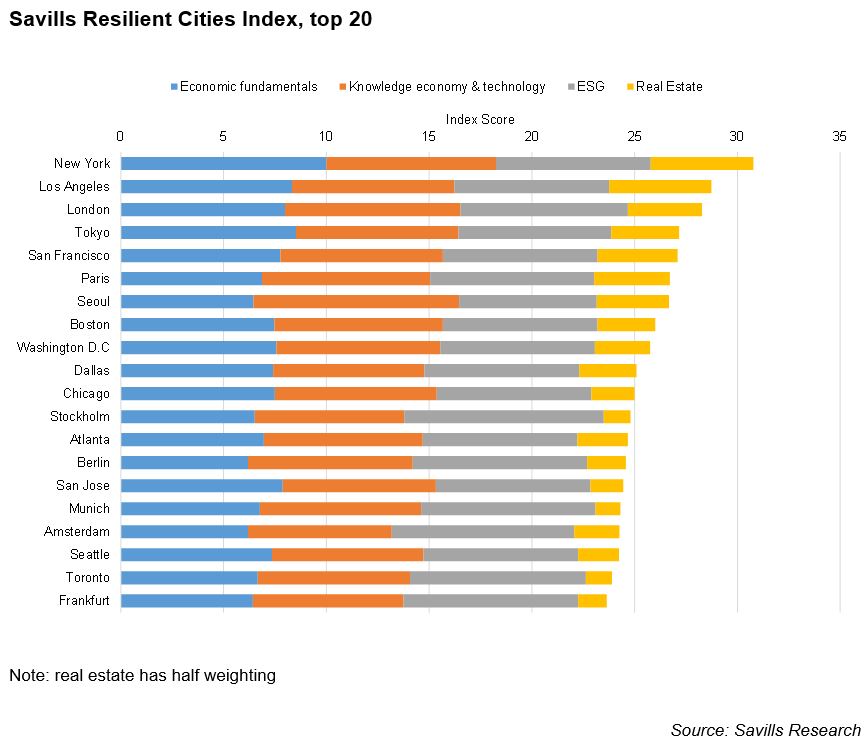 The top of the 2021 Savills Resilient Cities Index is dominated by large cities with deep and liquid real estate markets, meaning they are unlikely to be undermined swiftly by change. For businesses, Savills says, agglomeration benefits have not gone away during COVID-19: proximity to competitors, collaborators, and highly-regarded educational institutions remain important.

Looking at real estate metrics alone, despite a dramatic fall in commercial transactions across all markets in the year to Q1 2021, Savills says that the largest cities retained their prowess, although Los Angeles nudged New York off the top spot for the highest total real estate volumes globally, while Paris exceeded London for a second year. Seoul, meanwhile, while ranked the 7th most resilient city overall, is 6th based on real estate alone and was the only city in the top 10 to increase investment volumes in 2020.

Savills Resilient Cities Index rates cities on national ESG factors, as data at a city-level is scarce. This puts Nordic cities at the top of this metric, as they score highly for use of renewables, food and water security, natural resources and electric vehicles. Cities in New Zealand and Canada, the only non-European nations in the top 10 for ESG, also score well for these factors.

Looking at the economic strength metric, while Tokyo and London feature highly they are exceptions within their regions as US and Chinese cities dominate when measured on this metric alone, with the US taking five spots in the top 10 and China three. Given economic forecasts, Chinese cities are expected to see strong rises in domestic wealth, coupled with continued GDP growth, but Savills also highlights Bengaluru in India and Ho Chi Minh City in Vietnam for expected rapid growth in GDP over the next five years, with compound annual growth rates of 9.8% and 8.5% respectively, which will boost them up the Index.

Simon Hope, head of global capital markets, Savills, comments: “Covid-19 caused some to question the future of cities themselves, however, it’s clear they remain the most important locations for human interaction and therefore real estate investment. But the world is evolving – and not just due to the pandemic.

“New York, Los Angeles, London, Tokyo and San Francisco remain resilient and at the top of our Index for now, but it’s notable that none of these cities’ nations score highly on ESG. Given the direction of travel and that real estate investors are increasingly adopting sustainability-led strategies, if on a country-wide basis the adoption of ESG principles is slow, it’s imperative that developers, landlords and occupiers work on an individual, collective and city basis to literally build in resilience to prevent future issues.”

Sophie Chick, Savills World Research, adds: “Our first Savills Resilient Cities Index in 2019 looked at city GDP, private wealth and demographics, but to reflect changing times we’ve added many other metrics in 2021, including ESG. While this hasn’t dramatically altered the top of the Index – New York, Tokyo, London, and Los Angeles all featured highly then as they do now – what’s interesting is that smaller cities are evolving and their strong knowledge economies, talent bases and ESG credentials are allowing them to catch up. These smaller cities should continue to rise, alongside locations in China and India, which will climb as they become wealthier and improve their environments to compete more evenly with global megacities. Others to watch include Denver, Houston, Phoenix and Philadelphia in the US, Copenhagen, Denmark, Zurich, Switzerland, in Europe, Melbourne and Sydney in Australia and Auckland in New Zealand.”

Stuart Jordan, managing director, Savills CZ&SK, adds: “In metrics of economic fundamentals and real estate, Prague finds itself well within the uppermost quartile. Equally, with an increasing focus on ESG, it is great to see national factors combining to push the Czech Republic to a ranking of 25th out of the 83 nations assessed.”