Reconstruction of iconic Bratislava building is on the horizon 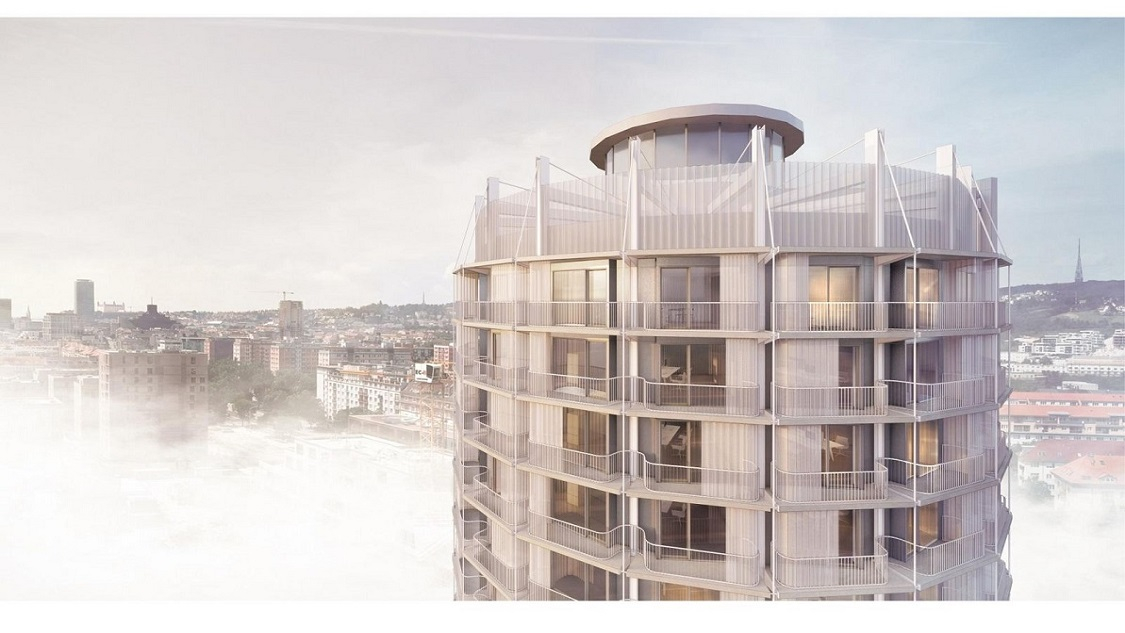 The military boarding school Hviezda in Bratislava, also known as "Kukurica", has been dilapidated for many years. The iconic high-rise building from the 1970s has a distinctive architectural style yet is a local landmark. However, it may already be on the verge of being saved. The Ministry of Defence of the Slovak Republic (MoD) has started taking the first steps towards reconstruction, according to Slovak websites reality.trend.sk and yimba.sk.


The iconic Hviezda high-rise military dormitory in Bratislava has been in a deplorable state for more than three years. The local landmark belongs to the premises of the Slovak Ministry of Defence and is visible from all around. Despite this, its poor condition, which has prevented its use, has been discussed since at least 2013. However, the Ministry of Defence has already started to address this. Although they have not announced an architectural competition, they have approached architecture and design students, according to the urban planning website yimba.sk.

"The contractor for the verification study of the reconstruction of the "Kukurica" building for the Slovak Ministry of Defence was the Faculty of Architecture and Design of the Slovak Technical University in Bratislava, Belluš studios. The jury of FAD STU BA selected from 4 collective proposals and then the Ministry of Education of the Slovak Republic also selected from 4 collective proposals," said Martina Kovaľ Kakaščíková, spokesperson of the Ministry of Education of the Slovak Republic. For the jury, the emphasis on maximum preservation and presentation of original structures, materials and architectural details was decisive. "The design should make use of original paving, ceiling elements, suspended ceilings, staircase structures, monumental artworks in the parterre and other elements. The revitalization design should focus on preserving the tectonic articulation of the building envelope. The entire structure will then consist of a steel system working with columns and steel beams."

According to yimba.sk, while the ministry has not yet confirmed that it will continue to work with the winning study, it has not explicitly ruled it out. "The next stage of the project's preparation will be handled by the MoE through a public procurement," Kakaščíková explained. In this way, not only this studio can apply, but also others that will follow the winning solution. The Star will continue to include accommodation facilities, but also administration and additional services for staff and residents. "The estimated cost is €34.8 million including VAT," Kakaščíková estimates.

The Ministry of Defence of the Slovak Republic is likely to carry out activities related to the preparation of the reconstruction during this year - design work, permitting or the organisation of public procurement. "The expected date for the start of implementation is in 2023-2024. It depends on several factors, such as the processing of the next stages of project preparation, the issuance of construction permits, economic evaluation by the Value for Money Unit of the Slovak Ministry of Finance and the issuance of the approval of the Slovak government," Martina Kovaľ Kakaščíková summarises, adding that the current international security situation should not affect the reconstruction.

The Hviezda dormitory building was built in the 1970s according to a winning design by architects Cyril Sirotny and Ján Strcula. The building was designed to house approximately 780 students at the military academy on the military campus. The tower is circular in plan, with a reinforced concrete core 10 metres in diameter in the centre, containing plumbing, showers, toilets or a common room. On each of the 25 floors, there are seventeen double rooms with balconies. From this mass, there is an extended circulation area with four lifts and a staircase. It was the first circular high-rise building in Slovakia and at the time of its construction was reputedly one of the tallest buildings with a circular plan in Europe. It earned the nickname "Kukurica" almost immediately from the characteristic combination of the shape and articulation of the balconies.