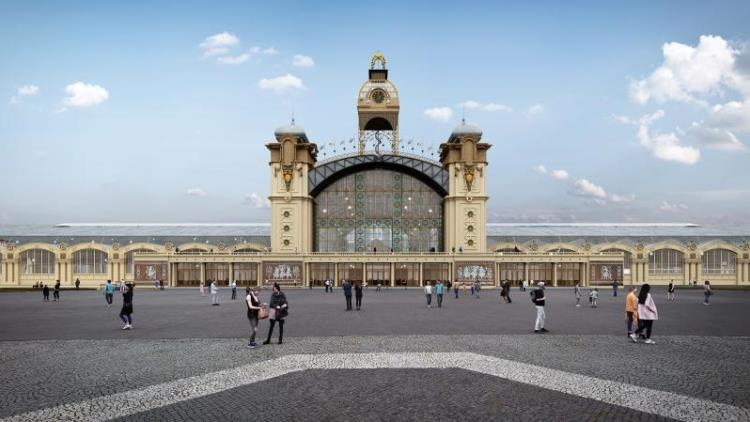 Thirteen years after the fire in 2008, the large Industrial Palace in Prague has begun renovation. Its reconstruction began on 1 February this year and should be completed within three years. According to the Czech Press Agency, the cost of the reconstruction is expected to be CZK 2.64 billion. The reconstruction will be carried out by a consortium led by Metrostav, Prague's City Hall announced.

"Today we handed over the keys to the Industrial Palace to the builders and started its reconstruction. We are ticking off another of the things we wanted to get done this term. The left-wing burned down in 2008 and the people of Prague have been waiting 13 years for its reconstruction. So far, they have only heard promises. In three years we managed to prepare this huge investment, get it up and running and start erasing this debt to the Prague citizens," says Pavel Vyhnánek, Deputy Mayor of the Capital City of Prague. He is in charge of the Prague Exhibition Grounds.

A detailed engineering geological survey and a supplementary hydrogeological survey for the heat pumps will first have to be carried out at the site of the left-wing that burned down. The first phase of work this year will result in extensive excavation and groundworks, securing the construction pit and downstream parts of the building. These works will be followed by the laying of the foundation slab of the left-wing of the Palace and the construction of the reinforced concrete structures of its perimeter walls. The work in the central hall and the right-wing in the initial stage will be mainly marked by the reconstruction of existing technological channels, the construction of new collectors for the installation of technologies and the restoration of historically valuable elements. Specialists will start with passporting and restoration surveys, removal of historical elements from the interior of the building such as parquet floors or stained glass windows affected by the fire and protection of those that are an integral part of the building.

For the reconstruction and completion of the Industrial Palace, which is a protected cultural monument, the consortium of companies deployed experts from the team that recently reconstructed a similarly valuable building - the National Museum. The public contract for the reconstruction of the Industrial Palace was awarded to a consortium called the Company for the Industrial Palace (the leading consortium - Metrostav DIZ s.r.o., followed by AVERS, spol. s.r.o.; SYNER s.r.o. and Metrostav a.s.). These are established companies with extensive experience in similar projects in terms of complexity and amount of investment. "I believe that we have managed to assemble a strong team of experienced professionals with references from similar challenging projects. We are looking forward to the implementation, which is a great professional challenge for us, and we will do our best to carry it out to the satisfaction of the investor and the citizens of Prague," says Karel Volf, Chairman of the Board of Managing Directors of Metrostav DIZ s.r.o.

Long-term preparations for the largest intervention in the area were also carried out by the joint-stock company Výstaviště Praha. Despite the local restrictions on construction, the site will live on. The lower part of the Výstaviště and its sports zone will be in full operation during the construction. The Křižík Pavilion D, which was modernised last year, or the other Křižík pavilions, the Bohemia Restaurant or the Spirál Theatre, which were gradually reconstructed, will offer alternative spaces for rent for events.