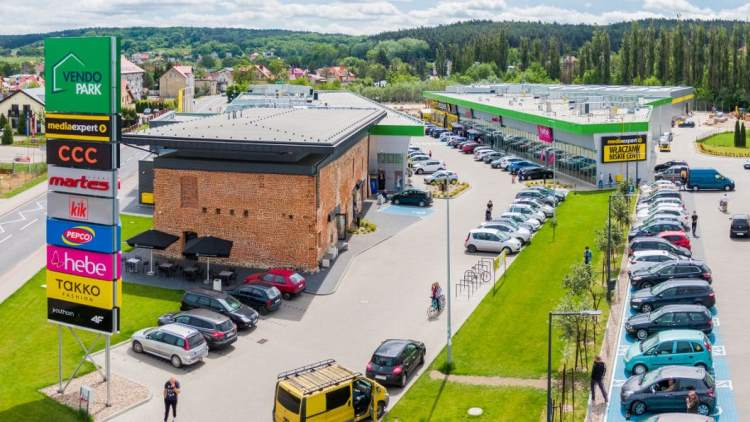 Trei Real Estate GmbH and JLL jointly published a new market report on retail parks and convenience centres in Poland, according to which the segment has followed an upward trend for years, and not even the coronavirus pandemic has impacted its performance. One of the reasons for this is that the stores located here often stock food and everyday products. Moreover, the retail units generally have their own entrances and are directly accessible from the parking lot. Shoppers appreciate this aspect because it makes it easier for them to minimise exposure.


The prime yields of retail parks and convenience centres remained stable at 6.8 percent during H1 2020. Overall, 14 transactions in a combined volume of €430 million were closed in this segment between January and June of this year. Prime rents for large units ranged from €8.00 to €12.00 per square metre and month. According to JLL, such rates are paid for retail units of about 2,000 square metres. Among the competitive advantages of these properties are their low service charges (for common-areas, etc.). The charges range from €1.5 to €2.0 per square metre and month and thus amount to roughly one-tenth of those paid at classic shopping centres in Poland. Lease agreements tend to be signed for terms of five, seven or ten years plus renewal options. The rent levels are fixed in euros and paid in zloty. This way, the arrangement eliminates the currency risk for foreign investors.

Pepijn Morshuis, the CEO of Trei Real Estate, commented: “I’m pleased that we managed to follow up on our debut report in 2019 with a second, improved report on retail parks and convenience centres in Poland at this time. Its findings confirm our expansion strategy in this market. While the market for retail parks in Germany is largely saturated, we continue to see signs of significant demand in Poland. The places where they are most needed include smaller towns and rural regions.”

Pepijn Morshuis serves as CEO of Trei Real Estate since 2015. His responsibilities include the departments International Transactions, Asset Management and Development. Before joining Trei, he spent 19 years working for Dutch asset manager The IBUS Company, the last eleven years thereof as its CEO. At the time, IBUS was a globally active, independent real estate investment and asset management company. Before, he was Auditor at Arthur Andersen. Morshuis looks back on a total of 25 years of real estate experience and has been responsible for development and repositioning projects involving office, residential and retail properties in Europe, the United States and Asia. More »

The floor space stock adds up to around 2.6 million sqm

During the 1990s and the early 2000s that followed, the retail real estate market was defined by large-scale shopping centres. It was not until later that retail parks gradually spread. While the category accounted for only 9 percent of all retail units in 2010, its share has climbed to 13 percent since (2020). According to JLL, retail parks fall into three sub-categories – these being large retail parks of regional significance (regional centres), classic retail parks and convenience centres. Overall, the floor space stock in this segment adds up to 2.6 million square metres. Regional centres account for 54 percent of the total, convenience centres for 27 percent, and classic retail parks for 19 percent.

In spite of the coronavirus pandemic, about 130,000 square metres of gross lettable area came on-stream during H1 2020. It is the equivalent of five percent of the entire stock. Another 171,000 square metres—the equivalent of 6.3 percent of the stock—are under construction and will come onto the market before the end of 2020 or in 2021. The vacancy rate in retail parks is currently 3.0 percent. In recent years, it fluctuated between 3.0 and 4.8 percent.

Retail parks were quick to recover once the lockdown in Poland was lifted. Jacek Wesolowski, Managing Director of Trei Real Estate Poland, commented: “We did not expect the retail parks to recover so quickly after the outbreak of COVID-19. After reopening, some tenants registered sales as high as 160 percent of the pre-lockdown level.”

In regard to the strategy of Trei in this segment, Morshuis had this to say: “We want to become the biggest retail park investor in CEE. Overall, Trei currently holds a portfolio of 29 Vendo Parks, of which 19 are located in Poland, six in the Czech Republic and four in Slovakia.”

The next retail parks, located in Zielonka, Lukow and Wladyslawowo (all of them in Poland), are yet to open before the end of this year. The long-term objective is to complete at least 50 assets of this brand within the next three years