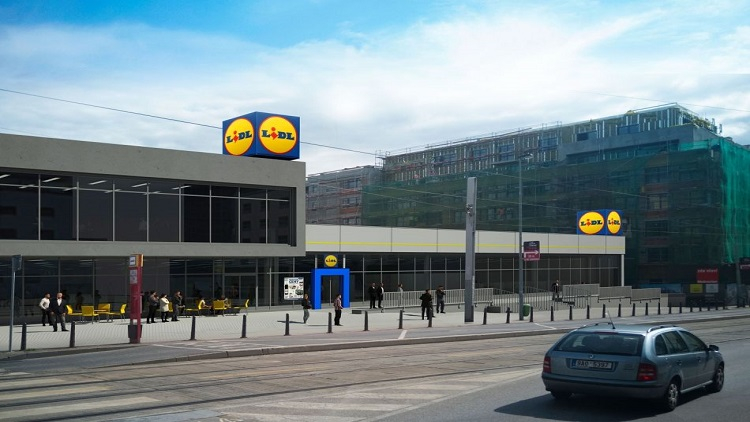 Lidl, the discount grocery chain, plans a store on Prague's Na Příkopě street. It will use the premises of a historic building, the former headquarters of the Czechoslovak Commercial Bank. The grocery store will be located next to the Hamleys toy store. Lidl expects to open a new store in the middle of the year, the Czech News Agency (ČTK) reports. Na Příkopě Street ranks around 20th in Cushman & Wakefield's ranking of the world's most expensive streets.


Limits of the historical buildings...

The grocery store will cover an area of 1,140 sqm. The construction work is intended to affect the character of the building as little as possible, so there will be many atypical elements in the space. "Fitting the store into this unique space is a challenge for us and we believe that the new store will simplify life, especially for residents of the adjacent neighbourhoods, but also for employees and visitors to the city centre who do not have access to a grocery store in their immediate vicinity," said Lidl spokesman Tomáš Myler.

The building at the corner of Na Příkopě and Panská streets was renovated about ten years ago by Immofinanz and Lordship. It offers retail and office space as well as an underground car park. In the past, a house called U tří lip (At the Three Lime Trees) stood on this site, where the famous Czech fairy tale writer Božena Němcová died in 1862. In the 1930s it was replaced by a new building which became the headquarters of the Czech Industrial Bank.

"Food chains have been expanding very dynamically in recent years and it is understandable that with the higher density of their networks they naturally consider specific locations, which Na Příkopě certainly is," Jan Janáček, Head of the Retail Leasing team at CBRE, told to ČTK. The discount chain's operations in this lucrative location should not devalue the street in any way, he said. "This is a commercial space, if the operator was able to accept the conditions of one of the two most expensive streets in the Czech Republic, it is quite sure of the demand and potential that this location offers," he added.

Lidl announced at the end of 2019 that it would focus on redeveloping existing buildings to accommodate new stores due to a shortage of land in major city centres. The company currently operates 289 stores on the Czech market.