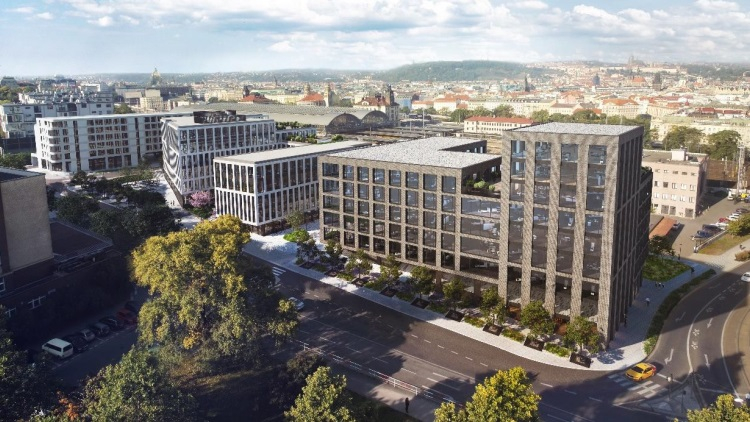 Cushman & Wakefield has mapped the office property market in detail and made a chart of the largest owners and the most active developers of office buildings in the main markets of the Czech Republic. At this point, there is 4.23 million sqm of office space in the Czech Republic. CPI Group is the biggest owner with 22 properties taking up 5% of the total area. The three biggest office owners in Prague control about 15% of the entire market. Penta Investments has been the most active developer over the course of the last ten years. 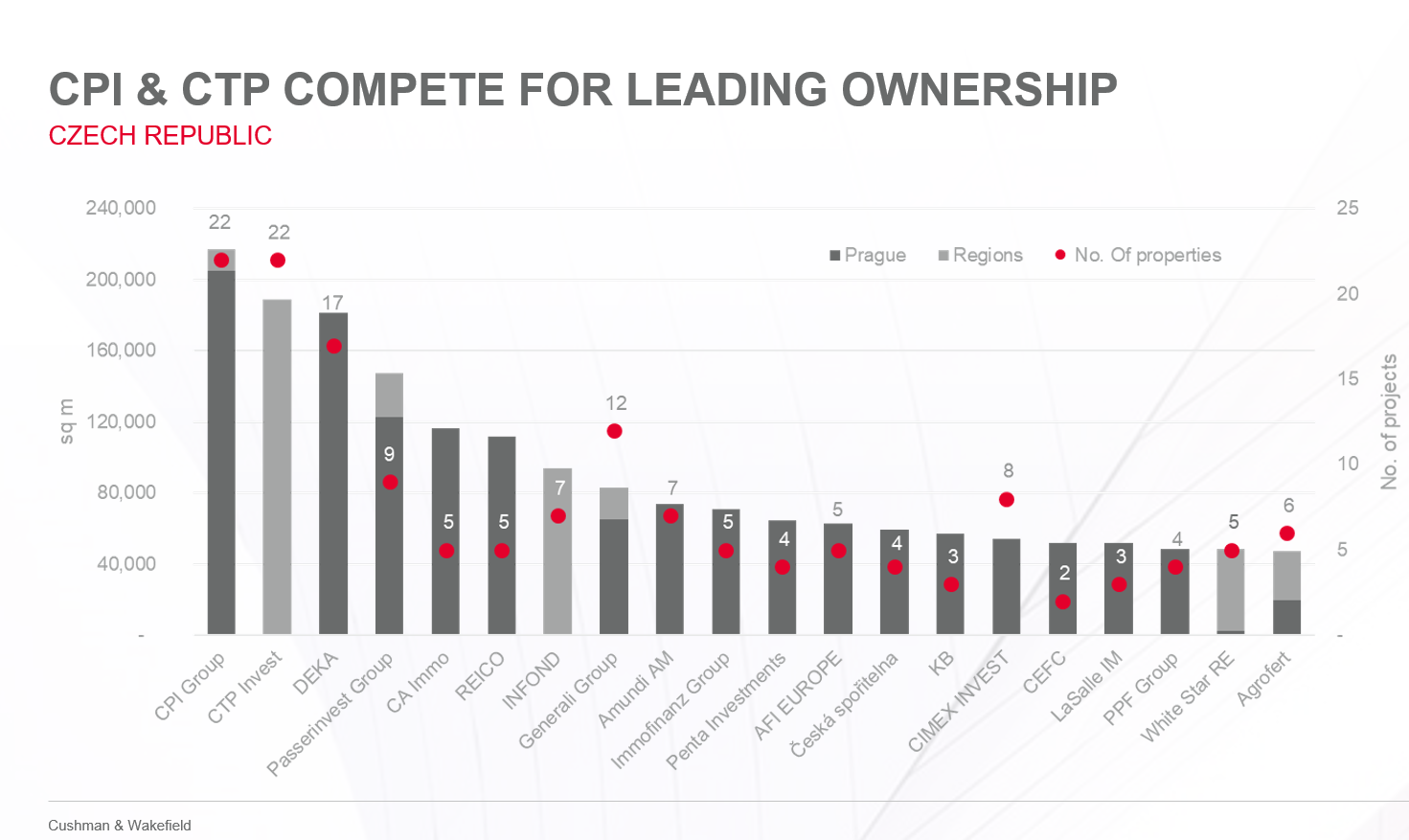 “Although the three biggest owners own a considerable market percentage at 15%, the Prague office market remains quite fragmented. In addition, the individual investors’ portfolio structures can differ considerably; while CPI Group owns multiple small projects, including class B, Deka and Passervinvest bet on large class A projects such as The Park in Chodově or BB Centrum,” says Radka Novak, Head of the Office Agency Team at Cushman & Wakefield.

Czechs control the office market
65% of the domestic office market is Czech-owned. International investors are dominated by those from the neighbouring countries – German investors own 7% and Austrian investors own 6%. Italian companies control 3% of the market and American 2%. The percentage of the market owned by local investors is somewhat smaller in Prague with 58%. Prague as the capital is obviously more interesting for international capital than Brno or Ostrava. The second biggest percentage of capital comes from Germany (9%).
While there are multiple large owners in Prague, Brno and Ostrava are clearly dominated by CTP Invest with a 24% share in both markets. Czech companies own almost 90% of the office markets in Brno and Ostrava, confirming the fact that the local investors trust the market the most.
Most active developers of the last decade
Penta Investments has built the largest amount of office space, closely followed by Skanska, which has built the most office buildings in the last 10 years. CTP Invest is the third most active developer. While Skanska is focusing primarily on Prague, CTP builds most of its projects in the regions. “Both Skanska and Penta focus on the most popular office locations in Prague, although Penta clearly tends to prefer large urban complexes with multi-purpose use. In turn, Skanska is one of the undisputed leaders in sustainable development and both green and well-being certificates,” adds Radka Novak. Only 10% of developers do not sell their projects after completion. 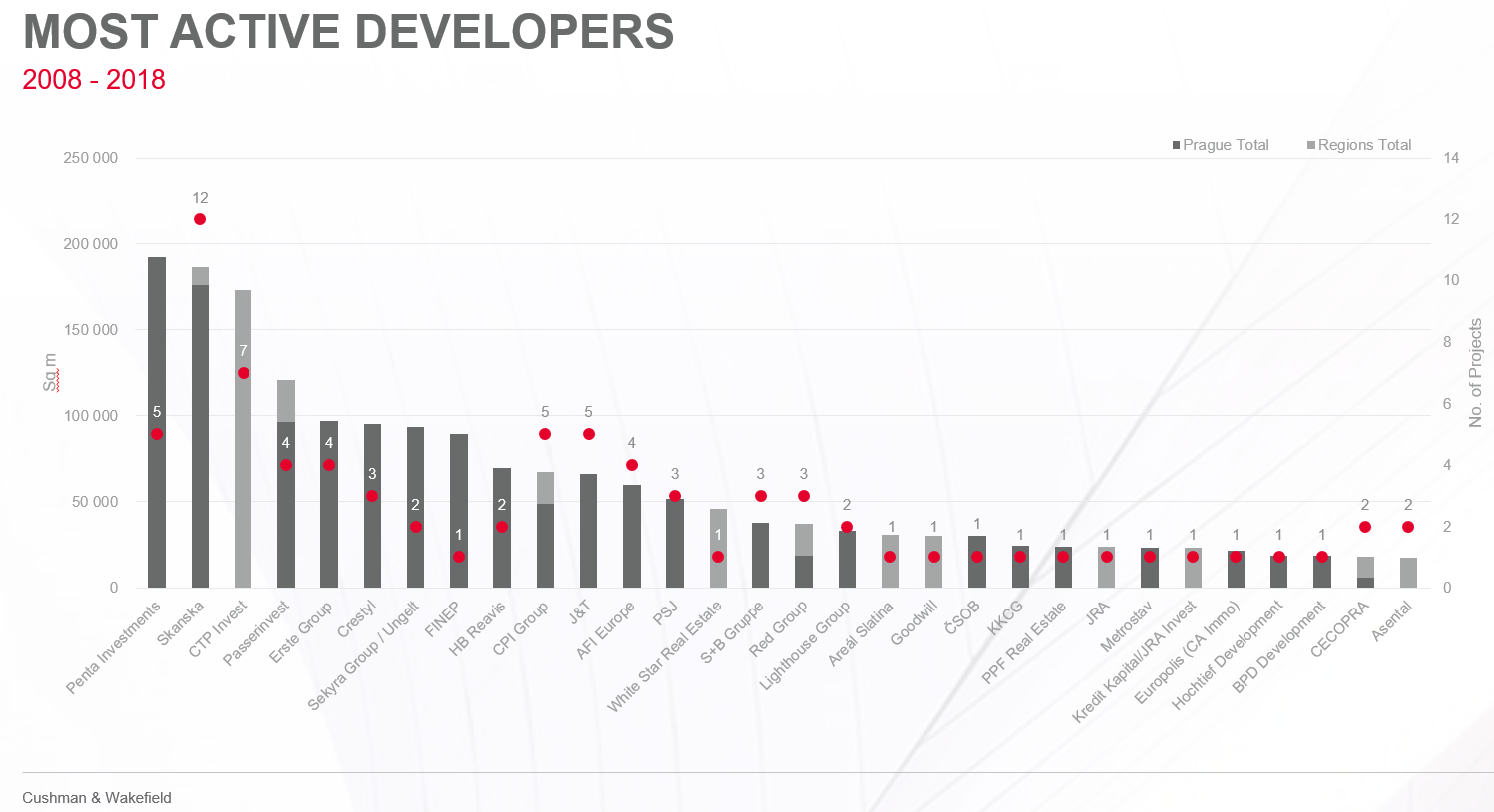 The greatest percentage of the current development of new office space and projects slated for launch in the nearest future is attributable to Sekyra Group and Skanska. This indicator will be the most prone to changes, though, because it is rather difficult to forecast how successful developers will be in obtaining building permits for major projects or their individual phases. Therefore the chart will be updated annually.
While Prague 4, Prague 5 and Prague 8 are popular locations for new development, refurbishment projects prevail in Prague 1. At this point, almost 380,000 sqm of new office space is under construction. Refurbishment accounts for up to 15% of total construction activities. The take-up of office space remains strong so that the majority of buildings are already fully occupied at the point of completion.

The report only monitors Class A and B office space stock in the main office markets in the Czech Republic, namely Prague, Brno and Ostrava. The report monitors office space only (e.g. not retail or other than office space than might be part of the property). These criteria apply to all information provided in this article.