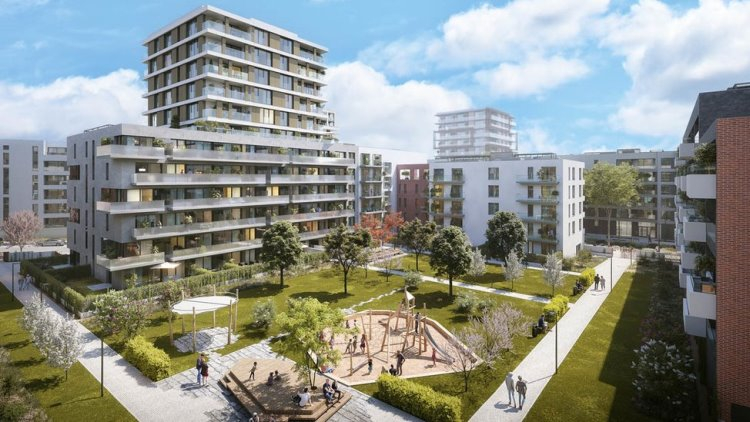 The largest new residential district in the Czech Republic, which will be built on a brownfield site, is starting construction in Prague 3 in Žižkov. It could house up to over 5,000 people. The planned investment is estimated at CZK 20 billion. According to the plans of the developer Central Group, the first inhabitants could move in as early as 2024. The entire Park District should be completed within ten years, the developer plans.


The construction of the largest new residential district in the Czech Republic, which is being built on a brownfield site, began yesterday with a tap on the foundation stone. Around 2,500 new flats, a large pre-school, a 1.5-hectare park, a pedestrian zone with water features and many new small shops, services, restaurants and cafes will be built on the 128,000sqm site in the northern part of the closed Žižkov freight station (Nákladové nádraží Žižkov) in Prague 3. The site of the former and no longer used railway station was currently used for warehouses and several shops. The total investment costs of the Park District are currently estimated at CZK 20 billion.

The first city block of the new district near Basel Square will be ready in mid-2024 and the construction of all seven blocks of the entire Park District could be completed within ten years. "Žižkov is and increasingly will be a great place to live. We have great confidence in this district. In total, we are preparing three large residential projects here - the Park District, the Centre of New Žižkov and, most recently, the residential district in Jarovo," says Dušan Kunovský, founder and head of Central Group. The general contractor for the initial phase is a consortium of large construction companies Syner and Imos, which guarantees minimised disturbing impact of the new construction on the surrounding area. Construction of the actual residential buildings is now beginning, but preparatory work and the construction of technical infrastructure have been underway in the area since May last year.

New apartments instead of the already permitted giant complex

Central Group's 13-hectare Park District land does not need a zoning change to build new apartments. The current zoning plan designates the area as SMJ - that is mixed-use development. Central Group purchased the land from the original developer, Discovery Group, at a high market price in 2016. It was already with a zoning decision and building permit issued for a large commercial and administrative complex, a hotel and two apartment buildings. However, the Prague 3 municipal district had reservations about the original project. Therefore, Central Group decided to cancel the project and start brand new. "The new residential project of the Park District is significantly smaller and lower as also the traffic load is significantly lower compared to the already approved giant commercial project of the original developer. The new traffic load, even when combined with the neighbouring upcoming Centrum Nové Žižkov project, is up to a third lower," Kunovský points out.

The aim of Central Group, in agreement with the city district and the Institute of Planning and Development (IPR), was to create a new residential neighbourhood with a lively ground floor with many small shops, services, restaurants and cafés. In this agreement, the investor undertook, among other things, to build and transfer to the ownership of the district a large catchment area of a 6-class pre-school with a kitchen garden and a large garden, as well as a 1.5-hectare public park and a green pedestrian zone with water areas.

Central Group commissioned architect Jakub Cigler's studio to create the urban and architectural concept for the Park District. In consultation with IPR and other experts, he created a concept of seven semi-closed city blocks with a pre-school, a park and a green pedestrian zone with water areas. This urban concept is based on the traditional urban development of Žižkov and neighbouring Vinohrady. Most of the new buildings will have six storeys, while selected ones will have 12 storeys. Based on the urban concept by the site's chief architect Jakub Cigler, Central Group has announced a major architectural workshop. As a result, 21 architectural concepts from nine different studios are being combined at the site. In addition to the architectural designs by Jakub Cigler and Central Group, the site features designs by Bogle, ADNS, Šafer Hájek, Chybik + Kristof, Loxia, Aulík Fišer and CMC.

Prague to receive over 1.5 billion for public infrastructure

The Žižkov freight station is the first large brownfield site where the municipality will use the new methodology for investor contributions to public infrastructure approved by the Prague City Council this year. Based on this methodology, the Prague City Council will collect more than CZK 1.5 billion in cash or investments in public infrastructure from investors in the transformation area of the wider Žižkov Freight Station.

"For the three sites that Central Group is preparing in Prague 3, our contribution amounts to CZK 651 million. This is the most of all investors in this urban district. Central Group will build three large pre-schools with 16 classrooms for 400 children and transfer them to the district of Prague 3 free of charge. It will also create large parks and quality public space for people from the new houses and the wider area to relax," adds Kunovský. Many small shops, services, restaurants and cafes will also be created on the ground floor of the new buildings, making the new neighbourhoods pleasant places to live.

Central Group is also building large technical and transport structures in the area for the wider neighbourhood, which would otherwise be a public investment of the capital. These include the complete reconstruction and completion of Basel Square and Jana Želivského and Malešická Streets, including the construction of new intersections. And in addition to all of these investments in public works, it will then contribute CZK 194 million to the city for its three upcoming sites for public primary schools and other public investments.