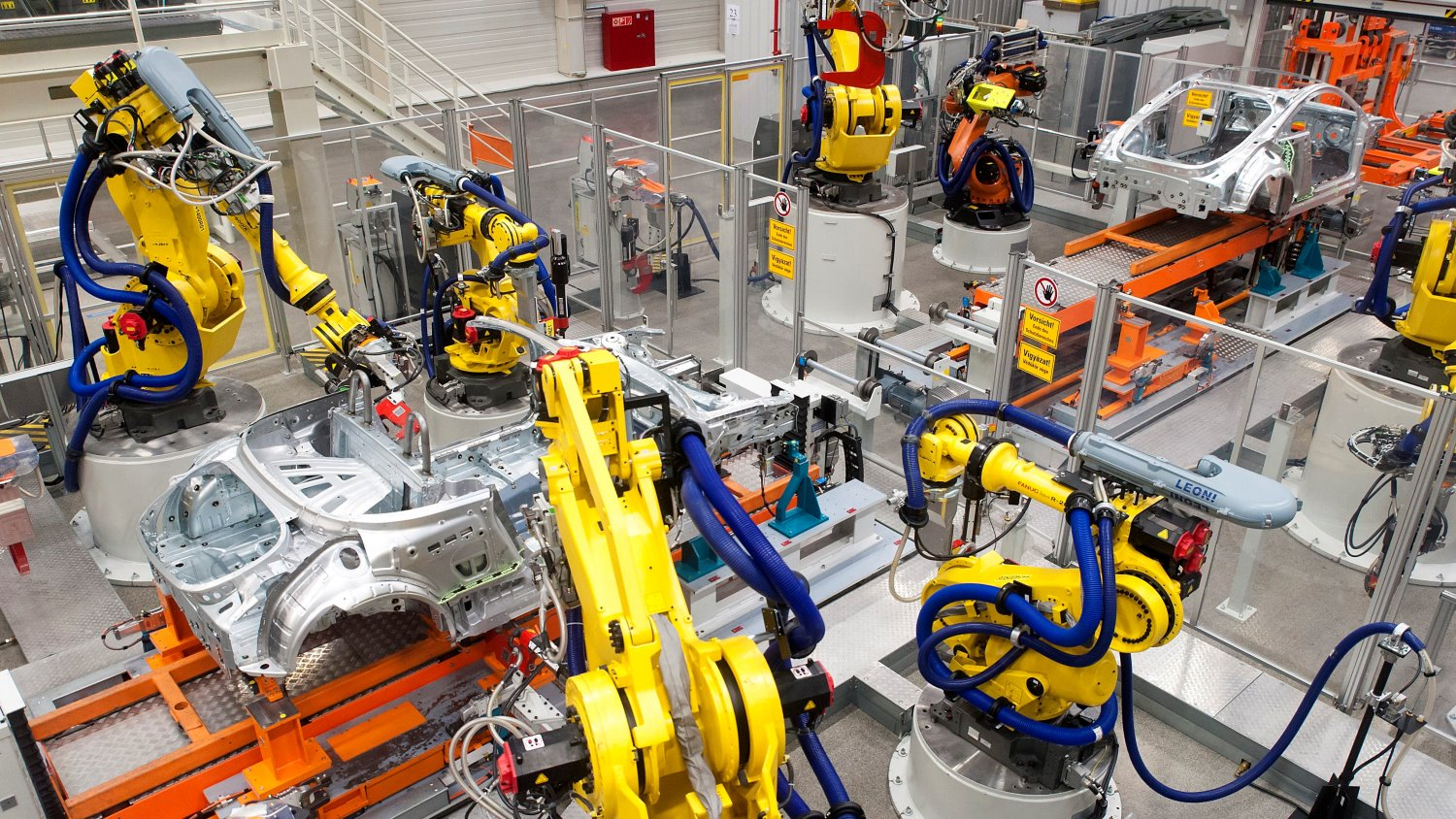 Manufacturing PMIs in CEE showed that the recovery slowed at the end of Q3 2020 and the carryover to Q4 2020 was small (and even negative in some cases). This assessment pertains also to the outlook, with new orders and output expectations either rising less or showing a slower recovery in September than in the previous months, according to Dan Bucsa, Chief CEE Economist at UniCredit Bank in London.


Throughout CEE, domestic demand seems to be playing a bigger role in the recovery than exports, in a clear change compared to pre-COVID-19 times. This is evident from the chart below, which shows that export orders are recovering less than total orders. The exception is Hungary, where the foreign component is actual exports, not export orders, so it is not forward-looking. The problem for most CEE countries is that foreign demand is very important for GDP and there cannot be a swift recovery without strong export growth. 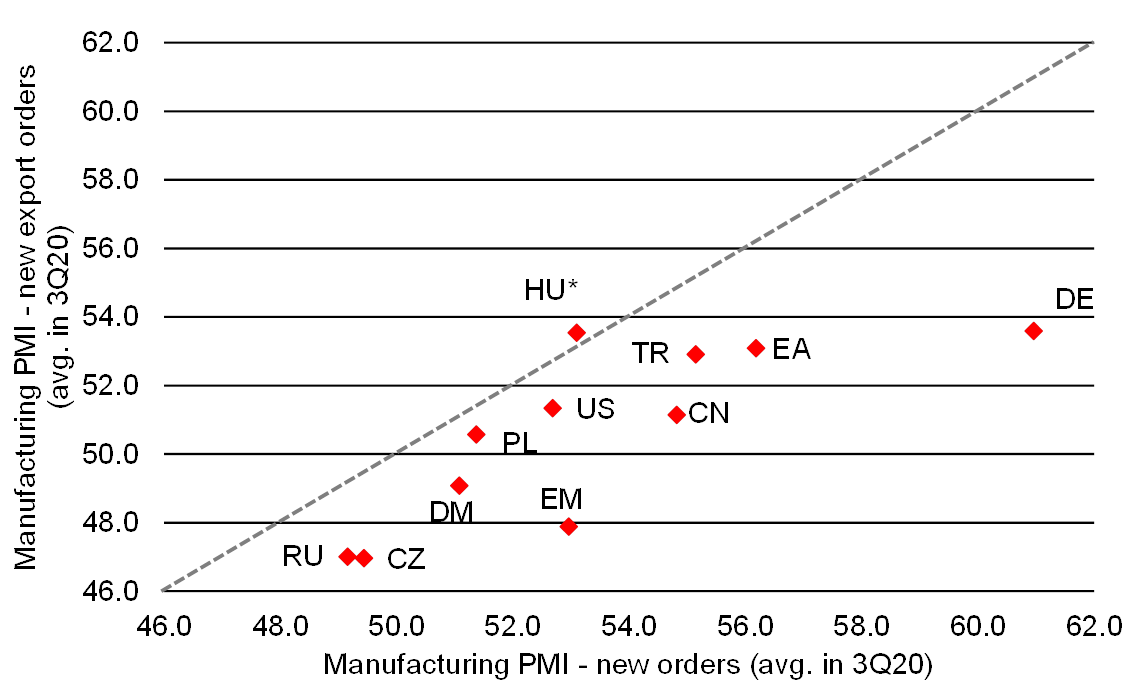 Part of the problem with foreign demand lies in the uncertain outlook for car purchases. Rising demand over the summer in large markets (US, Europe, China) and in CEE probably reflected orders that could not be filled before the COVID-19 pandemic. Meanwhile, demand has weakened in both developed and emerging markets and this may affect the outlook not only for car producers, but also for their extended network of suppliers. Ifo Institute data out of Germany regarding orders and output expectations in car manufacturing bode well for production in CEE but such optimism is not reflected in the assessment of central European manufacturers.

While employment has been recovering gradually, it lost momentum in September (see the chart below). This is despite a gradual return to work of employees furloughed during 2Q20. This is important because there is a risk the rebound in consumer demand will flatten out if households fear another wave of job losses. Bucsa believes that this is a real threat because of the approaching end of several support schemes. UniCredit’s latest CEE Quarterly looks at such schemes (furlough pay, loan moratoria, and tax rebates, deferrals and exemptions) throughout CEE. Many countries plan to extend support schemes if needed, but the scope to increase public spending significantly is narrowing. 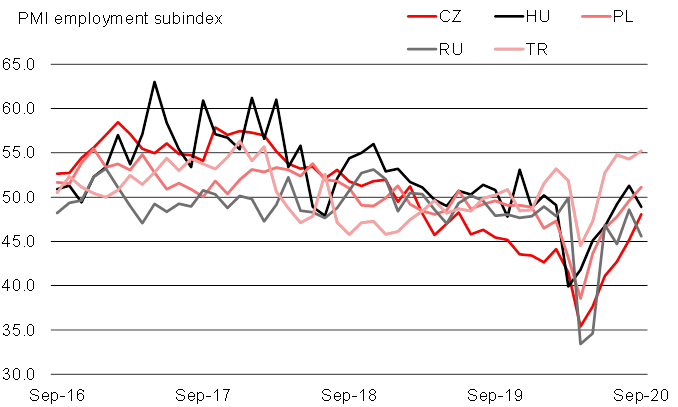 Meanwhile, consumer intentions with regard to making high-value purchases over the next twelve months remain subdued throughout CEE, as shown in the chart below. This is despite recovering wages throughout the region and the good financial position of households. Given UniCredit’s unemployment outlook, Bucsa expects households to postpone large purchases to H2 2021. 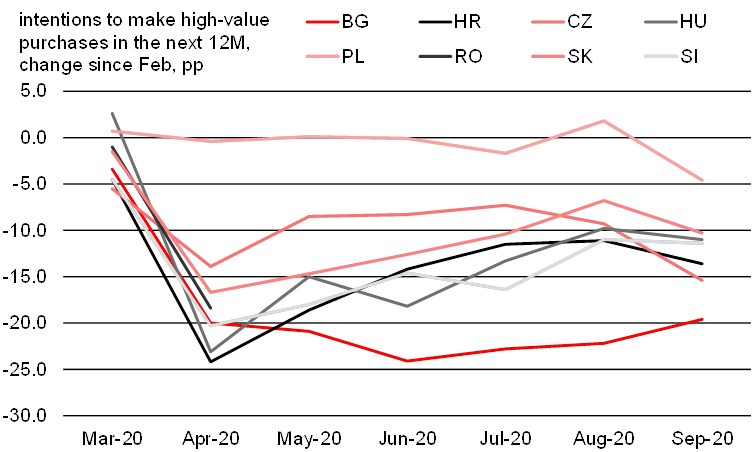 Dan Bucsa works as CEE economist at UniCredit Bank AG in London. He joined the bank in September 2012, transferring from UniCredit Tiriac Bank (Romania) where he was the chief economist. Dan has five years of experience as chief economist in the Romanian banking system. Before joining the private sector, Dan taught at the Bucharest University of Economic Studies and worked in the Macroeconomic Modelling and Forecasting Department of the National Bank of Romania, where he was involved in developing the forecasting framework used in inflation targeting. Dan holds a Ph.D. in macroeconomics and an M.Sc. in finance from the Bucharest University of Economic Studies, Romania. More »

Czechia: A slight increase in the manufacturing PMI to 50.7 in September from 49.1 in August signals that the contraction in Czech IP is finally over. The output index increased only slightly but most forward-looking sub-indices point towards a stronger expansion in activity: the future output index was up, as were the indices for orders, with domestic orders outpacing foreign orders. Even so, the latter showed export orders increasing for the first time since October 2018. At the same time, the backlog of works fell more in September than in August and employment continued to go down. Output prices rose at a slower pace, despite CZK depreciation in September. This lower supply pressure on prices will add to depressed domestic demand and push inflation lower in the coming months.

Hungary: The PMI computed by the Hungarian Association of Logistics, Purchasing and Inventory Management (HALPIM) fell to 48.8 in September. Orders and output fell compared to August as the government tightened virus-containment restrictions in September and delivery times increased. Employment contracted again after a rebound over the summer. Input prices accelerated at the fastest rate since the end of 2018. To some extent, this reflects the weaker HUF. Bucsa expects inflation in Hungary to diverge from the rest of CEE in the coming months, with the inflation target likely to be breached.

Poland: The manufacturing PMI was almost flat in September (50.8 vs. 50.6 in August). While output declined slightly in September, new orders increased, with export orders outpacing domestic orders (contrary to the trend in CEE). Employment expanded for the first time since June 2019, but this might have been due to the return of some furloughed workers. Output prices rose, probably due to PLN depreciation during September. However, price pressure remains low compared to 2018-19 and inflation is expected to fall closer to the target by year-end.