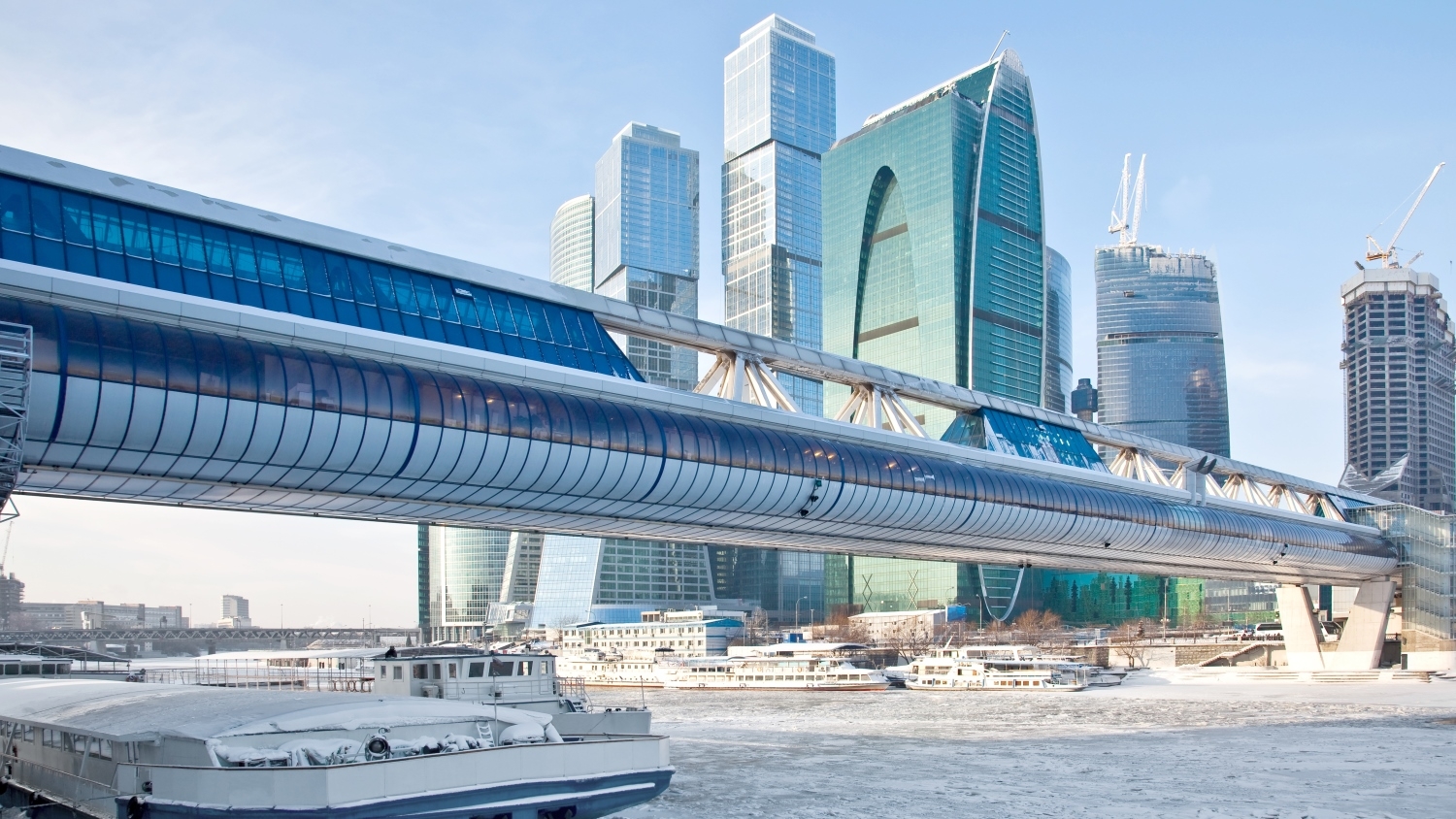 Investment volumes in Central and Eastern Europe (Poland, Slovakia, Hungary, Czech Republic, Russia and Turkey) reached €7 billion in H1 2017. This is 6% less than in the same period of the previous year.

European investors dominate the CEE commercial real estate investment scene with 46% share – the highest since 2010. Domestic investors are also active with 35% share. Only 19% of investment volume is coming from non-European players. Over the last 5 years, the strong shift from domestic investments towards European is observed. 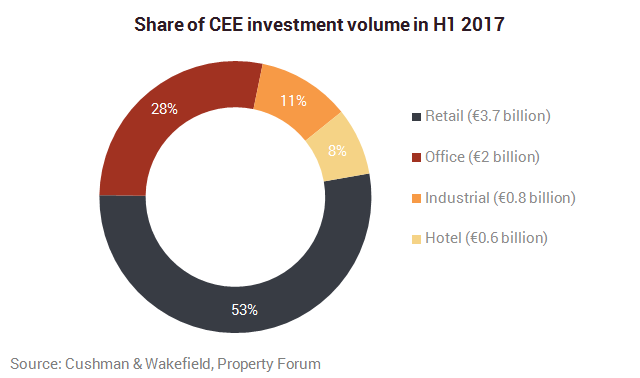 Retail investments are responsible for more than half of total investments in the region. Office sector performs weaker than in previous years. While Czech Republic is leading in retail and office investments with €1023 million and €590 million respectively, Hungary took leading position in warehouse sector with €305 million of investments.
This year retail is the most attractive sector for investors not only in volumes but also in ticket size. The top 3 deals in H1 2017, totalling €1 billion were closed in retail sector. This reflects robust consumer market in the region. With the exception of Russia and Turkey that are still suffering from economic and political turbulence, retail sales in the region grow at a healthy 5-6% per year (Oxford Economics). In 2017 Poland with 8% retail sales growth will be a powerhouse for consumer market in region. In 2018 – 2024 consumer market in Central Europe is expected to cool down to 3-4% annual growth. While in Russia consumer market is still suffering from crisis, investors are taking advantage of lower real estate prices in the view of expected economy recovery in 2018. 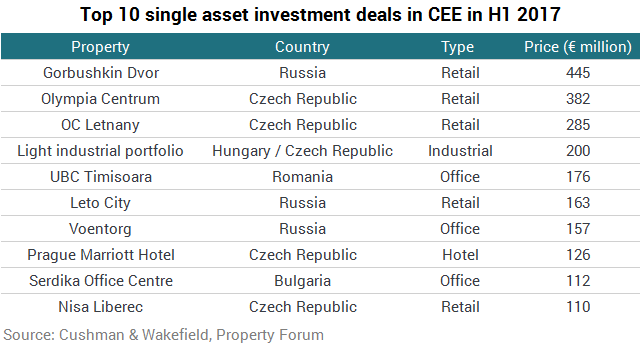 Czech Republic is leading in the region with €2.2 billion investment volumes, followed by Russia with €1.6 billion and Poland with €1.1 billion. Over the last 5 years, Russia was losing its position on capital markets scene, while Poland was gaining. Now investments are rather balanced: with 3 leaders and Hungary and Romania running up with €0.9 billion and €0.7 billion, respectively.
With robust retail sector and strong economy growth within the region, C&W expects investment volumes this year to beat previous year and exceed €17 billion. In 2018 – 2020, C&W expects further strengthening of investment market that can reach record levels of €20 billion. Economic recovery in Russia and Turkey will be driving volumes up due to the size of those markets. While Poland and Czech markets will remain as core markets in the region, Hungary and Romania will outperform in terms of growth rates.
C&W expects investments into office sector to catch up in second half of the year and outperform retail, reflecting strong outlook for economy growth and labour market in the region.
“We have had some landmark transactions over the past 12 months – Earlier this year we transacted a prime CEE retail and office portfolio to CPI of close to €700 million. This comprised 10 assets across 4 CEE countries. The story behind Griffin’s acquisition of Echo and subsequent creation and listing of Echo Polska Properties is one of great ingenuity and, at over €1 billion, it is large by global standards.
CEE has also been a major beneficiary of global capital flows. APAC investment has increased dramatically with major inflows including: CEFC’s Prague purchases, GIC’s €2 billion acquisition of the P3 logistics platform and CIC’s deal to buy Logicor which includes c. €1 billion in CEE. South African activity has been a significant part of the retail investment landscape across the whole CEE region and the depth of this capital flow is expected to increase in H2 2017 with GrowthPoint coming into Poland via the GlobalWorth platform as well as others.
However, for all the positive trends, there has been without question a lack of capital for regional city retail schemes, multi-let logistics and even Warsaw offices. This resulted in flat yields for many assets and even outward pressures in these specific sectors during the past 18 months.
The next 12 months will be different as investors are increasingly focusing on Central European strategies based upon the recognition that occupational markets are optimising whilst yields have not compressed to reflect this.
The occupational story highlights the Polish office sector as the top priority. Winning locations can be defined with low vacancy across new and established assets. They are characterised by transport infrastructure and amenities making them defensive against alternative locations without such benefits. This creates opportunity for core and core-plus strategies and the debt arbitrage provides a compelling investment rationale.
2017 will be seen as a year of mega deals leading to record investment volumes. In Poland, the Logicor, IKEA and CBRE GI deals will be followed by the c. €1 billion Metro retail portfolio changing hands whilst there are also large deals in the office and logistics sectors also underway. We expect 2018 – 2020 to consolidate such impressive transaction volumes with the growth of alternative investments providing new areas of opportunity for the increasing number of investors entering the market.
Alternative investments include rapidly developing sectors such as multi-family/student accommodation, dedicated F&B schemes, leisure and last-mile distribution solutions. We are also seeing more opportunities in fund recapitalisations providing platforms with scale for investors to enter the market.
With such emerging trends, there are also challenges to be overcome by the whole property industry. Valuers and investors will need to establish accepted practises for dealing with income streams from less predictable sources. At the same time they need to attribute value to assets that are better suited to new working, shopping and living trends.
CEE is entering into one of its most exciting phases in years. There is now a real reason to be optimistic”, commented James Chapman, International Partner, CEE Capital Markets at Cushman & Wakefield.