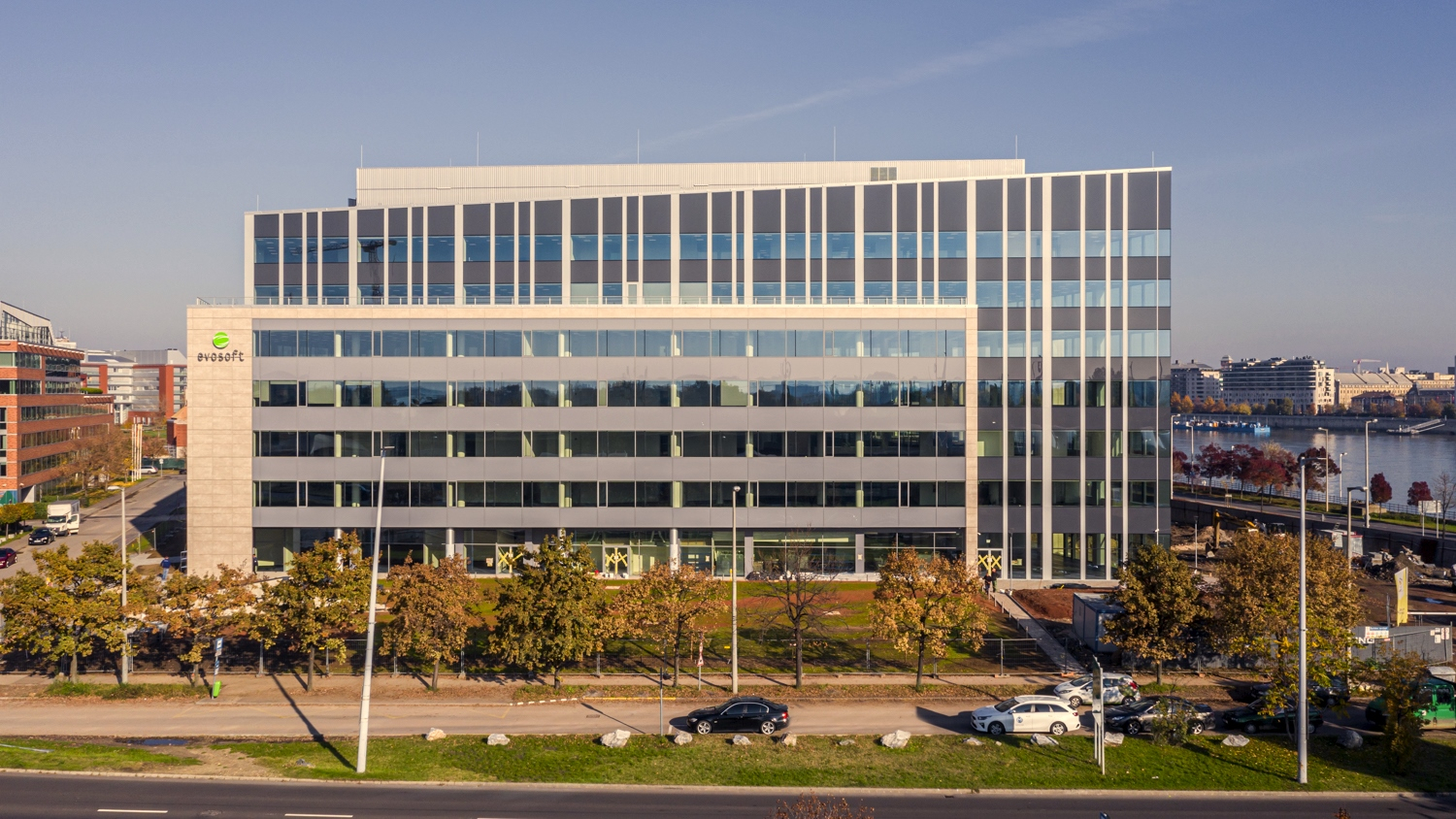 Developed by Wing, the brand-new headquarters building of evosoft Hungary Kft., a Siemens subsidiary, was completed on time and tailored fully to the tenant’s needs. Located at the Buda end of the Rákóczi Bridge, the 22,000 sqm complex was completed as part of the second phase of the Hungarian Nobel Prize Winners R&D Park. The building, home to a six-storey research and development facility, is equipped with cutting-edge technology and meets Gold-level environmental friendliness and energy efficiency LEED certification criteria. Evosoft is expected to begin moving into the building in December 2020.


With the completion of the new headquarters building, Wing – one of Hungary’s largest real estate development companies – is helping evosoft Hungary achieve the colocation of its activities, currently spread out over several facilities in Budapest. The new office building will provide a fitting HQ for the company, a world leader in R&D and the field of software development, offering employees an inspiring place to work.

The innovative, fully accessible, six-storey building is almost 22,000 sqm in size, of which some 19,400 sqm will be used to create office and research lab space for evosoft Hungary’s software developers. The building also includes a four-level underground parking garage, able to accommodate 520 automobiles. Constructed of quality materials and built according to Gold-level LEED environmental criteria, the building meets the highest-level environmental protection regulations and is equipped with environmentally conscious technical systems.

Evosoft Hungary Kft. is wholly owned by Siemens; the company deals with industrial software development in the fields of automation technology, integrated propulsion controls, medical imaging, electric vehicles and energy technology. The new headquarters will provide a home to evosoft’s almost 1400 employees, and will also meet all their digital needs. The proximity of the Budapest University of Technology and Economics and the Faculty of Informatics of the Eötvös Loránd University of Sciences – two institutions training the IT experts of the future – was a decisive factor when selecting the location of the building.

Infopark is majority-owned by Wing, which owns nearly 100,000 sqm of floor space in Infopark’s Buildings B, C, D and I, as well as the nearby Ericsson and evosoft HQs located on the Danube bank. Noah Steinberg, Chairman and CEO of Wing Zrt. highlighted: “It has always been a priority for us to create buildings which are in line with the objectives of the tenant companies and the expectations of the people who will work in them. Despite the extraordinary circumstances encountered in 2020 and the resulting challenges, the building was completed according to schedule and by the deadline specified. Developed by Wing and constructed by KÉSZ Kft., it is fully tailored to evosoft’s needs.”

Noah Steinberg is the chairman and chief executive officer of WING, the market leading office developer in Hungary and one of the largest privately held Hungarian real estate companies of which he is a shareholder. An American citizen, he has worked in Hungary since 1990. In his current position since 1999, he was responsible for establishing WING and oversees the company’s investment and development businesses, its office, retail, industrial, hotel and residential projects and its real estate services. He is also the Chairman of RICS in Hungary. Mr. Steinberg is a graduate of the Woodrow Wilson School of Public and International Affairs at Princeton University (BA), and the Diplomatic Academy of Vienna in Austria (MA). He speaks French, German, Spanish, Hungarian and English. More »

Evosoft’s HQ in Hungary was built as part of the second – final – phase of the Hungarian Nobel Prize Winners R&D Park, and is located next to the Ericsson Building, another Wing development.