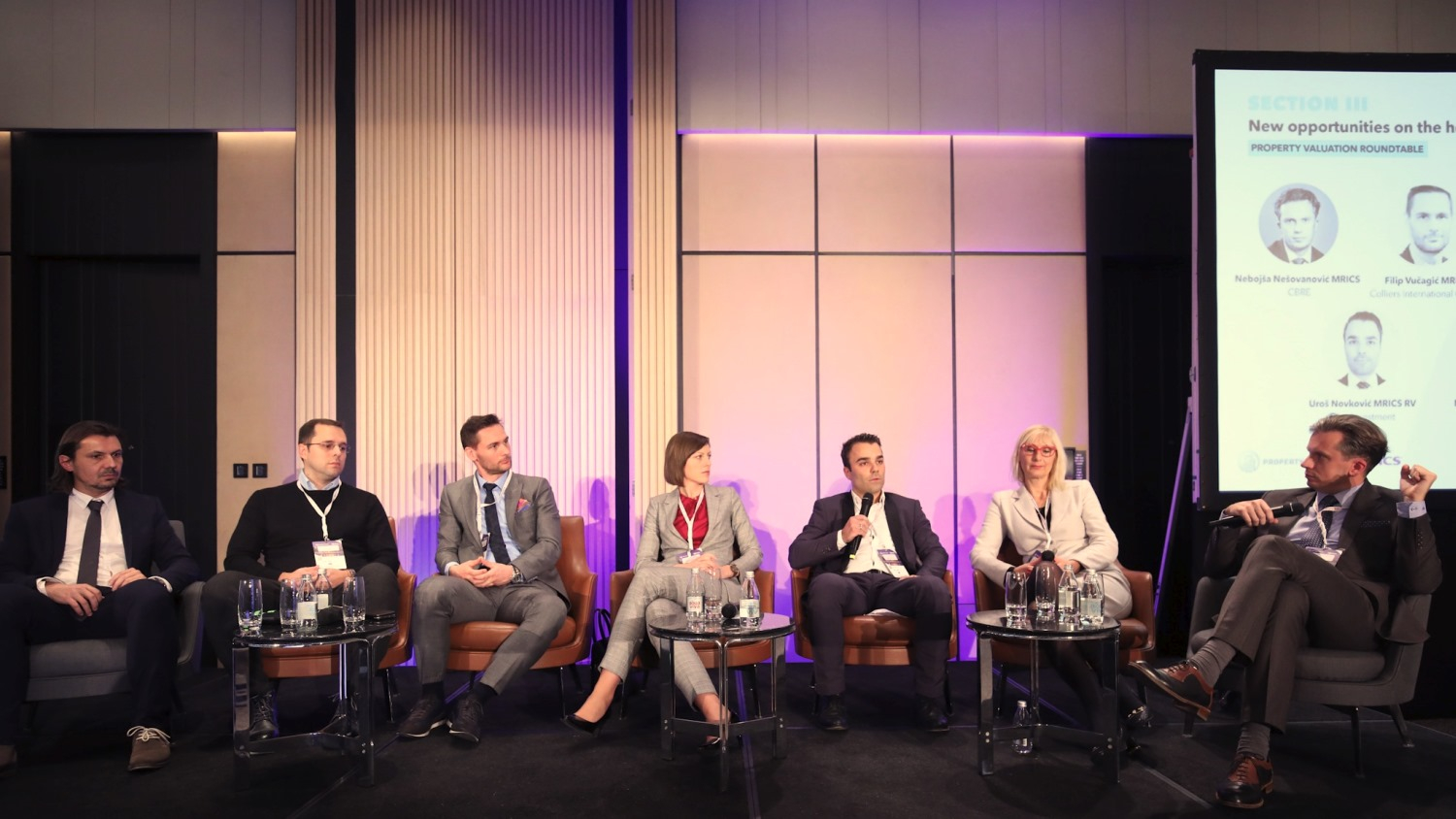 Market players are optimistic of the future of the SEE property market, according to the speakers of Balkans Property Forum 2018, co-organized by Property Forum and RICS in Belgrade, which brought together more than 150 industry experts.

„When prices in Central and Eastern European countries came almost to the level of Western Europe, a space for Southeast Europe, especially Slovenia Croatia, Bulgaria and Serbia, opened up,“ says Nebojša Nešovanović, Head of Valuation SEE, CBRE. According to him, although not a member of the EU, Serbia is very interesting for foreign investors because it is large enough and because it has an insufficiently developed real estate market.

Nebojša is responsible for CBRE’s Valuation and Advisory team in the SEE region, including Slovenia, Croatia, Bosnia and Herzegovina, Serbia, Montenegro, Bulgaria, Macedonia and Albania. In addition, he is a RICS Registered Valuer and a Serbian licenced valuer. Nebojša is accustomed to valuing all types of assets including offices, logistics, retail and land using various valuation methods and techniques. He had conducted and led appraisals ranging from football stadiums to large investment portfolios. Mr. Nešovanović has been involved in almost every relevant Real Estate project in Serbia, having performed and / or monitored in excess of five thousand valuations, feasibility studies, market and marketability studies, and highest and best use studies for various types of properties. He has been involved in hundreds of regional projects in SEE countries and his clients are the most important companies dealing in the Real Estate sector across the SEE region, including all major financial institutions, funds, investors, developers and large corporations.  More »
„We lack various facilities such as shopping centres, offices, as well as residential buildings. We are the last to develop shopping centres since all other cities completed their development seven or eight years ago. Three shopping centres are currently being built in Belgrade and having in mind the purchasing potential of citizens on an annual basis for the goods offered in shopping malls, there is probably room for one more,“ said Nešovanović, adding that although investors are slowly entering the residential market, construction activity it's still not strong enough.
Speaking about the residential market he noted that not enough new apartments are being constructed. The demand is much higher than the supply and this increases prices per square metre. In the last three years, prices have risen by 30% to 40%. Prices are still traditionally the highest in Dedinje, Vračar and in the centre, but the price per square metres in New Belgrade is also increasing and it currently reaches €2500. Apartments in new buildings are reserved at the pre-sales stage and customers are cash buyers, people from the diaspora, people who have successful businesses and want to invest in real estate, explained Nesovanovic and emphasized that credit buyers almost do not have a chance to buy a flat in a new building in Belgrade.
However, the desire and decision for investment, the funds provided and the selected location are not enough for investors to be successful. They continue to encounter unaccepted laws in this part of Europe, slow legal and bureaucratic procedures, legal insecurity, and often political tensions, according to the panel of international investors that gathered at the Forum
„Since 2014, a lot has been done in Serbia to reform the laws in order to better align with the EU legislation, especially when it comes to legal safety of investors, conversion of the rights to use construction land in ownership, solving of illegal objects, electronic procedures for issuing building permits, registration of real estate in the real estate cadastre, real estate transactions and establishment of the profession of public notaries, more efficient enforcement procedures... Accession to the EU would certainly bring even more investment, but there is still a lot to be done to improve legal security in terms of more efficient litigation and shortening their time, eliminating corruption at all levels. It is also necessary to reform tax administration, introduce electronic commerce, and reform tax laws so that they are clear and unambiguous. Complaints are not clear and transparent enough and need to be described step by step and introduce the possibility that a professional person as a counsellor participates on the side of the complaining person. In general, most laws and regulations describe the complaint system to a minimum, step by step, which is very important and raises transparency, and also adds to legal certainty, explained Ilic and emphasized that all investors who want to invest in a country are always thinking about an exit strategy, for this reason it is important to resolve all of the remaining shortcomings,“ explained Danijela Ilić, President of the National Association of Valuers of Serbia.

Danijela is qualified property valuer holding Recognized European Valuer professional mark with over 35 yeras of experinece in property industry, out of which 19 years of experience in property valuation in Serbia and in other countries. In 2008 she has set up valuaton company Operational Center of Asset Valuers which has dealt with major real estate development projects in Serbia including important government projects such as converting surplus military properties into civil uses, viability studies for new uses of brownfield locations and others. As of 2016, she is freelence consultant and consellor on numerous issues regarding real estate in Serbia. She is founder and President of National Association of Valuers of Serbia. Under her leadership, NAVS became a member of TEGoVA in 2011 and a REV awarding member of TEGoVA in 2012. She has participated in translation of EVS and IVS into Serbian languge as of 2007. Danijela is currently a member of the Board of The European Group of Valuers’ Associations (TEGoVA) and a memeber of TEGoVA’s European Valuation Practice and Methodology Board. She is also elected Chairman of TEGoVA Business Valuation Committee which proposes European Business Valuation Standards (EBVS) and defines the gap which experienced Real estate valuers should bridge in order to produce business valuation according to the EBVS. More »